DD Malayalam (Malayalam:ഡി.ഡി മലയാളം) is a Malayalam language television channel operated by India's national broadcaster Doordarshan. It is commonly known as DD4, although it is not officially used now. The name was changed to DD Malayalam after 1999. It is one of the 11 Indian regional language channels operated by Doordarshan. DD Malayalam broadcasts from Kudappanakunnu, Thiruvananthapuram, Kerala.

Though television made its entry in India on 15 September 1959 it took a quarter of a century to speak the language of most literate state of India - Kerala. The television broadcast in Malayalam -the language of Kerala - under the legacy of Doordarshan was formally launched by the then Chief Minister of Kerala Mr.K.Karunakaran on 1 January 1985 at Tagore Centenary Hall, Thiruvananthapuram, the capital city of Kerala.

The first ever television programme in Malayalam was a children's play entitled "Oru Koottam Urumbukal"-ഒരു കൂട്ടം ഉറുമ്പുകൾ (A Group of Ants) presented by Rangaprabhath Children's Theatre, Venjarammood, Kerala under the leadership of Mr.Kochunarayana Pillai. The play was written by legendary writer and academician in Malayalam Drama, Mr.G.Sankara Pillai. This first ever television programme in Malayalam was directed and produced by A.Anwar, one of the legendary TV Directors and Producers in Malayalam. 'Oru Koottam Urumbukal' was aired at 6.30 pm on 2 January 1985. The duration of this children's play was 15 minutes.

Initially there was a broadcast in Malayalam for just 70 minutes daily from 1830 hrs to 1940 hrs. The first ever news bulletin Malayalam (വാർത്തകൾ) was aired live at 1930 hrs on 2 January 1985. This live bulletin was produced by Mr.T.Chamiyar and presented by Mr.G.R.Kannan. The text and visual contents were edited by Mr. Baiju Chandran, Mr.A.Anwar and Mr.P.K.Mohanan.

The first ever tele-serial in Malayalam was a joint production of Doordarshan and UNICEF entitled "Oru Poo Viriyunnu"-ഒരു പൂ വിരിയുന്നു (A flower blossoms) which went on air in 1990. The serial was written and directed by Eravi Gopalan, A. Anwar and P.K. Mohanan.

While private channels are set their target to gather more commercial earnings than any other parameters of social development Doordarshan had relentlessly shown its social commitment for human development. DD Malayalam is no exception in this regard.

As part of public broadcaster Prasar Bharati’s nationwide strategy to wind up stations operating on the obsolete technology, Doordarshan shut down 11 analogue transmitting stations in Kerala.

DD Malayalam has entertainment serials, infotainment programmes, news and current affairs, social programmes and film programmes as its major content. DD Malayalam news Varthakal from its inception in 1985 was popular among the viewers for its crisp and 'to-the-point' presentation. 'Varthakal' speaks the 'best Malayalam' among the Malayalam TV Channels.

Kesavan Venugopal, better known by his stage name Nedumudi Venu, was an Indian actor and screenwriter from Kerala, who predominantly worked in Malayalam cinema. He acted in more than 500 films, primarily in Malayalam and also in Tamil in a career spanning nearly five decades. He wrote screenplays and directed one film. Nedumudi Venu won three National Film Awards and six Kerala State Film Awards for his various performances.

Thiruvananthapuram has long been a center of media. Kerala Chandrika, the first newspaper of the state, was published from Thiruvananthapuram in 1789. The media also enjoyed the patronage of the Travancore kings. In 1836, Swathi Thirunal, the Travancore king, organized a government press in the city. The first Superintendent of the Press was the Rev. Sperschneider. The press was under Samathanam Maistry, one of the first batch of workmen trained in the Nagercoil Press.

Biju Menon is an Indian actor who predominantly appears in Malayalam films, and also has a few Tamil and Telugu film credits. He made his debut in 1995 Malayalam film Puthran. In a career spanning over two decades, he has appeared in over 150 films, and has won two Kerala State Film Awards, two Filmfare Awards South and nine Asianet Film Awards. 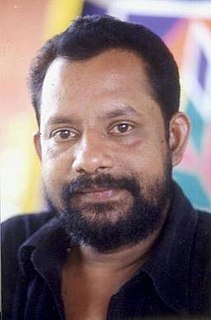 Girish Puthenchery (1961–2010) was a noted malayalam Lyricist, Poet, Scriptwriter and Screenwriter. He was always referred to as the aristocratic lyricist of malayalam who had a distinctive writing style of his own. He also served as the director of Indian Performance Rights Society Malayalam division (I.P.R.S) and governing council member of the Kerala Kalamandalam and Kerala Lalithakala Academy. He debuted with the movie Enquiry in 1989. He won the Kerala State Film Award for Best Lyricist seven times. He also holds the record for writing the highest number of songs in the malayalam film industry within the briefest period of time. He died on 10 february 2010 in a private hospital in kozhikode.

DD Chandana is a Kannada TV channel owned and operated by Prasar Bharati under Doordarshan, supported by Doordarshan studios in Bengaluru and Kalburgi. Launched in 1994 DD Chandana has entertainment serials, infotainment programmes, news and current affairs, social programmes and film programmes as its major content. In terrestrial mode, DD Chandana is available to 81.7% of the population of Karnataka. 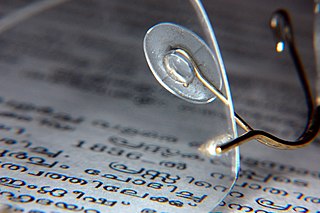 Media in Kerala, India are widely accessible and cater to a wide variety of audiences. Kerala has the highest media exposure in India with newspapers publishing in nine languages, mainly English and Malayalam. 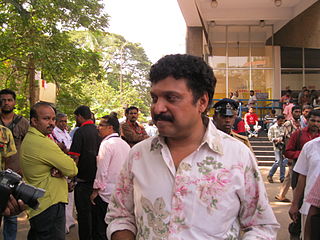 Praveena is an Indian actress and dubbing artist who predominantly appears in Malayalam film industry. 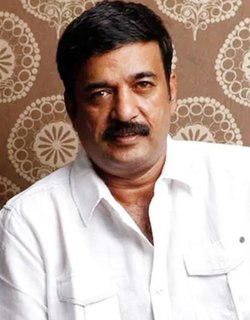 Anil Murali was an Indian actor in Malayalam cinema. He acted in more than 200 films. He started out in the film industry as a villain before later taking on character roles. He died on 30 July 2020 suffering from liver-related ailments.

Surya TV is an Malayalam-language Indian general entertainment pay television channel. The channel is part of Sun TV Network, which is headquartered at Thiruvananthapuram, Kerala.

DD Nagaland is an English TV channel owned and operated by Prasar Bharati under Doordarshan, supported by Doordarshan studios in Kohima and Dimapur. Launched in 1992 DD Nagaland has entertainment serials, infotainment programmes, news and current affairs, social programmes and film programmes as its major content. In terrestrial mode, DD Nagaland is available to 96.7% of the population of Nagaland.

Alagappan N is film director and producer in Indian cinema since active in 1977. He received graduate diploma in cinematography from the M.G.R. Government Film and Television Training Institute in Chennai. In 2013, he made his directional debut Malayalam romantic film Pattam Pole. The film tracks the relationship between a Hindu youth, Karthik, and a Christian girl, Riya.

R. Sreekandan Nair is an Indian television host, veteran journalist and Managing Director of Flowers and 24 News. He has hosted several Malayalam TV shows, including Oru Nimisham, Nammal Thammil, Janata Ki Adalath, and Samadooram. He was formerly a presenter on Doordarshan, the content head and senior Vice President of Asianet in the Kerala sector of India, and a consultant to the entertainment television operations of Mazhavil Manorama. He hosts a talk show called the Sreekandan Nair Show on Flowers TV. He achieved Guinness world record along with Flowers TV for hosting a TV talk-show for 6 hours and asked 674 questions on 18 March 2018.

Sayanna Varthakal is an upcoming Indian Malayalam-language political satire film written and directed by debutant Arun Chandu and produced by D14 Entertainments. Co-written by Sachin R Chandran and Rahul Menon, the film stars Gokul Suresh, Dhyan Sreenivasan, Aju Varghese and newcomer Sharanya Sharma in lead roles. The music of the film is composed by Prashant Pillai and Sankar Sharma, while the cinematography is handled by Sarath Shaji. It is reported that the movie tells the tale of a film actor and his life in a government-affiliated organisation.