David 'Davis' Pauly (Chemban Vinod) hails from Thrissur. His marriage with a lady (Sneha Sreekumar), arranged by his brother Sensilavos (Abi), is unsuccessful, after a bottle of alcohol, which one of his 'friends' sent him as a present and he hid, breaks in the church. Davy's aunt speculates that Joy Chembadan (Baburaj), Davy's classmate in school and now arch-nemesis, was the one who sent it to him.

Girija 'Giri' Vallabhan (Asif Ali) is from Pattikad and is naive. He is friends with Ambiyettan (Nandhu), an emigrant guru from another part of Kerala, who introduces him to Davy and his gang, consisting of Bahuleyan (Irshad), Philip Kannadakkaran (Rony David) and Alahu (Achuthanandhan), after a fight in the market with Joy's henchmen.

In a parallel storyline, Bhageerathi "Baaghi" is an honorable female auto driver trying to save two young girls (whom she knows, also her neighbor) from turning into prostitutes at the insistence of Ayyappan, a wicked man also Bhaagi's neighbor who is hellbent on forcing them to sell their bodies. It is also portrayed that the girls' father is in dire need of money, for which their mother, unable to pay the bills for her husband's operation, is ready to let her daughters be prostitutes.

Conflicts naturally occur between Davy and Joy. Once, when Joy orders film actress Nileena Mehndi (Shilpi Sharma) to inaugurate his shop, he shows off and looks down on Davy for not being able to do the same. Enraged by this, Davy decided to kidnap and coerce the one responsible for helping Joy get Davy, Rent-A-Star Mansoor (Sudeesh), Nileena Mehndi's assistant.

When Davy and their gang finally do succeed in capturing Mansoor, no matter how much they force him, he refuses to tell Nileena to back off the deal made with Joy (for which advance of 30 lakhs are collected). Infuriated, Davy barks at Sudeesh violently, forcefully stating that he was calling upon Nileena for an inauguration, and not for fornication. Unmoved by Davy's recklessness, Mansoor replies coolly, stating that although the withdrawal of Nileena's contract to Joy isn't possible, she would gladly spend a night with one person - only one person - in a one-night stand for 10 lakh rupees.

Shocked at this revelation, the gang lets him go. They, with deceit and helplessness, make up 10 lakh rupees. Amidst this, though, Joy embarrasses one of Davy's gang members by arresting him with his separated wife in a shady hotel falsely accusing him of adultery. After this, Davy swears to take revenge from Joy. They realize that only one of them can be the lucky one, so they put on a lucky draw, in which Giri is able to win. Hence, Giri heads to a hotel holding a suitcase filled with 10 lakh rupees, as per Mansoor's instructions. Meanwhile, outraged by how close he got to ruining the innocent women's lives through prostitution, Baaghi vengefully kills Ayyappan in a celebration.

A little time later, Davy and gang see on the news that Nileena will be retiring from her acting career temporarily due to cancer. Appalled, they visit the exact same hotel, where they notice that the bag of money is missing from Giri. They investigate with the help of Kozhikkaran Cheru (TG Ravi), Davy's friend and a local businessman, also a professional gambler and owns a local casino. Cheru tells them that Mansoor's actual name was Porinju. It is revealed that he was the driver of Cheru. Porinju stabbed Cheru and ran away with the money of Cheru.

After hearing the story of Cheru, the next day, they are able to corner Porinju (who was about to escape), where he reveals that when he went in the hotel room, even he wasn't able to find the money. Davy hands him over to Joy, who was also scammed of his money. When they reach their residence, they find Baaghi there, who confesses to have taken the money for the operation. She says that, in return for the money, she is willing to sleep with any one of them, for one night.

In the end, Davy has finally gotten a girl all thanks to Joy who has now understood his mistake, and Giri and Baaghi have fallen in love with each other, thwarting Baaghi's plan of "just a one-night stand".

The film is produced by Fareed Khan and Shaleel Azeez under the banner of Whitesands Media House. Asif Ali and Aparna Balamurali plays the lead roles. [4] On September 2016, Shooting began in Thrissur. [5] [6]

All songs were composed by Bijibal.

Josh is a 2000 Indian Hindi-language romantic action film directed and co-written by Mansoor Khan. The film stars Shah Rukh Khan, Aishwarya Rai Bachchan, Chandrachur Singh and Sharad Kapoor. The film, which is primarily in Hindi with occasional Konkani, was set and filmed in Goa. The film is set in the year 1980, amidst the backdrop of real estate deals and communal violence in Goa.

Deepak Devraj Komath, better known as Deepak Dev is an Indian music composer, best known for his compositions in Malayalam cinema, with films such as Chronic Bachelor, Udayananu Tharam, Naran, Puthiya Mukham,Urumi, Grandmaster and Bhaskar the Rascal. Dev is also a former member of the Indian rock band Motherjane. 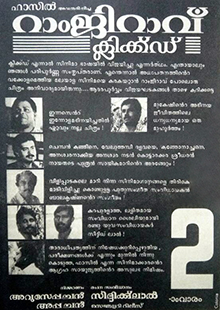 Ramji Rao Speaking is a 1989 Indian Malayalam-language comedy-thriller film written and directed by the duo Siddique–Lal and produced by Fazil, Swargachitra Appachan, and Ousepachan Vaalakuzhy. It stars Sai Kumar, Mukesh, Innocent, Rekha, Vijayaraghavan and Devan, with Sankaradi, Sukumari, Kunchan and Mamukkoya in other supporting roles. The film deals with social factors affecting Kerala including unemployment during the 1980s, and went on to achieve a cult classic status.

Olavum Theeravum is a 1970 Indian Malayalam-language drama film directed by P. N. Menon, written by M. T. Vasudevan Nair, and produced by P. A. Backer. It stars Madhu and Ushanandini, with Jose Prakash, Philomina, and Nilambur Balan in supporting roles. The film has a musical score by M. S. Baburaj. Cinematography was done by Mankada Ravi Varma.

Agent Vinod is a 2012 Indian Hindi-language action spy film written and directed by Sriram Raghavan produced by Saif Ali Khan and Dinesh Vijan. The film borrows its name from the 1977 film of the same name, and stars Saif Ali Khan and Kareena Kapoor in the lead roles, while Ram Kapoor, Prem Chopra, Shahbaz Khan and Adil Hussain appeared in prominent roles. Ravi Kishan made a special appearance in the film. 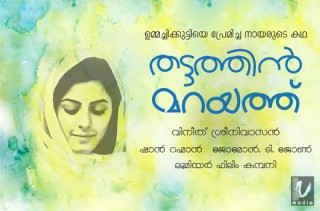 Idiots is a 2012 Indian Malayalam-language romantic comedy film, the debut of director K S Bava. The film stars Asif Ali and Sanusha, and was co-produced by prominent filmmaker Sangeeth Sivan. 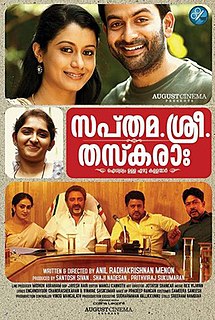 Darvinte Parinamam is a 2016 Indian Malayalam-language action comedy film film directed by Jijo Antony. It stars Prithviraj Sukumaran, Chemban Vinod Jose, Chandini Sreedharan and Balu Varghese in the lead roles. Written by Manoj Nair, it revolves around the life of an ordinary man and a local goon, and how their lives are affected by some unfortunate events. The soundtrack and background score for the film is composed by Shankar Sharma. The film started rolling in Fort Kochi from 1 October 2015. 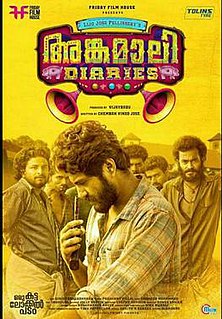 8 Thottakkal is a 2017 Indian Tamil-language crime thriller film written and directed by Sri Ganesh. Produced by Vellapandian, the film stars his son Vetri, alongside an ensemble cast including Aparna Balamurali, Nassar and M. S. Bhaskar and Meera Mithun. Principal photography of the film commenced in August 2016 at Chennai and was completed in November 2016. The film released on 7 April 2017. This movie, which was loosely inspired by the 1949 Japanese movie Stray Dog was remade in Kannada in 2018 as 8MM Bullet and in Telugu in 2021 as Senapathi.

Porinju Mariam Jose is a 2019 Indian Malayalam-language period action thriller film directed by Joshiy and written by Abhilash N. Chandran. Joju George, Nyla Usha, and Chemban Vinod Jose portrays the titular characters, and also features Rahul Madhav, Vijayaraghavan, and Sudhi Koppa in supporting roles. The original soundtrack of the film was composed by Jakes Bejoy. The story is loosely based on events that occurred in 1980s-1990s Thrissur.

Churuli (ചുരുളി) is a 2021 Indian Malayalam-language science fiction horror film directed by Lijo Jose Pellissery and written by S. Hareesh, starring Vinay Forrt, Chemban Vinod Jose, Joju George, Soubin Shahir and Jaffar Idukki in key roles. The film was produced by Lijo Jose Pellissery and Chemban Vinod Jose under the banner of Movie Monastery and Chembosky Motion Pictures, with Jesto Varghese, O Thomas Panicker and Naushad Salahudin as co-producers. The original story and characters are based on a short story Kaligaminarile Kuttavalikal from the book Mullaranjanam written by Vinoy Thomas.

Innale Vare is an Indian Malayalam-language film, which is directed by Jis Joy and produced by Mathew George. The film stars Asif Ali and Antony Varghese in lead roles. The film was directly released on SonyLIV OTT platform on 8 June 2022.