Last updated October 12, 2020
Brief sexual relationship
For other uses, see One-night stand (disambiguation).
Not to be confused with nightstand.

A one-night stand is a single sexual encounter in which there is an expectation that there shall be no further relations between the sexual participants. The practice can be described as "sexual activity without emotional commitment or future involvement". [1]

The one-night stand is the most common form of infidelity [1] and is often used in research, polls and surveys to define the level of promiscuity in a society at any given time. [2] It has also been suggested that such an act can be as threatening to a relationship as a long-term affair:

A one-night stand can be more dangerous than finding a lover with mutual considerations. This scenario is good for the business traveler who has the odds in his or her favor; however, it is very important to know with whom you are getting into bed, even for just one night. No one should be exempt from causing you a problem, no matter the distance or circumstance. A one-night stand is still a form of infidelity and can be just as damaging for you and your partner if discovered. [3]

The prevalence of one-night stands has been abetted by the advent of online dating apps such as Tinder and Grindr, which allow people to connect for purposes including sexual encounters, although these tools can also be used to seek longer-term relationship partners. [6]

Relationship therapist Laura Berman suggests that the circumstances that lead to such an encounter do not necessarily preclude a later relationship:

Certainly, having sex on a first date can be a death knell if your partner decides that a one-night stand is all he is after. On the other hand, many happy couples broke that rule of no sex on the first date and have been together for years. [7]

In contrast to a one-night stand, when the individuals involved have recurrent sexual contact without romantic involvement, this is considered a casual sexual relationship. [8] [9] [10]

A one-night stand may also be included in a sexual fantasy. [11]

Cybersex, also called computer sex, Internet sex, netsex and, colloquially, cyber or cybering, is a virtual sex encounter in which two or more people connected remotely via computer network send each other sexually explicit messages describing a sexual experience. Cybersex is a sub-type of technology-mediated sexual interactions. Cybersex is a sub-type of technology-mediated sexual interactions. In one form, this fantasy sex is accomplished by the participants describing their actions and responding to their chat partners in a mostly written form designed to stimulate their own sexual feelings and fantasies. Cybersex often includes real life masturbation. Environments in which cybersex takes place are not necessarily exclusively devoted to that subject, and participants in any Internet chat may suddenly receive a message of invitation. The quality of a cybersex encounter typically depends upon the participants' abilities to evoke a vivid, visceral mental picture in the minds of their partners. Imagination and suspension of disbelief are also critically important. Cybersex can occur either within the context of existing or intimate relationships, e.g. among lovers who are geographically separated, or among individuals who have no prior knowledge of one another and meet in virtual spaces or cyberspaces and may even remain anonymous to one another. In some contexts cybersex is enhanced by the use of a webcam to transmit real-time video of the partners. Non-consensual cybersex occurs in cybersex trafficking crimes.

The concept of interpersonal relationship involves social associations, connections, or affiliations between two or more people. Interpersonal relationships vary in their degree of intimacy or self-disclosure, but also in their duration, in their reciprocity and in their power distribution, to name only a few dimensions. The context can vary from family or kinship relations, friendship, marriage, relations with associates, work, clubs, neighborhoods, and places of worship. Relationships may be regulated by law, custom, or mutual agreement, and form the basis of social groups and of society as a whole.

An affair is a sexual relationship, romantic friendship, or passionate attachment between two people without the attached person's significant other knowing. 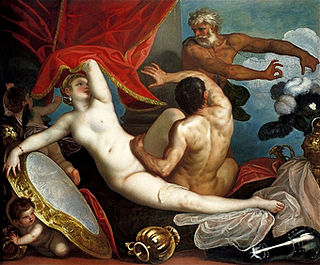 Infidelity is a violation of a couple's assumed or stated contract regarding emotional and/or sexual exclusivity. Other scholars define infidelity as a violation according to the subjective feeling that one's partner has violated a set of rules or relationship norms; this violation results in feelings of anger, jealousy, sexual jealousy, and rivalry.

Sociosexuality, sometimes called sociosexual orientation, is the individual difference in the willingness to engage in sexual activity outside of a committed relationship. Individuals who are more restricted sociosexually are less willing to engage in casual sex; they prefer greater love, commitment and emotional closeness before having sex with romantic partners. Individuals who are more unrestricted sociosexually are more willing to have casual sex and are more comfortable engaging in sex without love, commitment or closeness.

Casual sex is sexual activity that takes place outside a romantic relationship and implies an absence of commitment, emotional attachment, or familiarity between sexual partners. Examples are sexual activity while casually dating, one-night stands, prostitution, or swinging.

Lesbian bed death is the concept that lesbian couples in committed relationships have less sex than any other type of couple the longer the relationship lasts, and generally experience less sexual intimacy as a consequence. It may also be defined as a drop-off in sexual activity two years into a long-term lesbian relationship.

The term emotional affair is used to categorise or explain a certain type of relationship.

Dating is a stage of romantic relationships in humans whereby two people meet socially with the aim of each assessing the other's suitability as a prospective partner in an intimate relationship. It is a form of courtship, consisting of social activities done by the couple, either alone or with others. The protocols and practices of dating, and the terms used to describe it, vary considerably from country to country and over time. While the term has several meanings, the most frequent usage refers to two people exploring whether they are romantically or sexually compatible by participating in dates with the other. With the use of modern technology, people can date via telephone or computer or just meet in person. 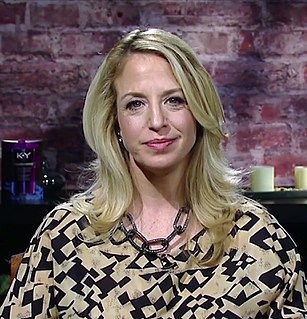 Laura Berman is an American relationship therapist and TV host. She is the host of In the Bedroom with Dr. Laura Berman on the Oprah Winfrey Network (OWN). She is also a regular guest on The Dr. Oz Show, and hosts her own nationally syndicated radio program, Uncovered with Dr. Laura Berman. She previously starred in Showtime's reality TV series, Sexual Healing. 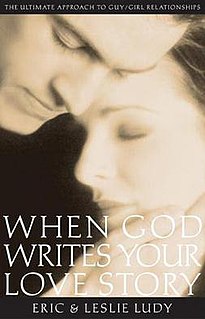 When God Writes Your Love Story: The Ultimate Approach to Guy/Girl Relationships is a 1999 book by Eric and Leslie Ludy, an American married couple. After becoming a bestseller on the Christian book market, the book was republished in 2004 and then revised and expanded in 2009. It tells the story of the authors' first meeting, courtship, and marriage. The authors advise single people not to be physically or emotionally intimate with others, but to wait for the spouse that God has planned for them. The first edition was packaged with a CD single by the Ludys: "Faithfully", a song they had written specifically to accompany the book.

A hookup culture is one that accepts and encourages casual sex encounters, including one-night stands and other related activity, without necessarily including emotional intimacy, bonding or a committed relationship. It is generally associated with Western late adolescent sexuality and, in particular, United States college culture. The term hookup has an ambiguous definition because it can indicate kissing or any form of physical sexual activity between sexual partners. The term has been widely used in the U.S. since at least 2000. It has also been called nonrelationship sex, or sex without dating. 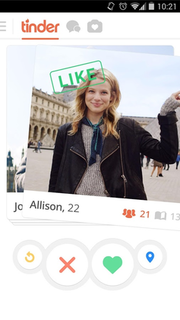 Tinder is an American geosocial networking and online dating application that allows users to anonymously swipe to like or dislike other profiles based on their photos, a small bio, and common interests. Once two users have "matched", they can exchange messages. 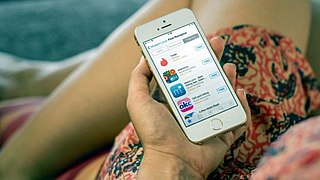 Hook-up culture refers to a culture built on the approved practice of engaging in hook-ups, or sexual encounters between two or more individuals where it is understood that commitment, relationships, and emotional feelings are not expected outcomes. Defining a hook-up is ambiguous because it can have a variety of meanings ranging from casual Kissing to foreplay and oral sex, or in some cases, it can mean participating in sexual intercourse. Hook-ups typically only last a short time and those involved are typically only interested in experiencing sexual intimacy and pleasure. Not all hook-ups can be classified as "one-night stands", however, since some people believe they can eventually lead to dating or more personal connections. While people have engaged in casual sex for many years, the act of "hooking-up" has become increasingly popular on college and university campuses in the United States over the last decade. Hooking up has become common for many college students, and the practice has replaced more traditional 20th century ideas about dating. Furthermore, social media sites like Facebook or Match, and phone applications like Grindr and Tinder have given users an opportunity to form connections with other people who have similar sexual interests or desires. Studying hook-up culture focuses on its influences on the formation and management of friendships and romantic relationships. The growth of hook-up culture is also shaping gender roles, specifically in regards to sexual behavior. Aside from these aspects of hook-ups, taking part in uncommitted sex can lead to potential negative physical and emotional impacts.