Group sex most commonly takes place in a private sex party or semi-public swinger gathering, but may also take place at massage parlors or brothels or, in some jurisdictions, at purpose-built locations such as sex clubs. In places where non-monogamous sex is taboo or illegal, group sex may take place in private or clandestine locations including homes, hotel rooms, or private clubs.

Fantasies of group sex are extremely common among both men and women. [1] [2] Many forms of sexual behavior were reported by Kinsey's subjects, but the official Kinsey Reports website does not mention threesomes or group sex in the summary of Kinsey's findings. [3]

Group sex is a subgenre in pornographic films.

In principle, any sexual behavior performed by more than two people can be referred to as group sex, but various terms are used to describe particular acts or combinations of people. Many swingers argue that non-swingers have conflated the terms because of lack of understanding and that there are distinct differences among the terms with specific meanings as to number, intent, sexual orientation, and familiarity of the persons involved.

There are a number of types of sex parties:

A swinger party or partner-swapping party is a gathering at which individuals or couples in a committed relationship can engage in sexual activities with others as a recreational or social activity. [5]

Swinger parties may involve various group sex activities. Partners can engage in penetrative sex, known as "full swap", or choose to "soft swap" in which they engage only in non-penetrative sex. New swinging couples often choose a soft swap before they are comfortable with a full swap, although many couples stay soft swap for personal reasons. [6] "Soft swinging" is when a couple engages in sexual activities with only each other while other couples perform sex acts in the immediate vicinity. [7] Technically this is a form of exhibitionism rather than "group sex" per se.

A daisy chain refers to a sexual act involving three or more people, during which each person simultaneously has sex with the person beside them in the group, thus forming a chain. [9] Some sources consider only groups of five or more people to be a daisy chain, [10] and some define the term to require all participants be female except one male.[ citation needed ]

As with all sexual activity, the relative risks of group sex depend on the specific activities engaged in, although having a large number of sexual partners increases one's risk of exposure to sexually transmitted infections (STIs).

From the mid-1980s there was active lobbying against gay bathhouses, blaming them for the spread of STIs, in particular HIV, and this forced closures in some jurisdictions, particularly in the United States. [14] [15] Sociologist Stephen O. Murray, writes that, "there was never any evidence presented that going to bathhouses was a risk-factor for contracting AIDS." [16] In other countries, fears about the spread of STIs have prompted the closing of bathhouses—with their private rooms—in favour of sex clubs, in which all sexual activity takes place in the open, and can be observed by monitors whose job it is to enforce safer sex practices. [17]

Proponents point out that venues where group sex takes place often provide condoms, dental dams, latex gloves, lubricants and other items for safer sex. Bathhouses in particular are a major source of safer sex information—they provide pamphlets and post safer sex posters prominently (often on the walls of each room as well as in the common areas), provide free condoms and lubricants, and often require patrons to affirm that they will only have safer sex on the premises. [18] [19] [20] [21]

The Sexual Offences Act 1967 decriminalized homosexual acts between two men over 21 years of age in private in England and Wales; [23] however, the privacy restrictions of the Act meant a third person could not participate in the sex or even be present, as well as that the two men could not have sex in a hotel. These restrictions were overturned in the European Court of Human Rights in 2000. [24]

Section 20A of the Immorality Act, 1957, [25] commonly known as the "men at a party" clause, was a South African law that criminalized all sexual acts between men that occurred in the presence of a third person. The section was enacted by the Immorality Amendment Act, 1969 and remained in force until it was found to be unconstitutional in 1998 by the Constitutional Court in the case of National Coalition for Gay and Lesbian Equality v Minister of Justice .

A 1996 sexual harassment case filed against Mitsubishi Motor Manufacturing of America by the Equal Employment Opportunity Commission (EEOC) highlighted corporate involvement by Mitsubishi in sex parties arranged by managers and other employees. [26]

Sex parties, under various names, have been a common focus of moral panics fed by media reports claiming that such parties are prevalent, or growing in prevalence, especially among teenagers. [29]

Several stories of this type arose in the US in 2003. In New York, rumors began that teens had been taking days off from school to attend "hooky parties" while their parents were at work. One school even suspended a group of girls for allegedly skipping school to attend such a party, refusing to let them to return to school until each had submitted to a medical examination for sexually transmitted diseases and pregnancy, and school officials were allowed to examine the results. The New York Civil Liberties Union filed a federal lawsuit against the school [34] on behalf of the girls and won a settlement which included monetary damages and a change in the school district's policy. [35]

A rainbow party is a baseless urban legend spread from the early 2000s. At these events, females wearing various shades of lipstick reportedly took turns fellating males in sequence, leaving multiple colours on their penises, [36] ignoring the fact that in such a situation the colors would blend. Rainbow parties were covered on The Oprah Winfrey Show in 2003, and became the subject of a juvenile novel called Rainbow Party. [36] On May 27, 2010, the television program The Doctors discussed the topic with dozens of teens, parents, and professionals. However, sex researchers and adolescent health care professionals have found no evidence for the existence of rainbow parties, and as such attribute the spread of the stories to a moral panic. [36]

Similar stories concerning teenagers using gel bracelets as coupons or signals for sex also arose at the time, with a similar lack of corroborating evidence. [37]

Swinging, sometimes called wife swapping, husband swapping or partner swapping, is a sexual activity in which both singles and partners in a committed relationship sexually engage with others for recreational purposes. Swinging is a form of non-monogamy and is an open relationship. People may choose a swinging lifestyle for a variety of reasons. Many cite an increased quality and quantity of sex. Some people may engage in swinging to add variety into their otherwise conventional sex lives or due to their curiosity. Some couples see swinging as a healthy outlet and means to strengthen their relationship. 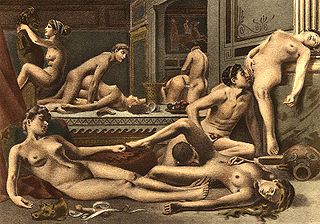 Open marriage is a form of non-monogamy in which the partners of a dyadic marriage agree that each may engage in extramarital sexual relationships, without this being regarded by them as infidelity, and consider or establish an open relationship despite the implied monogamy of marriage. There are variant forms of open marriage such as swinging and polyamory, each with the partners having varying levels of input on their spouse's activities.

A gay bathhouse, also known as a gay sauna or a gay steambath, is a commercial space for men to have sex with other men. In gay slang, a bathhouse may be called just "the baths", "the sauna" or "the tubs". In general, a gay bath is used for having sexual activity rather than only bathing.

Casual sex is sexual activity that takes place outside a romantic relationship and implies an absence of commitment, emotional attachment, or familiarity between sexual partners. Examples are sexual activity while casually dating, one-night stands, prostitution, or swinging.

Non-monogamy is an umbrella term for every practice or philosophy of non-dyadic intimate relationship that does not strictly hew to the standards of monogamy, particularly that of having only one person with whom to exchange sex, love, and/or affection. In that sense, "nonmonogamy" may be accurately applied to extramarital sex, group marriage, or polyamory. It is not synonymous with infidelity, since all parties are consenting to the relationship structure, partners are often committed to each other as well as to their other partners and cheating is still considered problematic behavior with many non-monogamous relationships.

Plato's Retreat was a swingers' club in Manhattan, New York City, United States, operating from 1977 until 1985 and catering to heterosexual couples and bisexual women.

Gay bathhouses in the United Kingdom are referred to as "gay saunas" as opposed to gay bathhouse, the term more commonly used in North America. There are gay saunas throughout the UK in most major cities.