Last updated October 10, 2020
Sex without the use of a condom

The term appeared occasionally in print until the 1980s and then in context to the AIDS epidemic and the discussion of sexual practices. It did not have widespread use in LGBT culture until 1997, when there was an increase of discussion regarding condomless sex (as reflected in print publications). [7]

Initially used for contraceptive purposes, condoms also came to be used to limit or prevent sexually transmitted infections (STIs/STDs), even after other contraceptive methods were developed. As AIDS emerged and the sexual transmission of HIV became known in the 1980s, the use of condoms to prevent infection became much more widespread, especially among men who have sex with men (MSM) who engage in anal sex. At the beginning of the AIDS crisis, in the context of the invention and development of safe sex, the uptake of condoms among Western MSM was so widespread and effective that condom use became established as a norm for sex between men. From 1995, several high-profile HIV positive men[ who? ] declared their refusal to wear condoms with other HIV positive men in gay publications, dubbing the practice barebacking. While these early articulations of barebacking expressed a concern for HIV prevention, in that they generally referred to dispensing with condoms in the context of sex between people of the same HIV status, the moral panic which ensued was so pronounced that barebacking came to be framed as a rebellious and transgressive erotic practice for HIV positive and HIV negative people alike, irrespective of the risks of HIV transmission. [11]

Academic works suggest that barebacking is a way to reach for transcendence, to overcome the boredom of everyday average life in a hyper-rationalized society. [14] Some men are dispensing with condoms in the context of seroconcordant sex (sex between two men of the same HIV status). Early articulations of barebacking generally refer to sex between two HIV-positive men, whereby barebacking could be considered an early harm reduction strategy, similar to serosorting, which was later endorsed by some public health authorities in the USA. [11]

An extreme form of barebacking is bugchasing, in which seronegative gay men actively seek to be infected with HIV. [2] [17] These men may seek to contract HIV in order to not have to constantly live in fear of becoming infected. [2] [18]

Serosorting, also known as serodiscrimination is the practice of using HIV status as a decision-making point in choosing sexual behavior. Frequently the term is used to describe the behavior of a person who chooses a sexual partner assumed to be of the same HIV serostatus in order to engage in unprotected sex with them for a reduced risk of acquiring or transmitting HIV/AIDS. 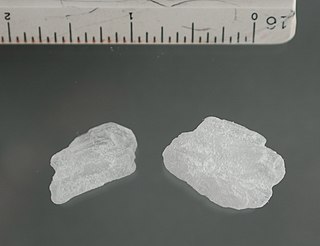 Party and play is the consumption of drugs to facilitate or enhance sexual activity. Sociologically, it refers to a subculture of recreational drug users who engage in high-risk sexual activities under the influence of drugs within sub-groups. This can include little use of condoms during sessions with multiple sexual partners that may continue for days.

Michael Shernoff was an openly gay psychotherapist who specialized in serving the mental health needs of gay, lesbian, and bisexual people and was author of several influential publications on the topics of HIV/AIDS prevention and the mental health concerns of gay men. 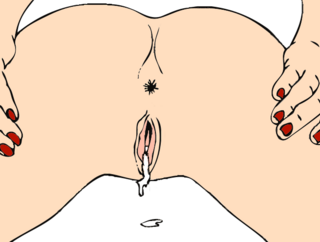 The affected community is composed of people who are living with HIV and AIDS, plus individuals whose lives are directly influenced by HIV infection. This originally was defined as young to middle aged adults who associate with being gay or bisexual men, and or injection drug users. HIV-affected community is a community that is affected directly or indirectly affected by HIV. These communities are usually influenced by HIV and undertake risky behaviours that lead to a higher chance of HIV infection. To date HIV infection is still one of the leading cause of deaths around the world with an estimate of 36.8 million people diagnosed with HIV by the end of 2017, but there can particular communities that are more vulnerable to HIV infection, these communities include certain races, gender, minorities, and disadvantaged communities. One of the most common communities at risk is the gay community as it is commonly transmitted through unsafe sex. The main factor that contributes to HIV infection within the gay/bisexual community is that gay men do not use protection when performing anal sex or other sexual activities which can lead to a higher risk of HIV infections. Another community will be people diagnosed with mental health issues, such as depression is one of the most common related mental illnesses associated with HIV infection. HIV testing is an essential role in reducing HIV infection within communities as it can lead to prevention and treatment of HIV infections but also helps with early diagnosis of HIV. Educating young people in a community with the knowledge of HIV prevention will be able to help decrease the prevalence within the community. As education is an important source for development in many areas. Research has shown that people more at risk for HIV are part of disenfranchised and inner city populations as drug use and sexually transmitted diseases(STDs) are more prevalent. People with mental illnesses that inhibit making decisions or overlook sexual tendencies are especially at risk for contracting HIV. 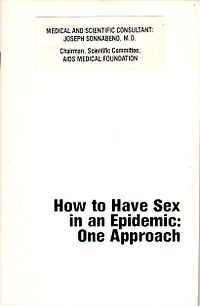 How to Have Sex in an Epidemic: One Approach is a 1983 manual by Richard Berkowitz and Michael Callen, under the direction of Joseph Sonnabend, to advise men who have sex with men (MSM) about how to avoid contracting the infecting agent which causes AIDS. It was among the first publications to recommend the use of condoms to prevent the transmission of STDs in men having sex with men, and has even been named, along with Play Fair!, as one of the foundational publications in the advent of modern safe sex.

Since reports of the human immunodeficiency virus (HIV) began to emerge in the United States in the 1980s, the HIV epidemic has frequently been linked to gay, bisexual, and other men who have sex with men (MSM) by epidemiologists and medical professionals. The first official report on the virus was published by the Center for Disease Control (CDC) on June 5, 1981 and detailed the cases of five young gay men who were hospitalized with serious infections. A month later, The New York Times reported that 41 homosexuals had been diagnosed with Kaposi’s Sarcoma, and eight had died less than 24 months after the diagnosis was made. By 1982, the condition was referred to in the medical community as Gay-related immune deficiency (GRID), "gay cancer," and "gay compromise syndrome." It was not until July 1982 that the term Acquired Immune Deficiency Syndrome (AIDS) was suggested to replace GRID, and even then it was not until September that the CDC first used the AIDS acronym in an official report. 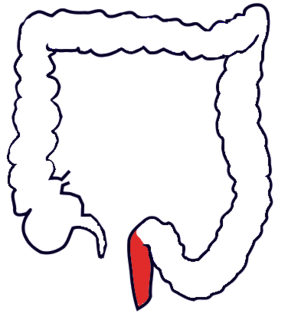