Last updated August 14, 2020
Introduction of semen or sperm into the genital tract of a female animal

Insemination is the introduction of sperm into a female animal’s reproductive system for the purpose of impregnating or fertilizing the female for sexual reproduction. The sperm is introduced into the uterus of a mammal or the oviduct of an oviparous (egg-laying) animal. In mammals, insemination normally occurs during sexual intercourse or copulation, but insemination can take place in other ways, such as by artificial insemination.

In humans, the act and form of insemination has legal, moral and interpersonal implications. However, whether insemination takes place naturally or by artificial means, the pregnancy and the progress of it will be the same. Insemination may be called in vivo fertilisation (from in vivo meaning "within the living") because an egg is fertilized inside the body, this is in contrast with in vitro fertilisation (IVF).

In plants, the fertilization process is referred to as pollination. It is the process of transfer of pollen grains from one anther to stigma of other plants.

Insemination of a woman by sexual intercourse is referred to as "natural insemination" (NI) (i.e., insemination by natural means). [1] Natural insemination involves ejaculation during penile–vaginal penetration, [2] with the erect penis deep inside the vagina, which is well lubricated. If an artificial lubricant needs to be used, care must be taken that it does not have spermicidal properties. [3] During ejaculation, semen, containing male gametes known as sperm, is expelled through the penis into the moist and warm environment of the female’s reproductive tract. The semen then passes from the vagina through the vaginal vault, cervix and into the uterus, and then into the fallopian tubes. The average volume of semen produced at ejaculation is 2 to 5ml (about 1 teaspoon). [4] Of the millions of sperm propelled during ejaculation, if an egg or ovum is present in a fallopian tube, fertilization may be achieved when any sperm reaches the ovum, at which point the objective of insemination is achieved.

In most cultures, insemination by a male through sexual intercourse, whether the woman's husband, normal sex partner or not, is subject to social and sexual inhibitions and taboos, and has legal, moral and interpersonal implications. [5]

The term is also used in the context of third-party insemination, where a male who is not the woman's usual sexual partner (i.e., a sperm donor) fathers a child for the woman by providing his sperm through sexual intercourse rather than by providing his sperm for it to be used to produce a pregnancy in the woman by artificial means. [6] The incidence of natural insemination by a sperm donor is usually a private matter, and may also carry greater health risks than where sperm has been processed by a fertility center. Advocates claim natural insemination generates higher pregnancy rates and a more 'natural' conception which does not involve the intervention and intrusion of third parties. However, it has not been medically proven that natural insemination has an increased chance of pregnancy. [7] Additionally, conceiving through natural insemination is considered a natural process, so the father may be liable for child support and have custody and other rights of the child. [7] The law usually draws a distinction between a man fathering a child by natural means, and a man who provides his sperm for it to be used to father a child by artificial means (i.e. by artificial insemination).

ICI attempts to simulate natural insemination, without the sexual element. It is painless and is the simplest, easiest and most common method of artificial insemination, and can be performed in the home, either by the female on herself or with non-professional assistance. ICI involves the introduction of unwashed or raw semen into the vagina at the entrance to the cervix, usually by means of a needleless syringe.

The sperm for insemination may be provided by either a sexual partner of the female’s choice or by a sperm donor. [10] Donor sperm is most commonly used by lesbian couples, single women, [11] and heterosexual couples when the male partner is suffering from male infertility. [12] There have been situations where a female has been inseminated with sperm collected from a female’s partner before him going off to war or even harvested after he has already died. [13] There are laws in some countries which restrict and regulate who can donate sperm and who is able to receive artificial insemination, and the consequences of such insemination. Subject to any regulations restricting who can obtain donor sperm, donor sperm is available to all women who, for whatever reason, want or need it. Some women living in a jurisdiction which does not permit artificial insemination in the circumstance in which she finds herself may travel to another jurisdiction (a 'fertility destination') which permits it. (See Sperm donation laws by country.)

Artificial insemination has been and continues to be commonly used in livestock breeding as an efficient way of increasing production. [14]

Other forms of insemination

In various other animal species, sperm can be introduced into the female's reproductive tract by various means. For example, in some species of hemiptera sperm can be introduced violently by traumatic insemination, parenteral injection through the body wall. In some species of animals, sperm finds its way through the body wall when the spermatophore is left in contact with the female's skin, such as in the onychophora (velvet worms). 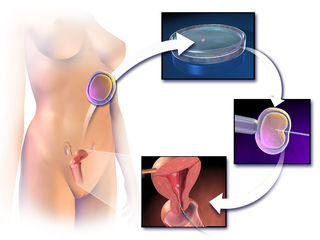 In vitro fertilisation (IVF) is a process of fertilisation where an egg is combined with sperm outside the body, in vitro. The process involves monitoring and stimulating a woman's ovulatory process, removing an ovum or ova from the woman's ovaries and letting sperm fertilise them in a liquid in a laboratory. After the fertilised egg (zygote) undergoes embryo culture for 2–6 days, it is implanted in the same or another woman's uterus, with the intention of establishing a successful pregnancy.

Infertility is the inability of a person, animal or plant to reproduce by natural means. It is usually not the natural state of a healthy adult, except notably among certain eusocial species. 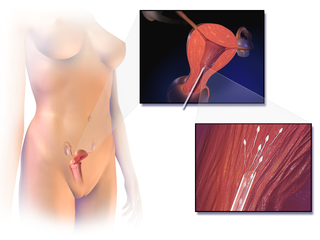 Artificial insemination (AI) is the deliberate introduction of sperm into a female's cervix or uterine cavity for the purpose of achieving a pregnancy through in vivo fertilization by means other than sexual intercourse. It is a fertility treatment for humans, and is common practice in animal breeding, including dairy cattle and pigs.

Vaginal lubrication is a naturally produced fluid that lubricates a woman's vagina. Vaginal lubrication is always present, but production increases significantly near ovulation and during sexual arousal in anticipation of sexual intercourse. Vaginal dryness is the condition in which this lubrication is insufficient, and sometimes artificial lubricants are used to augment it. Without sufficient lubrication, sexual intercourse can be painful. The vaginal lining has no glands, and therefore the vagina must rely on other methods of lubrication. Plasma from vaginal walls due to vascular engorgement is considered to be the chief lubrication source, and the Bartholin's glands, located slightly below and to the left and right of the introitus, also secrete mucus to augment vaginal-wall secretions. Near ovulation, cervical mucus provides additional lubrication. 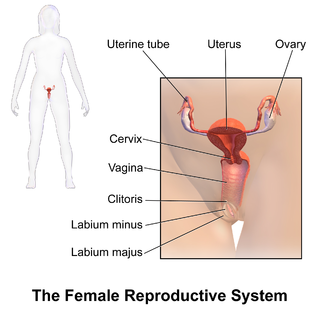 The female reproductive system is made up of the internal and external sex organs that function in reproduction of new offspring. In humans, the female reproductive system is immature at birth and develops to maturity at puberty to be able to produce gametes, and to carry a foetus to full term. The internal sex organs are the uterus, Fallopian tubes, and ovaries. The uterus or womb accommodates the embryo which develops into the foetus. The uterus also produces vaginal and uterine secretions which help the transit of sperm to the Fallopian tubes. The ovaries produce the ova. The external sex organs are also known as the genitals and these are the organs of the vulva including the labia, clitoris, and vaginal opening. The vagina is connected to the uterus at the cervix.

A sperm bank, semen bank or cryobank is a facility or enterprise which purchases, stores and sells human semen. The semen is produced and sold by men who are known as sperm donors. The sperm is purchased by or for women for the purpose of achieving a pregnancy or pregnancies other than by a sexual partner. Sperm sold by a sperm donor is known as donor sperm. Sperm is introduced into the recipient woman by means of artificial insemination or by IVF and the process may also involve donated eggs or the use of a surrogate.

Human reproduction is any form of sexual reproduction resulting in human fertilization. It typically involves sexual intercourse between a man and a woman. During sexual intercourse, the interaction between the male and female reproductive systems results in fertilization of the woman's ovum by the man's sperm. These are specialized reproductive cells called gametes, created in a process called meiosis. While normal cells contains 46 chromosomes, 23 pairs, gamete cells only contain 23 chromosomes, and it is when these two cells merge into one zygote cell that genetic recombination occurs and the new zygote contains 23 chromosomes from each parent, giving them 23 pairs. A typical 9-month gestation period is followed by childbirth. The fertilization of the ovum may be achieved by artificial insemination methods, which do not involve sexual intercourse. Assisted reproductive technology also exists.

Fertility clinics are medical clinics that assist couples, and sometimes individuals, who want to become parents but for medical reasons have been unable to achieve this goal via the natural course. Clinics apply a number of diagnosis tests and sometimes very advanced medical treatments to achieve conceptions and pregnancies. 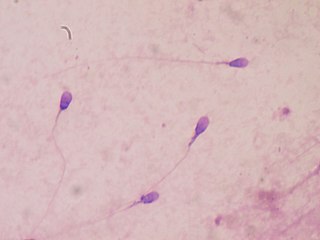 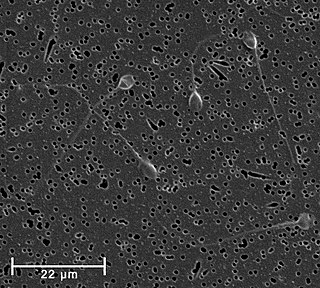 Semen, also known as seminal fluid, is an organic fluid created to contain spermatozoa. It is secreted by the gonads and other sexual organs of male or hermaphroditic animals and can fertilize the female ovum. In humans, seminal fluid contains several components besides spermatozoa: proteolytic and other enzymes as well as fructose are elements of seminal fluid which promote the survival of spermatozoa, and provide a medium through which they can move or "swim". Semen is produced and originates from the seminal vesicle, which is located in the pelvis. The process that results in the discharge of semen is called ejaculation. Semen is also a form of genetic material. In animals, semen has been collected for cryoconservation. Cryoconservation of animal genetic resources is a practice that calls for the collection of genetic material in efforts for conservation of a particular breed.

Pregnancy rate is the success rate for getting pregnant. It is the percentage of all attempts that leads to pregnancy, with attempts generally referring to menstrual cycles where insemination or any artificial equivalent is used, which may be simple artificial insemination (AI) or AI with additional in vitro fertilization.

A conception device is a medical device which is used to assist in the achievement of a pregnancy, often, but not always, by means other than sexual intercourse. This article deals exclusively with conception devices for human reproduction.

Sperm donation is the provision by a man of his sperm with the intention that it be used in the artificial insemination or other 'fertility treatment' of a woman or women who are not his sexual partners in order that they may become pregnant by him.

Unexplained infertility is infertility that is idiopathic in the sense that its cause remains unknown even after an infertility work-up, usually including semen analysis in the man and assessment of ovulation and fallopian tubes in the woman. 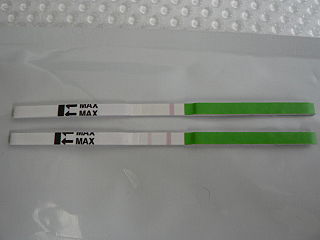 Fertility testing is the process by which fertility is assessed, both generally and also to find the fertile window. General health affects fertility, and STI testing is an important related field.