Matsu was born to a family of buyō and kabuki actors, including her father Matsumoto Hakuō II, her mother and businesswoman Noriko Fujima, her uncle, Nakamura Kichiemon II, her elder brother Matsumoto Kōshirō X, her sister Kio Matsumoto, and stage director Kazuhisa Kawahara.[ citation needed ] She married guitarist and record producer Yoshiyuki Sahashi on December 28, 2007. Her married name is Takako Sahashi (佐橋隆子, Sahashi Takako). She has the name of Natori of the Matsumoto school of Nippon Buyō (Japanese dancing); Shodai Matsumoto Kōka (初代 松本 幸華, "Kōka Matsumoto the First"). She chose the surname "Matsu" to honor the family. In an interview, she and her siblings are close to their mother. [1]

Matsu starred in her stage debut Ninjō-banashi: Bunshichi Mottoi at Kabuki-za. Her first television role was in the NHK Drama Hana no Ran and starred in the NHK drama Kura. Because Shirayuri Gakuen, her high school, prohibited working in the industry, she moved to Horikoshi High School. Matsu starred in the drama Long Vacation after matriculating to college. She had a supporting role, but established in full-scale her position, because the drama was a major hit. She hosted the 47th NHK Kōhaku Uta Gassen and debuted with the single "Ashita, Haru ga Kitara". She returned to the show as a singer on the last day of the year. In an interview with NHK, Matsu recalled the incident with her musical debut. She sang karaoke which was heard by the director who suggested she gave a song. Although she declined it and was not confident enough with the song, she accepted because she saw it as "[a] chance that not everyone got". [2] In the same year, she starred in the drama Love Generation in a leading role. She starred in Hero . She published a photo essay book, Matsu no Hitorigoto, through Asahi Shimbun Publishers. She released "Toki no Fune" in September 2004, which was composed by Akeboshi. It is similar to the song, "A nine days' wonder", which was released after the "Toki no Fune" single. The single contained a cover of Akeboshi's "White Reply" previously recorded on her sixth album, Harvest Songs. Matsu won the Best Actress of the Year of the 29th Hochi Film Award and the 28th Japan Academy Prize at the same time for The Hidden Blade . [3] In July 2006, she and Takuya Kimura starred in a special one-night edition of Hero. In October 2006, Matsu and Makoto Fujita starred in a weekly drama Yakusha Damashii. [4] Matsu left the third concert tour in May 2007 to commemorate her tenth year as a singer. In her album Cherish You, the song "Ashita Haru ga Kitara" was redone to combine her voice on her youth. On November 27, 2014, Matsu revealed on her official website that she was pregnant with her first child. Her daughter was born on March 30, 2015 and had 3466 grams. [5] On February 9, 2020, Matsu was called to join Idina Menzel, Aurora and eight more of Elsa's international dubbers to perform the song “Into the Unknown” at the 92nd Academy Awards. Every international performer sang one line of the song in a different languages, including Maria Lucia Rosenberg, Willemijn Verkaik, Carmen Sarahí, Lisa Stokke, Katarzyna Łaska, Anna Buturlina, Gisela and Wichayanee Pearklin. [6] Matsu worked with the producers. Her third album, Sakura no Ame, Itsuka was released at Universal Music.

Miho Konishi is a Japanese actress.

Jun Matsumoto, often called by the portmanteau nickname MatsuJun (松潤), is a Japanese actor, radio personality, model and singer. He is best known to Japanese television drama audiences for his portrayal as Dōmyōuji Tsukasa in the Hana Yori Dango series, in which he won GQ Japan's Man of the Year Award under the actor category for his work in the drama. 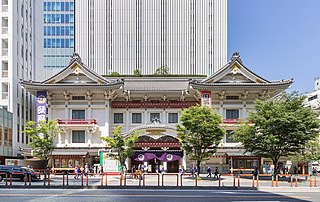 Kabuki-za (歌舞伎座) in Ginza is the principal theater in Tokyo for the traditional kabuki drama form. 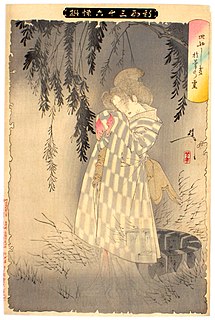 Banchō Sarayashiki is a Japanese ghost story (kaidan) of broken trust and broken promises, leading to a dismal fate. Alternatively referred to as the sarayashiki tradition, all versions of the tale revolve around a servant, who dies unjustly and returns to haunt the living. Some versions take place in Harima Province or Banshū (播州), others in the Banchō (番町) area in Edo. 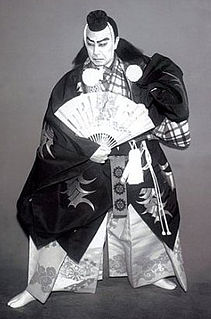 Matsumoto Kōshirō VII was a Japanese actor. He was one of the leading tachiyaku Kabuki actors of Japan's Meiji period (1868–1912) through the late 1940s.

The Shinbashi Enbujō is a theatre in the Ginza neighborhood of Tokyo, Japan. It is a major kabuki venue, though other types of performances take place there as well.

Jurina Matsui is a Japanese singer, actress, TV personality, and YouTuber. She is a former member of Japanese idol girl group SKE48 and former concurrent member of AKB48. She is recognized as SKE48's absolute "ace", having placed in the top 10 in many of AKB48's annual general elections and winning the 2018 election.

The discography of Japanese actress and singer-songwriter Takako Matsu includes nine studio, three compilation, two live, seven video albums, twenty-one singles, and twenty music videos. Born into a family of actors, Matsu made her debut as a stage performer before her roles in TV dramas and films. That year she released her first single, "Ashita, Haru ga Kitara", which peaked at number 8 on the Oricon Singles Chart and was certified platinum by the Recording Industry Association of Japan (RIAJ) for shipments of 400,000 copies. Matsu's debut album, Sora no Kagami, peaked at number 4 on the Oricon Albums Chart. Selling over 300,000 copies, it earned a platinum certification from the RIAJ and Matsu was named Best New Artist of the Year at the 12th Japan Gold Disc Awards.

"Ashita, Haru ga Kitara" is a song by Japanese entertainer Takako Matsu from her debut album, Sora no Kagami (1997). It was released on March 21, 1997, through BMG Japan as her debut single. The song was written by Yūji Sakamoto and Daisuke Hinata, while Hinata produced the song. Following the wrap-up of the drama Long Vacation, she decided to give singing a try upon the suggestion of one of its directors.

"Sakura Fuwari" is a song by Japanese actress and recording artist Takako Matsu, released as the second single from her second album, Ai no Tobira (1998). Released on March 25, 1998 through Arista Japan, the song's lyrics were penned by Matsu and production handled by Satoshi Takebe. The single peaked at number 9 on the Oricon singles chart. 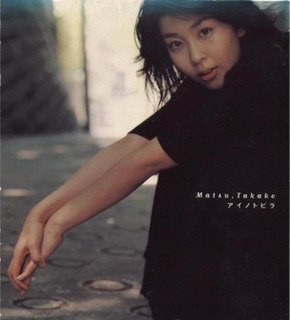 Ai no Tobira is the second studio album by Japanese actress and recording artist Takako Matsu. It was released on September 23, 1998, through Arista Records Japan. The album peaked at number 3 on the Oricon Albums Chart and was certified Gold by the RIAJ for shipment of 200,000 copies. The album has sold about 245,000 copies in Japan, as of June 2014. 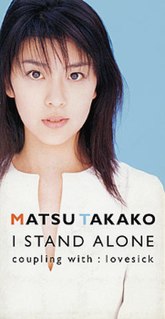 "I Stand Alone" is a song by Japanese singer and actress Takako Matsu, featured on her debut album Sora no Kagami (1997). It was released as the second single from the album in May 1997. The lyrics of the song were penned by Matsu and production handled by Daisuke Hinata. The single peaked at number 7 on the Oricon Singles Chart and was certified Gold by the Recording Industry Association of Japan (RIAJ).

Itsuka, Sakura no Ame ni... is the third studio album by Japanese actress and recording artist Takako Matsu. It was released on March 23, 2000 through Polydor Records in Japan. The album peaked at number 7 on the Oricon Albums Chart and was certified Gold by the Recording Industry Association of Japan (RIAJ). It has sold 194,000 copies in Japan as of July 2014.

Yu-ki Matsumura is a Japanese actor who has appeared in nine feature films, as well as a number of television series and theater productions. He is also a singer and has released eight albums and eight singles. He is represented with All-Stars Company.

Fujiko Fujima was a Japanese dancer. She was the first woman in the field of kabuki to be named a Living National Treasure.