Taxi to the Dark Side

Taxi to the Dark Side is a 2007 American documentary film directed by Alex Gibney, and produced by him, Eva Orner, and Susannah Shipman. It won the 2007 Academy Award for Best Documentary Feature. [1] It focuses on the December 2002 killing of an Afghan taxi driver named Dilawar, [2] who was beaten to death by American soldiers while being held in extrajudicial detention and interrogated at a black site at Bagram air base.

It was part of the Why Democracy? series, which consisted of ten documentary films from around the world questioning and examining contemporary democracy. As part of this series, the documentary was broadcast in over 30 countries from October 8–18, 2007. The BBC showed the film in its Storyville series.

Taxi to the Dark Side examines US policy on torture and interrogation, specifically the CIA's use of torture and their research into sensory deprivation. The film includes discussions against the use of torture by political and military opponents, as well as the defense of such methods; attempts by Congress to uphold the standards of the Geneva Convention forbidding torture; and popularization of the use of torture techniques in TV shows such as 24 .

The documentary concerns the death of Dilawar, an Afghan peanut farmer, who gave up farming to become a taxi driver and who died after several days of beating at Bagram detention center.

Dilawar left his home of Yakubi in eastern Afghanistan in the autumn of 2002, investing his family money in a new taxi to make money in a larger city. On 1 December 2002 he and three passengers were handed over to US military officials by a local Afghan warlord, accused of organising an attack on Camp Salerno. The warlord was later found guilty of the attack himself, but had been ingratiating himself (for $1000 per person) by handing over alleged terrorists.

Dilawar was held at the prison at Bagram Air Base, and given the prisoner number BT421. Chained from the ceiling, he received multiple attacks on his thighs, a standard technique viewed as "permissible" and non-life-threatening. It is likely that the severe attack caused a blood clot which then killed him. His official death certificate created by the US military to pass to his family, with his body, was marked "homicide". Medical conclusion stated that Dilawar's legs were "pulpified" and, had he lived, would have required amputation.

The film explores the background of increasingly sanctioned torture following 9/11 in contravention of the Geneva Convention and looks at the exposure of Abu Ghraib.

Interviews include Tim Golden of The New York Times who brought the case into the international spotlight, and Moazzam Begg, a British citizen imprisoned at the same time, and witness to the events. Military interviewees include Damien Corsetti the main interrogator, and Sgt. Anthony Morden. Cpt Christopher Beiring explains how he was the only person charged (charged with dereliction of duty).

The documentary claims that of the over 83,000 people incarcerated by US forces in Afghanistan up to 2007, 93 percent were captured by local militiamen and exchanged for US bounty payments. Also that 105 detainees had died in captivity and that 37 of these deaths had been officially classified as homicides up to 2007. [3]

The film also looks at Guantánamo Bay and how the same techniques were implemented there.

Taxi to the Dark Side appeared on some critics' top ten lists of the best films of 2008. Premiere magazine named it the fifth best film of 2008, [5] and Bill White of the Seattle Post-Intelligencer named it the seventh-best film of 2008. [5] The film also scored 100% for critic approval, out of 93 reviews on Rotten Tomatoes, with a weighted average of 8.34/10. The site's consensus reads: "Taxi to the Dark Side is an intelligent, powerful look into the dark corners of the War on Terror". [6] It also has a score of 82 out of 100 on Metacritic, based on 25 critics, indicating "universal acclaim". [7]

The film was named by the Academy of Motion Picture Arts and Sciences as one of 15 films on its documentary feature Oscar shortlist in November 2007, [8] [9] and won the Oscar on February 24, 2008. [10] In his acceptance speech for the "Best Documentary Feature" Academy Award, Gibney said:

This is dedicated to two people who are no longer with us, Dilawar, the young Afghan taxi driver, and my father, a navy interrogator who urged me to make this film because of his fury about what was being done to the rule of law. Let's hope we can turn this country around, move away from the dark side and back to the light. [10] [11]

In June 2008, Gibney's company filed for arbitration, arguing that THINKFilm failed to properly distribute and promote the film following its release and Oscar win. [15] [16]

Moazzam Begg is a British Pakistani who was held in extrajudicial detention by the US government in the Bagram Theater Internment Facility and the Guantanamo Bay detainment camp, in Cuba, for nearly three years. Seized by Pakistani intelligence at his home in Pakistan in February 2002, he was transferred to the custody of US Army officers, who held him in the detention centre at Bagram, Afghanistan, before transferring him to Guantanamo Bay, where he was held until January 2005.

Mullah Habibullah was an Afghan who died while in US custody on December 4, 2002. His death was one of those classed as a homicide, though the initial military statement described his death as due to natural causes. 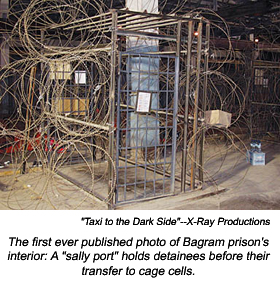 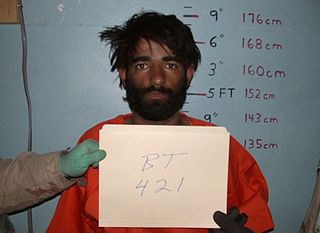 Dilawar, also known as Dilawar of Yakubi, was an Afghan taxi driver who was tortured to death by US army soldiers at the Bagram Collection Point, a US military detention center in Afghanistan.

Carolyn Wood, United States Army captain, is a military intelligence officer who served in both Afghanistan and Iraq. She was implicated by the Fay Report to have "failed" in several aspects of her command regarding her oversight of interrogators at Abu Ghraib. She was alleged by Amnesty International to be centrally involved in the 2003 Abu Ghraib and 2002 Bagram prisoner abuse cases. Wood is featured in the 2008 Academy award-winning documentary Taxi to the Dark Side. 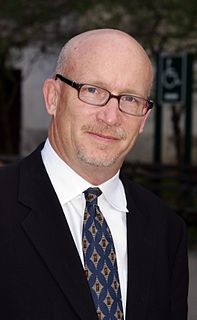 Philip Alexander Gibney is an American documentary film director and producer. In 2010, Esquire magazine said Gibney "is becoming the most important documentarian of our time". 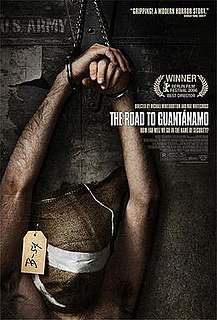 The Road to Guantánamo, alternatively The Road to Guantanamo, is a British 2006 docudrama film written and directed by Michael Winterbottom and Mat Whitecross about the incarceration of three British citizens, who were captured in 2001 in Afghanistan and detained by the United States there and for more than two years at the detainment camp in Guantanamo Bay Naval Base, Cuba. It premiered at the Berlinale on 14 February 2006, and was first shown in the UK on Channel 4 on 9 March 2006. 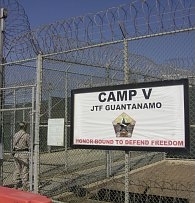 The Guantanamo Bay detention camp is a United States military prison located within Guantanamo Bay Naval Base, also referred to as Guantánamo, GTMO, and "Gitmo", which is on the coast of Guantánamo Bay in Cuba. As of January 2021, 731 of the 780 people detained were transferred, 40 remain and 9 died while in custody.

Selena M. Salcedo is a former United States Army soldier, who pleaded guilty to charges of dereliction of duty and assault in connection with the abuse of an Afghan prisoner, Dilawar, who later died. Salcedo was a member of the 519th Military Intelligence Battalion, serving under Lieutenant Carolyn Wood.

Damien M. Corsetti was a soldier in the United States Army. As part of the Army's investigation into prisoner abuse at Bagram, Corsetti was charged with dereliction of duty, maltreatment, assault and performing an indecent act with another person. PFC Corsetti was later found not guilty of all charges. At the time Corsetti was a specialist in the 519th Military Intelligence Battalion, serving under Lieutenant Carolyn Wood.

Jan Baz Khan is a citizen of Afghanistan who allegedly turned over innocent men to American troops in the beginning of the war in Afghanistan.

Eva Orner is an Australian Academy and Emmy Award-winning film producer and director based in Los Angeles. Her works include Untold Desires, Strange Fits of Passion, Taxi to the Dark Side, and Gonzo, The Life and Work of Dr Hunter S. Thompson. Orner's directorial debut, The Network, a feature documentary set behind the scenes of Afghanistan's largest television station, premiered in the US in March 2013.

Joshua R. Claus is a former member of the United States Army, whose unit was present at both Iraq's Abu Ghraib and at the Bagram Theater Detention Facility in Afghanistan, and was the first interrogator of Guantanamo detainee Omar Khadr. In 2005, he was found guilty of maltreatment and assault against an Afghanistan detainee who later died. 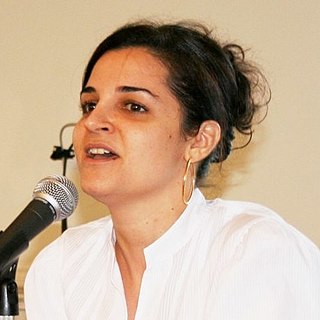 Tina Monshipour Foster is an Iranian-American lawyer and director of the International Justice Network.

Redha al-Najar is a citizen of Tunisia that was held in US custody in the Bagram Theater Internment Facility. He is notable for being one of a very small number of the detainees held in Bagram to have had a writ of habeas corpus submitted on his behalf.

Parkhudin is a citizen of Afghanistan who was held in extrajudicial detention in the Bagram Collection Point and in the United States Guantanamo Bay detainment camps in Cuba. His Guantanamo Internment Serial Number was 896.

On January 16, 2010, the United States Department of Defense complied with a court order and made public a heavily redacted list of the detainees held in the Bagram Theater Internment Facility. Detainees started to be held in primitive, temporary quarters, in what was originally called the Bagram Collection Point, from late 2001. Detainees were later moved to an indoor detention center until late 2009, when newly constructed facilities were opened.

Mea Maxima Culpa: Silence in the House of God is a 2012 documentary film directed by Alex Gibney. The film details the first known protest against clerical sex abuse in the United States by four deaf men. It features the voices of actors Jamey Sheridan, Chris Cooper, Ethan Hawke and John Slattery, who provide the vocal translation of the deaf interviewees.