The Railway Magazine is a monthly British railway magazine, aimed at the railway enthusiast market, that has been published in London since July 1897. As of 2010 [update] it was, for three years running, the railway magazine with the largest circulation in the United Kingdom, having a monthly average sale during 2009 of 34,715 [3] (the figure for 2007 being 34,661). [4] It was published by IPC Media until October 2010, with ISSN   0033-8923, and in 2007 won IPC's 'Magazine of the Year' award. Since November 2010, The Railway Magazine has been published by Mortons Media Group Ltd. (Mortons of Horncastle).

The Railway Magazine was launched by Joseph Lawrence and ex-railwayman Frank E. Cornwall of Railway Publishing Ltd, who thought there would be an amateur enthusiast market for some of the material they were then publishing in a railway staff magazine, the Railway Herald. They appointed as its first editor a former auctioneer, George Augustus Nokes (1867-1948), who wrote under the pseudonym "G. A. Sekon". He quickly built the magazine circulation to around 25,000. From the start it was produced in Linotype on good-quality paper and well illustrated with photographic halftone and occasional colour lithographic plates.

In 1910, following a dispute with the proprietors, Nokes resigned and started a rival, very similar, magazine, Railway and Travel Monthly. Both this and The Railway Magazine in 1916 were purchased by John Aiton Kay (1883-1949), proprietor of the Railway Gazette , and Nokes's title was renamed Transport and Travel Monthly in 1920 before being amalgamated with The Railway Magazine from January 1923. Apart from this episode, The Railway Magazine had no serious commercial rival in its field until the 1940s. Kay himself served as editor after his predecessor had left for service in World War II. For many years the magazine shared editorial direction with the Railway Gazette, and for periods had officially no editor of its own. From May 1942 to the end of 1949, paper shortages compelled bi-monthly publication; in January 1942 there had been a reduction of the page size by a half-inch in both dimensions down to 9 by 6 inches (23 by 15 centimetres) (which lasted until October 1963), though it continued to use art paper for a centre section of photographs, which had begun in January 1934. [5]

The magazine claims a record for the longest unbroken published series, begun under the title "British locomotive practice and performance" in 1901, characterised by detailed logs giving the timings of notable trips, recorded by observers with a stopwatch. [6] (The September 1930 column was 'pulled' by the editor as being too critical of Nigel Gresley's London and North Eastern Railway steam locomotives.) [7] Its first writer was the New Zealand-born Charles Rous-Marten (1844-1908). One of those who shared authorship of the series after his death was the Great Eastern Railway engineer Cecil J. Allen (1886-1973) who became sole author from 1911 until succeeded by O. S. Nock in 1958, when Cecil J. Allen moved his performance column to Trains Illustrated (later renamed Modern Railways ), edited by his son, G. Freeman Allen. From 1981 to 2004 the performance series was written by Peter W. B. Semmens (1927-2007), who also served as chief correspondent from 1990, notably reporting on the Channel Tunnel construction. [8] Authorship of the series, now called just "Practice & performance", has subsequently been shared by Keith Farr and John Heaton.

The editor originated a series of "Illustrated Interviews" with senior railway officials, the first being Joseph Wilkinson, general manager of the Great Western Railway; another early manager to feature was John Sylvester Hughes of the Festiniog Railway. [9] Other contributors of features in earlier days included Rev. W. J. Scott, Rev. Victor L. Whitechurch (1868-1933), Charles H. Grinling, railwayman H. L. Hopwood (1881-1927), and the much-travelled T. R. Perkins (1872-1952). Harold Fayle contributed on Irish railways (for many years it was traditional for the May issue to have a strong Irish content, with the January one having a Scottish slant). A notable series by the locomotive engineer E. L. Ahrons on "Locomotive and train working in the latter part of the nineteenth century" was published between 1915 and 1926 (and much later collected in book format). A very small amount of fiction was included in the magazine's earliest days. [10] Another feature which has persisted since the early days has been answers to readers' questions, under the title "The why & the wherefore".

Notable photographic contributors of the Interwar period included Maurice W. Earley (1900–82), W. Leslie Good, Frank R. Hebron (died 1980), F. E. Mackay, O. J. Morris (1902–61) (who produced the first colour photograph published in the magazine, in 1938) and H. Gordon Tidey. The cover design, incorporating a photograph, remained substantially unchanged from the early 1900s to the mid-1950s; colour was first introduced there in 1963. In common with most similar magazines, the pictorial content is today largely in colour.

In earliest days, current news paragraphs were placed at the back of the magazine under the headings "What the railways are doing" and "Pertinent paragraphs"; from 1987 news was moved to the front. The magazine has also over the years steadily extended its detailed coverage of locomotive and rolling stock movements. It now covers current British railway news, modern traction, some history, heritage railways and general and international railway topics.

Between November 1963 and December 1996, the definite article was omitted from the title, which was Railway Magazine during that period. Since November 1983, the word "Magazine" has been in smaller type.

The Railway Magazine has a presence on the National Preservation forums. Members and readers are able to talk and comment directly to members of the editorial staff, providing both feedback and constructive criticism. This has been noted as a valuable source of information for the magazine in order to keep in touch with its readership online in the internet age.

The Class A4 is a class of streamlined 4-6-2 steam locomotive designed by Nigel Gresley for the London and North Eastern Railway in 1935. Their streamlined design gave them high-speed capability as well as making them instantly recognisable, and one of the class, 4468 Mallard, holds the world record as the fastest steam locomotive. Thirty-five of the class were built to haul express passenger trains on the East Coast Main Line route from London Kings Cross via York to Newcastle, and later via Newcastle to Edinburgh, Scotland. They remained in service on the East Coast Main Line until the early 1960s when they were replaced by Deltic diesel locomotives; they themselves proving to be worthy successors to the A4s while most other diesel locomotives failed. Several A4s saw out their remaining days until 1966 in Scotland, particularly on the Aberdeen – Glasgow express trains, for which they were used to improve the timing from 3.5 to 3 hours.

The Great Bear, number 111, was a locomotive of the Great Western Railway. It was the first 4-6-2 (Pacific) locomotive used on a railway in Great Britain, and the only one of that type ever built by the GWR.

Direct Rail Services (DRS) is a rail freight company in Great Britain. It was created in 1994 by British Nuclear Fuels Ltd to take over British Rail's handling of nuclear material, and in 2005 transferred to the Nuclear Decommissioning Authority (NDA). It has since diversified into other freight operations and providing haulage for passenger services. DRS is one of five publicly owned railway companies in the United Kingdom, the others being NI Railways, LNER, Northern Trains and Transport for Wales.

The Selby rail crash was a high-speed train accident that occurred at Great Heck near Selby, North Yorkshire, England, on the morning of 28 February 2001. An InterCity 225 passenger train operated by Great North Eastern Railway (GNER) travelling from Newcastle to London collided with a Land Rover Defender which had crashed down a motorway embankment onto the railway line. It was consequently derailed into the path of an oncoming freight train at an estimated closing speed of 142 mph (229 km/h). Ten people died including the drivers of both trains, and 82 were seriously injured. It remains the worst rail disaster of the 21st century in the United Kingdom.

The Wensleydale Railway is a heritage railway in Wensleydale and Lower Swaledale in North Yorkshire, England. It was built in stages by different railway companies and originally extended to Garsdale railway station on the Settle-Carlisle line. Since 2003, the remaining line has been run as a heritage railway. The line runs 22 miles (35 km) between Northallerton West station, about a fifteen-minute walk from Northallerton station on the East Coast Main Line, and Redmire.

Lode Star is the only remaining GWR 4000 Class locomotive. It is preserved at the National Railway Museum in York, UK. 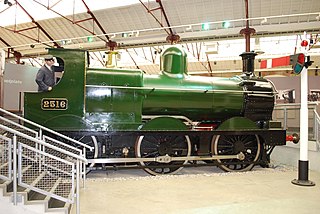 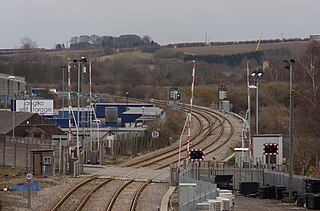 The Peterborough–Lincoln line is a railway line linking Peterborough and Lincoln Central, via Sleaford and Spalding. Between Lincoln and Spalding, the line follows the route of the former Great Northern and Great Eastern Joint Railway.

The Northallerton–Eaglescliffe line runs between the towns of Northallerton and Eaglescliffe. It connects the East Coast Main Line to the Tees Valley Line. It was built by the Leeds Northern Railway as part of their main line from Leeds to Stockton which opened on 2 June 1852, although the connection to the ECML at the Northallerton end was not opened for a further four years.

Nicholas Hugh Pigott was the editor of The Railway Magazine, Britain's best-selling rail title between 1994 and 2015. After stepping down, he took on the position as the magazine's Consultant Editor. He previously worked in Fleet Street as a journalist for the Daily Express.

George Augustus Nokes (1867–1948), often known by his pen-name G.A. Sekon, was the founding editor of The Railway Magazine.

Moor Road railway station is on the Middleton Railway in West Yorkshire, England.

Taw Valley Halt railway station is the current southern terminus of the Swindon and Cricklade Railway, a heritage railway line in Wiltshire, South-West England. The restored line was extended to the site of the halt in 2012, and the halt was opened in 2014. The halt is at the point where the new track diverges from the original route of the Midland and South Western Junction Railway. There is a short siding on the original trackbed. 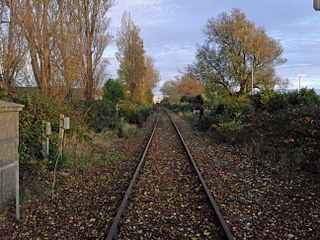 The Hamworthy Freight Branch is a short standard gauge line from Hamworthy Station to the Hamworthy side of Poole Harbour.

Mouldon Hill railway station is the proposed southern terminus of the Swindon and Cricklade Railway, a heritage railway line in England. The station will be situated opposite the River Ray which flows through and within Mouldon Hill Country Park.

Danby Wiske railway station was a station on the East Coast Main Line. It was located approximately 0.5 miles (0.8 km) east of Danby Wiske, in the Hambleton district of North Yorkshire. Opened on 1 December 1884 the station was closed to passengers on 15 September 1958.

Knottingley TMD was a Traction Maintenance Depot located in Knottingley, West Yorkshire, England. The depot was situated on the Pontefract Line and was near Knottingley station. It opened in 1967 to maintain the locomotives and hopper wagons for a planned 75 Merry-go-round trains a day, expected to use the Wakefield and Goole line.

Peter Johnson is a British railway historian and author who specialises in books and articles on narrow-gauge railways. He is particularly associated with the Ffestiniog Railway.

Joseph Charles Victor Mitchell was a dentist, inventor, and pioneer railway preservationist. He was the author or editor of, and publisher of, more than 600 books on railways in the United Kingdom and Europe.