Last updated January 07, 2020
This article is about the weekly DC newspaper. For the community newspapers in Upstate New York, see Spotlight Newspapers. For other uses, see spotlight (disambiguation).

The Spotlight was a weekly newspaper in the United States, published in Washington, D.C. from September 1975 to July 2001 by the now-defunct antisemitic Liberty Lobby. [1] The Spotlight ran articles and editorials professing a "populist and nationalist" political orientation. Some observers have described the publication as promoting a right-wing, or conservative, politics. [2]

The Spotlight has been described in media reports as promoting an America First position and giving positive coverage to the political campaigns of Pat Buchanan and David Duke. [3] The Spotlight gave frequent coverage to complementary and alternative medicine, including advertisements for the purported anti-cancer supplement Laetrile. [4] Kevin J. Flynn's book The Silent Brotherhood described The Spotlight as regularly featuring "articles on such topics as Bible analysis, taxes and fighting the IRS, bankers and how they bleed the middle class, and how the nation is manipulated by the dreaded Trilateral Commission and Council on Foreign Relations", adding "the paper attracted a huge diversity of readers". [5] NameBase described the newspaper as "anti-elitist, opposed the Gulf War, wanted the JFK assassination reinvestigated, and felt that corruption and conspiracies can be found in high places" [6]

The Spotlight was called "the most widely read publication on the fringe right" by the Anti-Defamation League, who also stated the newspaper "reflected Carto's conspiracy theory of history" and called the paper anti-Semitic. [2]

Howard J. Ruff in his 1979 book How to Prosper During the Coming Bad Years praised The Spotlight for its investigative reporting while criticizing it for a "blatantly biased" right-wing point of view and concluded "there are many things I detest about it, but I wouldn't be without it." [8]

U.S. Congressman and John Birch Society leader Larry McDonald criticized The Spotlight in the Congressional Record in 1981 for purported use of the Lyndon LaRouche movement as a source of news items. [9]

On August 14, 1978, The Spotlight published an article by Victor Marchetti linking former CIA agent and Watergate figure E. Howard Hunt to the assassination of John F. Kennedy. [10] Headlined "CIA to Nail Hunt for Kennedy Killing", the article said: "In the public hearings [of a pending Congressional hearing], the CIA will 'admit' that Hunt was involved in the conspiracy to kill Kennedy." [10] It also claimed that the United States House Select Committee on Assassinations had received an internal CIA memo from 1966 that stated the agency "will have to explain Hunt's presence in Dallas on November 22, 1963". [11]

Stating that he was libeled by the accusations, Hunt sued the Liberty Lobby for $3.5 million in damages in a federal court in Miami in 1981; Marchetti was not named as a defendant. [10] [11] Hunt, represented by attorney Ellis Rubin, said that he suffered a $27,000 drop in income after the article was published. [10] [11] He also said that he was in Washington, D.C., on the day that Kennedy was killed. [11] Miles McGrane, the attorney for Liberty Lobby stated that Liberty Lobby did not believe that Hunt was involved in the assassination, but that he was going to be made a scapegoat by the CIA. [10] On December 17, 1981, the jury found in Hunt's favor and awarded him $650,000 in damages. [10] The decision was later overturned due to an error in jury instructions. [12]

In the second trial, Hunt was represented by Baltimore attorney William Snyder. [12] Hunt testified that he was in Washington, D.C., with his wife and son when he first heard of the assassination. [12] Snyder told the jury that Hunt had already been cleared in the assassination by various commissions and inquiries. [12] Attorney Mark Lane, author of Rush to Judgment and a leading proponent of the theory that the CIA was responsible for the assassination of Kennedy, represented Liberty Lobby. [12] Lane successfully defended Liberty Lobby against the defamation charges, [13] which became the basis for Lane's book Plausible Denial .

Lawsuit by the National Review

In 1985, the National Review and its editor, William F. Buckley Jr., were represented by attorney J. Daniel Mahoney during their $16 million libel suit against The Spotlight. [14]

After the Oklahoma City bombing it was reported that Timothy McVeigh had taken out a classified advertisement in The Spotlight in August 1993 under the name "T. Tuttle" [15] and had used a telephone card purchased from the newspaper. [16]

The Spotlight ceased publication in 2001 after Liberty Lobby was forced into bankruptcy as a result of a lawsuit brought by former associates in the Institute for Historical Review. [17] Willis Carto and other people involved in The Spotlight then started a new newspaper, the American Free Press , which is very similar in overall tone. An August 2, 2002 court order in the Superior Court of California transferred the assets of Liberty Lobby, including The Spotlight, to the judgment creditor, the Legion for the Survival of Freedom, Inc. [18] who maintains an online archive of Spotlight articles from 1997 to 2001. [19]

From 1988 to 2001, the paper sponsored the Radio Free America talk show which was heard on WWCR shortwave and on AM talk radio outlets.[ citation needed ]

The Institute for Historical Review (IHR), founded in 1978, is an organization based in California, United States, best known for publishing articles and books promoting Holocaust denial. It is considered by many scholars to be central to the international Holocaust denial movement. IHR promotes antisemitic viewpoints, and has links to neo-Nazi organizations. The Institute published the Journal of Historical Review until 2002, but now disseminates its materials through its website and via email. The Institute is affiliated with the Legion for the Survival of Freedom and Noontide Press.

Frank Anthony Sturgis, born Frank Angelo Fiorini, was one of the five Watergate burglars whose capture led to the end of the presidency of Richard Nixon. He served in several branches of the United States military and in the Cuban Revolution of 1958, and worked as an undercover operative for the Central Intelligence Agency. He was named as one of the men who along with Miami CIA head David Morales, met with E. Howard Hunt, shortly before the assassination of John F. Kennedy. 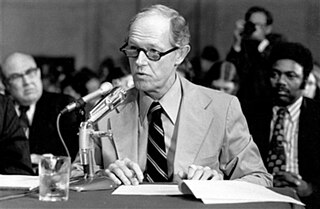 Everette Howard Hunt Jr., better known as E. Howard Hunt, was an American intelligence officer and published author of 73 books. From 1949 to 1970, Hunt served as an officer in the Central Intelligence Agency (CIA). Along with G. Gordon Liddy, Frank Sturgis, and others, Hunt was one of the Nixon administration "plumbers," a team of operatives charged with identifying government sources of national security information "leaks" to outside parties. Hunt and Liddy plotted the Watergate burglaries and other clandestine operations for the Nixon administration. In the ensuing Watergate scandal, Hunt was convicted of burglary, conspiracy, and wiretapping, eventually serving 33 months in prison.

Liberty Lobby was a United States political advocacy organization founded in 1958. It was created by Willis Carto and described itself as "a pressure group for patriotism; the only lobby in Washington, D.C., registered with Congress which is wholly dedicated to the advancement of government policies based on our Constitution and conservative principles." Carto is noted for his promotion of antisemitic conspiracy theories and Holocaust denial.

Willis Allison Carto was an American political activist on the American far right. He described himself as Jeffersonian and populist, but was primarily known for his promotion of antisemitic conspiracy theories and Holocaust denial.

The American Free Press is a weekly newspaper published in the United States.

The Barnes Review is a bi-monthly magazine founded in 1994 by Willis Carto's Liberty Lobby and headquartered in Washington, D.C. The Southern Poverty Law Center notes it to be one of the most virulent anti-Semitic organizations around, whose journal and website were "dedicated to historical revisionism and Holocaust denial."

Revilo Pendleton Oliver was an American professor of Classical philology, Spanish, and Italian at the University of Illinois at Urbana-Champaign. After World War II, he published in American Opinion, becoming known as a polemicist for white supremacist and right-wing causes. 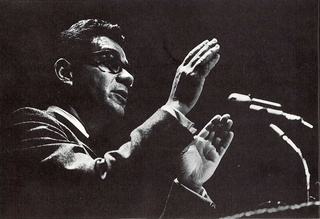 Mark Lane was an American attorney, New York state legislator, civil rights activist, and Vietnam war-crimes investigator. He is best known as a leading researcher, author, and conspiracy theorist on the assassination of U.S. President John F. Kennedy. From his 1966 number-one bestselling critique of the Warren Commission, Rush to Judgment, to Last Word: My Indictment of the CIA in the Murder of JFK, published in 2011, Lane wrote at least four major works on the JFK assassination and no fewer than ten books overall.

David Atlee Phillips was a Central Intelligence Agency officer of 25 years and a recipient of the Career Intelligence Medal. Phillips rose to become the CIA's chief of operations for the Western hemisphere. In 1975 he founded the Association of Former Intelligence Officers (AFIO), an alumni association comprising intelligence officers from all services.

Austin Joseph App was a German-American professor of medieval English literature who taught at the University of Scranton and La Salle University. App defended Germans and Nazi Germany during World War II. He is known for his work denying the Holocaust, and he has been called the first major American Holocaust denier.

On March 1, 1967, New Orleans District Attorney Jim Garrison arrested and charged New Orleans businessman Clay Shaw with conspiring to assassinate President Kennedy, with the help of Lee Harvey Oswald, David Ferrie, and others. On January 29, 1969, Shaw was brought to trial in Orleans Parish Criminal Court on these charges. On March 1, 1969, a jury took less than an hour to find Shaw not guilty. To date, it is the only trial to be brought for the assassination of President Kennedy.

Ilona Marita Lorenz was a German-born American woman who had an affair with Fidel Castro in 1959 and in January 1960 was involved in an assassination attempt by the CIA on Castro's life.

Plausible Denial: Was the CIA Involved in the Assassination of JFK? is a 1991 book by American attorney, Mark Lane that outlines his theory that former Watergate figure E. Howard Hunt was involved with the Central Intelligence Agency in the assassination of United States President John F. Kennedy. Published by Thunder's Mouth Press, the book chronicles Lane's legal defense of Liberty Lobby, a right-wing political group that was sued for libel by Hunt after it published an article in its weekly paper, The Spotlight, linking Hunt — a former CIA operative — to the assassination.

The CIA Kennedy assassination theory is a prominent John F. Kennedy assassination conspiracy theory. According to ABC News, the Central Intelligence Agency (CIA) is represented in nearly every theory that involves American conspirators. The secretive nature of the CIA, and the conjecture surrounding high-profile political assassinations in the United States during the 1960s, has made the CIA a plausible suspect for some who believe in a conspiracy. Conspiracy theorists have ascribed various motives for CIA involvement in the assassination of President Kennedy, including Kennedy's firing of CIA director Allen Dulles, his refusal to provide air support to the Bay of Pigs invasion, his plan to cut the agency's budget by 20 percent, and the belief that the president was weak on Communism. 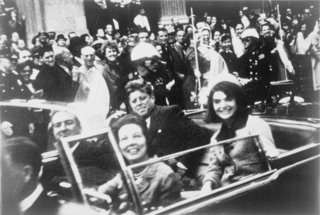 The assassination of John F. Kennedy on November 22, 1963 and the subsequent murder of prime suspect Lee Harvey Oswald by night club owner Jack Ruby has spurred numerous conspiracy theories. These include alleged involvement of the CIA, the Mafia, Vice President Lyndon B. Johnson, Cuban Prime Minister Fidel Castro, the KGB, or some combination of these entities. The original FBI investigation and Warren Commission report, as well as an alleged "benign CIA cover-up", have led to the claim that the federal government deliberately covered up crucial information in the aftermath of the assassination. Former Los Angeles District Attorney Vincent Bugliosi estimated that a total of 42 groups, 82 assassins, and 214 people had been accused at one time or another in various conspiracy scenarios. 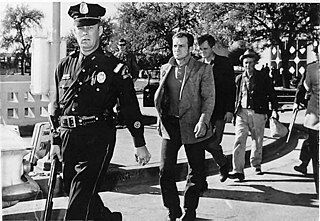 The three tramps are three men photographed by several Dallas-area newspapers under police escort near the Texas School Book Depository shortly after the assassination of United States President John F. Kennedy on November 22, 1963. Since the mid-1960s, various allegations have been made about the identities of the men and their involvement in a conspiracy to kill Kennedy.