Thomas Rotherham College is a college for 16- to 19-year-olds, founded in 1967, in Rotherham, South Yorkshire, England.

The college has its origins in Rotherham Grammar School (founded 1483), whose buildings it took over. In the 1960s, the grammar school had around 600 boys and was administered by the County Borough of Rotherham Education Committee.

The Thomas Rotherham College took its name from the fifteenth-century prelate and statesman Thomas Rotherham, the original founder of the grammar school. Thomas Rotherham was archbishop of York from 1480 until his death in 1500. He was at various times an ambassador, and keeper of the Privy Seal. Twice, he was Lord Chancellor of England.

Along with all other colleges, TRC was incorporated and left local authority control on 1 April 1993. Incorporated status for the college lasted from then until 2017.

Thomas Rotherham College converted from being a sixth form college to a 16–19 academy, within the Inspire Trust, on 1 November 2017. A new logo – similar in style to other establishments in the trust, while retaining aspects from the college's (and grammar school's) old logo – was introduced in September 2019. In the initial stages, no new principal was appointed to replace Dr Richard Williams. [1] Dr Stephan Jungnitz, previously of Hartlepool College, was then appointed. [2] By summer 2018 Thomas Rotherham had its first female headteacher, Shirley-Ann Brookes-Mills. [3] She left after six months in the post. [4] [5] Eventually it was decided to continue long-term without a principal.[ citation needed ]

The main building of what is now the Thomas Rotherham College is a Grade II Listed building. It was built as a theological college training ministers for Congregational churches. The site (originally 8.5 acres) had been bought in 1870, for £3,200. [6] But, the building project was delayed owing to the commercial upheaval arising from the outbreak of the Franco-Prussian war. [6] The foundation stone was eventually laid on 23 April 1874. The building was executed in "collegiate Gothic" at a cost of £23,000, and it was opened on 20 September 1876. [6]

The building was designed by William Gillbee Habershon and Alfred Robert Pite. [7] Their architectural practice was in London. However, WG Habershon was from the Habershon family of Rotherham. The Habershons were a Congregational family. WG's grandfather and two of his uncles were the founders of the Habershons steel rolling mills (JJ Habershon & Sons). WG's first-cousin Alderman John Matthew Habershon was the first mayor of Rotherham (1871 and 1872). John Matthew's grandson was mayor in 1922. WG's father (also an architect) had designed the Kimberworth Parish Church. WG's younger brother was the architect Matthew Edward Habershon.

Like all colleges, Thomas Rotherham College underwent two Further Education Funding Council inspections in the 1990s. Since the inspection of colleges was transferred to Ofsted in 2001, the college has undergone six further inspections:

Huddersfield New College is a former grammar school and current sixth form college located in Salendine Nook on the outskirts of Huddersfield, in the county of West Yorkshire, England. The current Principal is Angela Williams. On 17 May 2016 the college was assessed as 'Outstanding' in all 6 inspection domains following an OFSTED review. They are the first Sixth Form College to receive such an accolade under the new inspection framework.

Milton Keynes College is a general further education and training college, serving the Borough of Milton Keynes. It also serves the surrounding areas. It also provides tertiary education to Foundation Degree level. Its degree-level courses are validated by the Open University and the University of Bedfordshire.

Oakwood High School is a coeducational secondary school with academy status in Rotherham, South Yorkshire, England, which in 2020 had 1,354 students.

Exmouth Community College is an academy in Exmouth, Devon, England. The college provides secondary education for 2000 plus students aged 11 to 18. The principal is Andrew Davis.

Aston Academy is a secondary school with academy status at Swallownest in the Metropolitan Borough of Rotherham, South Yorkshire, England. 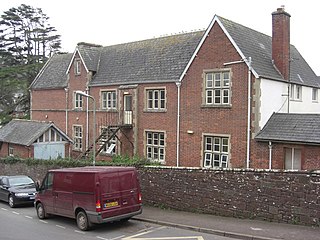 Queen Elizabeth's School is an academy school, with a sixth-form, in Crediton, Devon. It has 1300 students. It was formed as a comprehensive school in the early 1970s by a merger of The Shelley Secondary Modern with the Queen Elizabeth's Grammar School.

Maltby Academy is an academy school in the mining town of Maltby in South Yorkshire, England.

Malton School is an 11-18 mixed comprehensive school of some 800 pupils (2021), serving the market town of Malton and the surrounding area in Ryedale, North Yorkshire, England.

Clifton Community School is a secondary school located in Rotherham, South Yorkshire, England. It is situated on Middle Lane and receives children from a number of primary schools throughout Rotherham.