The school was founded as a secondary modern school in the 1950s, [1] with its own buildings being opened in 1956. [2] It later became a comprehensive school.

The school was awarded specialist sports college status in 2008, [3] changing its name from Thrybergh Comprehensive School to Thrybergh School and Sports College.

The school converted to academy status in October 2013 and was renamed Thrybergh Academy and Sports College. On 1 May 2014, it formally merged with the local Dalton Foljambe Primary School to become Rotherham's only all-through school, catering for ages 3–16. The school gained new building through a PFI contract connected to the change of status, [4] and has had difficulty servicing the repayments. [5]

In January 2019 he school was rated 'Inadequate' by Ofsted and was placed into special measures. [6] In May 2019 the school received a financial warning from the Education and Skills Funding Agency after the school made a significant financial loss in the previous year. [7] At the end of 2019 the school closed its sport facilities to members of the local community, despite opposition. [3]

Since the commencement of Ofsted inspections in September 1993, the school has undergone nine inspections: 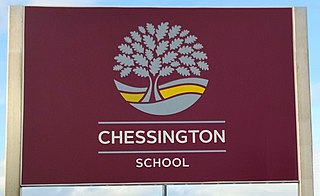 Chessington School is a co-educational secondary school with a sports centre, in the Royal Borough of Kingston upon Thames, Greater London. The current building was opened in September 2009.

Aston Academy is a secondary school with academy status at Swallownest in the Metropolitan Borough of Rotherham, South Yorkshire, England.

The Cotswold School is an 11 to 18 academy school located in Bourton-on-the-Water, Gloucestershire, Great Britain. The school achieved academy status in September 2010. The principal from 2012 is Mr Will Morgan. The school roll in 2016 sits at 1320.

St Thomas More Catholic School and Sixth Form College is a mixed Roman Catholic secondary school located on Greenmoor Road, Nuneaton, Warwickshire, England. It is listed as a specialist Technology school by Ofsted, which requires the school to offer GCSEs in Technology to all students. The principal is Mrs Leearna Thomas who has been in the position since the beginning of 2018 after taking over from Mr Francis Hickey. As of September 2012, the educational establishment has been rated as 'good' ' by Ofsted, who previously gave it an 'outstanding'.

Woodchurch High School is a non-selective co-educational secondary school with academy status for 11- to 16-year-olds. It is located at Woodchurch, on the Wirral Peninsula, England. The school holds Specialist Engineering College status, and has facilities for students with physical and learning disabilities.

St Bernard's Catholic High School is a coeducational Catholic secondary school with academy status in Rotherham, South Yorkshire, England. Its official opening date was 26 October 1961 at 3 pm. The school motto is "I have come so that they may have life, and have it to the full". The school prayer is the Memorare of Saint Bernard. The school was originally a 'Specialist School for the Arts', but now it has a specialism in 'Applied Learning' too. St. Bernard's allows students to study various qualifications, such as GCSEs, BTECs and Functional Skills, with most qualifications being equivalent to Level 2.

Wingfield Academy is a coeducational secondary school with academy status, located in the Wingfield area of Rotherham, South Yorkshire, England. It has been renamed three times since it opened. It was originally named Wingfield Comprehensive School until September 2006 when it became simply Wingfield School. In September 2008, it became a specialist school and was rebranded as Wingfield Business & Enterprise College. The third rename occurred in August 2013 when the college completed its transition to an academy becoming Wingfield Academy. On 1 December 2020 Wingfield Academy become part of the New Collaborative Learning Trust.

Wickersley School and Sports College is a coeducational secondary school and sixth form with academy status, located in Wickersley in the Metropolitan Borough of Rotherham, South Yorkshire, England.

Maltby Academy is an academy school in the former mining town of Maltby in South Yorkshire, England. 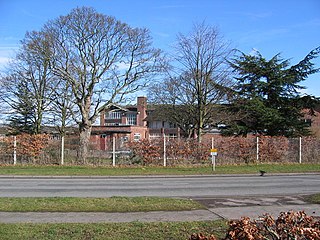 The Howard School is a boys' secondary school in Rainham, Kent, England, with approximately 1,500 pupils. It offers a partially selective system and is one of only five bi-lateral schools in the United Kingdom. The partially selective system permits admission to the grammar school section by the 11-Plus selection, however a passing mark is not required if the pupil is seen to have the ability to work in the 'grammar stream', and non-selective admission to the high school. The school is a Sports College.

Clifton Community School is a secondary school located in Rotherham, South Yorkshire, England. It is situated on Middle Lane and receives children from a number of primary schools throughout Rotherham.

Fowey River Academy is a co-educational secondary school with academy status, serving a large and diverse catchment area including Fowey the nearby towns of St Blazey and Lostwithiel and surrounding villages. The school currently has a 'Requires Improvement' Ofsted Rating. The school was also featured in a ‘damning’ BBC Panorama documentary, that looked into the way two academy trusts had spent millions of pounds. Serious questions were raised about how money was spent on improvements, as well as claims that school governors were denied financial reports and that there was a lack of local scrutiny over the way the school was run. Fowey River Academy was reportedly charged at least £300,000 for LED lighting that its chairman of governors said was not installed.