Thomas Savage (1608 –14 February 1682) was a soldier and merchant in colonial New England who attained the rank of major during King Philip's War.

Born in Taunton,Somerset,he was son of William Savage,a blacksmith. Thomas was apprenticed to the Merchant Taylors Company of London on 9 January 1621.

He immigrants to Massachusetts with Sir Henry Vane aboard the Planter in 1635. He was admitted a freeman of Boston in 1636. The next year he took the side of his mother-in-law,Anne Hutchinson,in the controversy that her teaching excited. He was compelled in consequence to leave the colony,and with William Coddington he and many others founded the settlement of Rhode Island in 1638. Savage was a signer of the Portsmouth Compact. After living there for some time he was permitted to return to Boston.

Savage served in the colonial militia during King Philip's War,and transported captured Native Americans into Boston for the purpose of being sold into slavery in Europe. [3]

On 12 March 1654 he and Captain Thomas Clarke were chosen to represent Boston at the general court,of which he continued a member. He was elected speaker of the assembly in 1637,1660,1671,1677,and 1678. After representing Boston for eight years,he became deputy for Hingham in 1663. In 1664 he,with many other leading citizens,dissented from the policy of the colony in refusing to recognise four commissioners sent by King Charles II to regulate its affairs,and in 1666 he and his friends embodied their views in a petition.

In 1671 he was chosen deputy for Andover,and in 1675 commanded the forces of the state in the first expedition against Metacomet. In 1680 he was commissioned,with others,by the Crown to administer an oath to Sir John Leverett the governor,pledging him to execute the oath required by the act of trade. In 1680 he was elected "assistant" or magistrate,and retained the office until his death on 14 February 1682. [1]

Upon his death his estate had a net value of over 2,500 pounds.

Savage was twice married;first,in 1637,to Faith,daughter of William and Anne Hutchinson. By her he had three sons and two daughters. She died on 20 February 1652. On 15 September he married Mary,daughter of the Rev. Zechariah Symmes of Charlestown,by whom he had eight sons and three daughters. She survived him,and afterwards married Anthony Stoddard. 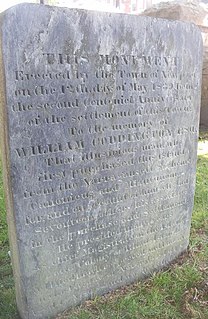 William Coddington was an early magistrate of the Massachusetts Bay Colony and later of the Colony of Rhode Island and Providence Plantations. He served as the judge of Portsmouth and Newport,governor of Portsmouth and Newport,deputy governor of the four-town colony,and then governor of the entire colony. Coddington was born and raised in Lincolnshire,England. He accompanied the Winthrop Fleet on its voyage to New England in 1630,becoming an early leader in Boston. There he built the first brick house and became heavily involved in the local government as an assistant magistrate,treasurer,and deputy.

William Hutchinson (1586–1641) was a judge in the Colonial era settlement at Portsmouth on the island of Aquidneck. Aquidneck Island was known at the time as Rhode Island,and it later became part of the Colony of Rhode Island and Providence Plantations.

Nicholas Easton (c.1593–1675) was an early colonial President and Governor of Rhode Island. Born in Hampshire,England,he lived in the towns of Lymington and Romsey before immigrating to New England with his two sons in 1634. Once in the New World,he lived in the Massachusetts Bay Colony towns of Ipswich,Newbury,and Hampton. Easton supported the dissident ministers John Wheelwright and Anne Hutchinson during the Antinomian Controversy,and was disarmed in 1637,and then banished from the Massachusetts colony the following year. Along with many other Hutchinson supporters,he settled in Portsmouth on Aquidneck Island,later a part of the Colony of Rhode Island and Providence Plantations. He was in Portsmouth for about a year when he and eight others signed an agreement to create a plantation elsewhere on the island,establishing the town of Newport.

John Sanford was an early settler of Boston,Massachusetts,an original settler of Portsmouth,Rhode Island,and a governor of the combined towns of Portsmouth and Newport in the Rhode Island colony,dying in office after serving for less than a full term. He had some military experience in England,and also was an employee of Massachusetts magistrate John Winthrop's household prior to sailing to New England in 1631 with Winthrop's wife and oldest son. He lived in Boston for six years and was the cannoneer there.

Obadiah Holmes was an early Rhode Island settler,and a Baptist minister who was whipped in the Massachusetts Bay Colony for his religious beliefs and activism. He became the pastor of the Baptist Church in Newport,Rhode Island,a position he held for 30 years.

William Brenton was a colonial President,Deputy Governor,and Governor of the Colony of Rhode Island and Providence Plantations,and an early settler of Portsmouth and Newport in the Rhode Island colony. Austin and other historians give his place of origin as Hammersmith in Middlesex,England,but in reviewing the evidence,Anderson concludes that his place of origin is unknown. Brenton named one of his Newport properties "Hammersmith," and this has led some writers to assume that the like-named town in London was his place of origin.

Henry Bull (1610–1694) was an early colonial Governor of Rhode Island,serving for two separate terms,one before and one after the tenure of Edmund Andros under the Dominion of New England. Sailing from England as a young man,Bull first settled in Roxbury in the Massachusetts Bay Colony,but soon became a follower of the dissident ministers John Wheelwright and Anne Hutchinson,and was excommunicated from the Roxbury church. With many other followers of Hutchinson,he signed the Portsmouth Compact,and settled on Aquidneck Island in the Narragansett Bay. Within a year of arriving there,he and others followed William Coddington to the south end of the island where they established the town of Newport.

Edward Hutchinson (1613–1675) was the oldest child of Massachusetts and Rhode Island magistrate William Hutchinson and his wife,the dissident minister Anne Hutchinson. He is noted for making peace with the authorities following his mother's banishment from Massachusetts during the Antinomian Controversy,returning to Boston,and ultimately dying in the service of the colony that had treated his family so harshly.

William Parker (1618–1686) was an early Puritan settler in the Connecticut Colony and one of the founders of Hartford. He arrived in the Massachusetts Bay Colony in the summer of 1635 after sailing from London on May 21,1635 aboard the ship Mathew. He settled in Newtowne,the community that is now Cambridge,and became one of the members of Thomas Hooker's congregation. He was one of the founders of Hartford,Connecticut.

Peleg Sanford was an early governor of the Colony of Rhode Island and Providence Plantations,serving three consecutive terms from 1680 to 1683.

Samuel Wilbore was one of the founding settlers of Portsmouth in the Colony of Rhode Island and Providence Plantations. He emigrated from Essex,England to Boston with his wife and three sons in 1633. He and his wife both joined the Boston church,but a theological controversy began to cause dissension in the church and community in 1636,and Wilbore aligned himself with John Wheelwright and Anne Hutchinson,signing a petition in support of dissident minister Wheelwright. In so doing,he and many others were disarmed and dismissed from the Boston church. In March 1638,he was one of 23 individuals who signed a compact to establish a new government,and this group purchased Aquidneck Island,then known as "Rhode Island",from the Narragansett Indians at the urging of Roger Williams,establishing the settlement of Portsmouth.

John Porter was an early colonist in New England and a signer of the Portsmouth Compact,establishing the first government in what became the Colony of Rhode Island and Providence Plantations. He joined the Roxbury church with his wife Margaret in 1633,but few other records are found of him while in the Massachusetts Bay Colony until he became involved with John Wheelwright and Anne Hutchinson during what is known as the Antinomian Controversy. He and many others were disarmed for signing a petition in support of Wheelwright and were compelled to leave the colony. Porter joined a group of more than 20 men in signing the Portsmouth Compact for a new government,and they settled on Rhode Island where they established the town of Portsmouth. Here Porter became very active in civic affairs,serving on numerous committees over a period of two decades and being elected for several terms as Assistant,Selectman,and Commissioner. He was named in Rhode Island's Royal Charter of 1663 as one of the ten Assistants to the Governor.

John Whipple was an early settler of Dorchester in the Massachusetts Bay Colony,who later settled in Providence in the Colony of Rhode Island and Providence Plantations,where the family became well established.

General James Cudworth was one of the most important men in Plymouth Colony. He served as Deputy to the Plymouth General Court (1649),Commander of militia in King Philip's War (1675–8),Assistant Governor and Deputy Governor (1681–2) of Plymouth Colony,and Commissioner to the New England Confederation.

Edward Hutchinson was a mercer and a resident of Lincolnshire,England,most noted for the careers of his children in New England. While his father and several of his uncles and brothers became prominent as clergymen,aldermen,sheriffs,and mayors in the city of Lincoln,Edward focused his efforts on his business after moving to the town of Alford. Remarkably,not a single record for him has been found in Alford,other than his burial and the baptisms of his 11 children,but he likely gained a considerable estate,and his children married into prominent families. What was most exceptional about Edward Hutchinson occurred following his 1632 death. Beginning in 1634,five of his nine surviving children and his widow immigrated to New England,and all six of them were exiled from the Massachusetts Bay Colony as a result of the events of the Antinomian Controversy from 1636 to 1638. From Boston two of his children went south and became founding settlers of the Colony of Rhode Island and Providence Plantations,and three of them,with his widow,went north to establish Exeter in the Province of New Hampshire,and then proceeded to Wells,Maine. Because of their involvement in the controversy,his children had a disproportionately large role in the establishment of these new settlements in New England.

William Baulston (c.1605—c.1678) was a colonial New England innkeeper,who was very active in the civil and military affairs of both the Massachusetts Bay Colony and the Colony of Rhode Island and Providence Plantations. He was a founding settler of Portsmouth,Rhode Island,was continuously elected to the highest positions in the colony,and was one of the ten Assistants named in the Rhode Island Royal Charter.

Daniel Denison was an early settler and political and military leader of the Massachusetts Bay Colony.