Thomas Sutton House, also known as the House on Game Preserve, is a historic home located at Woodland Beach, Kent County, Delaware. It was built about 1733, and is a two-story stuccoed brick house, constructed on a single pile, hall and parlor plan. It has a lower two-story wing that extends the axis of the main house. It serves as a residence and office for the personnel of the Woodland Beach Wildlife Area. [2]

It was listed on the National Register of Historic Places in 1973. [1]

Wave Hill is a 28-acre (11 ha) estate in the Hudson Hill section of Riverdale in the Bronx, New York City. Wave Hill currently consists of public horticultural gardens and a cultural center, all situated on the slopes overlooking the Hudson River, with expansive views across the river to the New Jersey Palisades. The estate includes two houses and a botanical garden. The oldest part of the main house, Wave Hill House, dates back to 1843; Glyndor House dates from 1927 and contains a multi-room art gallery. Perkins Visitor Center, which was originally a garage, contains a gift shop and an information desk.

The Brelsford House was a historic home in Palm Beach, Florida, United States, located at 1 Lake Trail. Built between 1888 and 1903, it was added to the National Register of Historic Places on May 3, 1974. The Neoclassical house was destroyed in August of the following year, but it remains on the Register.

The William Brown House, also known as London Town Publik House or Londontowne Public House, is a former Colonial tavern located in the Historic London Town and Gardens museum complex in Woodland Beach, Anne Arundel County, Maryland. Completed in 1764, it is one of the best-preserved examples of a colonial-era brick tavern house. From 1828 to 1965 the structure was used as a county alms house. It was declared a National Historic Landmark in 1970.

The Freegrace Marble Farm Historic District encompasses a historic farmstead in Sutton, Massachusetts. Although most of its buildings date to the 19th century, the farm has retained the form of a typical 18th-century farm, including a substantial portion of the land granted in 1717 to Freegrace Marble, one of Sutton's earliest colonial settlers. The property was listed on the National Register of Historic Places in 1989. 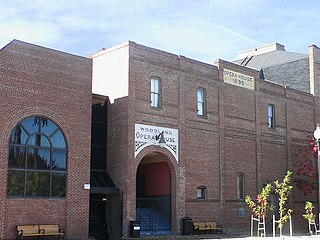 The Woodland Opera House, listed on the National Register of Historic Places and a California Historical Landmark, is one of four fully functioning 19th century opera houses in California. It is a contributing property to the Downtown Historic District of Woodland, California.

Retreat is a historic home located at Port Tobacco, Charles County, Maryland, United States. It is a one-story, clapboard-sheathed, frame house with a double chimney. The principal part of the house was built about 1770. Also located on the property is a frame, pyramid-roofed meathouse, dating from the early 19th century, and moved here from another historic property in the county known as "Brentland" in 1953. The home, approached by a private gravel road, is surrounded by cultivated fields, meadows, and woodland, preserving its original agricultural and rural setting. The house is one of the earliest known examples of the side-passage, two-room dwelling in Charles County. It is associated with Daniel of St. Thomas Jenifer and Daniel Jenifer. 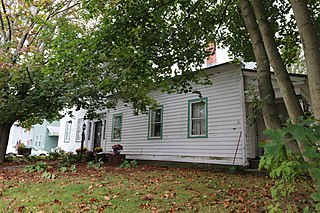 Sutton-Chapman-Howland House is a historic home located at Newark Valley in Tioga County, New York. The frame house was constructed in the 1830s in the Federal style. It consists of a two-story front gabled main block, a side gabled one story wing, and a gabled woodshed wing.

Sutton House may refer to:

Woodland Beach Wildlife Area is a state wildlife area located in Kent County, Delaware, along shore of the Delaware Bay. It is 6,320 acres (2,558 ha) in size and is managed by Delaware Department of Natural Resources and Environmental Control (DNREC), Division of Fish & Wildlife.

Sutton-Ditz House is a historic home and museum located in Clarion, Clarion County, Pennsylvania. It was built in 1847, and remodeled in 1909-1910. 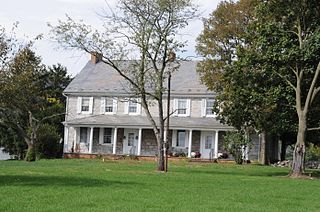 Woodland is a historic home and farm located at St. Thomas Township in Franklin County, Pennsylvania. The original section was built about 1760, and is a ​2 1⁄2-story, three-bay by two-bay, fieldstone dwelling with a gable roof. A three-bay by two-bay limestone section was added in 1790, and a ​2 1⁄2-story rear wing was added in 1907. A two-story porch was added to the 1790 section after 1910. Also on the property is a contributing spring house. 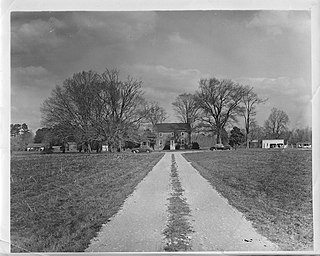 This is a list of the National Register of Historic Places listings in Sutton County, Texas. 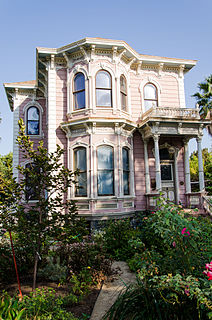 The R. H. Beamer House, also known as the Beamer-Schell House, is a historic house located at 19 3rd St. in Woodland, California. Built in 1904, the house was designed in the Italianate style, of which it has been called "an outstanding example". The house's design features a hipped roof with two chimneys, wide eaves, and a denticulated cornice with many brackets. The front entrance is a portico supported by Corinthian columns and pilasters and topped by a balustrade. The front of the house features a two-story bay with three windows on each story; the south side of the house has a similar bay.

Lacey-Keosauqua State Park is located southwest of Keosauqua, Iowa, United States. The park located along the Des Moines River in Van Buren County, it was dedicated in 1921. It is the largest state park in size in Iowa. In 1990 three areas were named nationally recognized historic districts and listed on the National Register of Historic Places.

The Warner P. Sutton House, also known as The Beeches or Beechwood Manor, is a private house located at 736 Pleasant Street in Saugatuck, Michigan. It was listed on the National Register of Historic Places in 1992. It now operates as the Beechwood Manor Inn Bed & Breakfast.

The Henshie-Briggs Row House is a historic building located in Des Moines, Iowa, United States. While the row house was a popular building form in the 19th century in the city, there are very few examples that remain. The two-story, brick, Italianate structure was completed in 1883. The single-family dwelling features brick load-bearing walls, a flat roof, and a wooden cornice. The house was listed on the National Register of Historic Places in 2001. It was moved to its current location on Woodland Avenue in 2008.