Thomas VanMetre or Vanmetre House is a historic home located near Martinsburg, Berkeley County, West Virginia, USA. It was built in 1838 and is a two-story, five bay, red brick vernacular "I"-house. It has a side gable roof and a single bay, pedimented portico supported by Doric order columns. Also on the property is summer kitchen (c. 1838). [2]

It was listed on the National Register of Historic Places in 2010. [1]

The Peter G. Van Winkle House was a historic home located in the Julia-Ann Square Historic District in Parkersburg, Wood County, West Virginia. It was built between about 1880 and 1899, and was a two-story duplex in the Queen Anne style. It featured a deck hipped roof with intersecting gables, turrets, and dormers. It was built on property once owned by former United States Senator Peter G. Van Winkle, who died in 1872.

Barboursville is the ruin of the mansion of James Barbour, located in Barboursville, Virginia. He was the former U.S. Senator, U.S. Secretary of War, and Virginia Governor. It is now within the property of Barboursville Vineyards. The house was designed by Thomas Jefferson, president of the United States and Barbour's friend and political ally. The ruin is listed on the National Register of Historic Places.

The John VanMetre House is a log and brick Federal-style house built in Kearneysville, Berkeley County, West Virginia around 1780, and enlarged with a log ell about 1800. Also on the property is a log smoke house, timber frame barn, and two sheds.

Huntley, also known as Historic Huntley or Huntley Hall is an early 19th-century Federal-style villa and farm in the Hybla Valley area of Fairfax County, Virginia. The house sits on a hill overlooking Huntley Meadows Park to the south. The estate is best known as the country residence of Thomson Francis Mason, grandson of George Mason of nearby Gunston Hall. It is listed on the National Register of Historic Places (NRHP), the Virginia Landmarks Register (VLR), and the Fairfax County Inventory of Historic Sites. 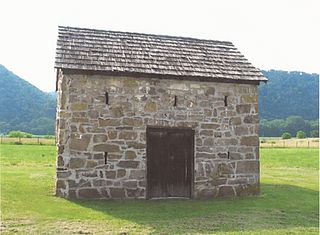 Fort Van Meter — or Fort VanMeter — is a mid-18th century frontier fort in the South Branch Potomac River Valley about 9 miles (14 km) southwest of Romney in Hampshire County, West Virginia, USA. It is located 15 miles (24 km) northeast of Moorefield and about a mile northeast of the former community of Glebe at the northern end of the rugged river gorge known as The Trough. 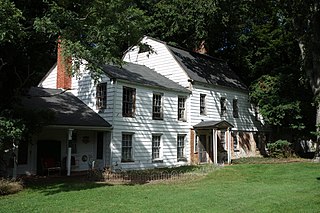 Tuthill-Lapham House, also known as Friendly Hall, is a historic home located at Wading River in Suffolk County, New York. The oldest section is a Federal style three story building with a gambrel roof, built around 1820. Attached is an addition from 1838 and a two-story addition to the west dated 1869. A kitchen wing was added in the 1920s.

The Thomas and Isabella Moore Clyde House is a private house located at 50325 Cherry Hill Road in Canton Township, Michigan. It was listed on the National Register of Historic Places in 2003.

Nathan VanMetre House is a historic home located near Martinsburg, Berkeley County, West Virginia. It was built in 1872, and is a two-story, eight bay wide rectangular brick house with a steeply pitched gable roof, in the Greek Revival style. The main section of the house is five bays wide. Also on the property is a small brick smokehouse (1872), large bank barn (1872), garage, two silos, and chicken house.

Van Metre Ford Stone Bridge is a historic stone arch bridge located near Martinsburg, Berkeley County, West Virginia. Built by Pennsylvania builder Silas Harry, it was built in 1832, and is a three span bridge crossing Opequon Creek. It is 132 feet long and constructed of ashlar limestone. The center span measures 32 feet and the two side spans are each 29.5 feet long.

Herman August Meyer House is a historic home located at Davis, Tucker County, West Virginia. It was built about 1891, and is a 2+1⁄2-story, "T"-shaped, 5-bay central-passage I house of wood construction. It was built as a single-family residence, and converted for use as a bed and breakfast inn. Also on the property is a domestic dependency, built about 1891.

Thomas R. Carskadon House also known as the Carskadon Mansion and "Radical Hill," is a historic home located on Radical Hill overlooking Mineral Street, in Keyser, Mineral County, West Virginia. It is the former residence of Thomas R. Carskadon, an influential Mineral County farmer and political leader. It was built about 1886, and has two sections: a 2+1⁄2-story rectangular, brick main block and a two-story rear ell. It features a hip-on-mansard roof and two one-story, brick polygonal bays. It combines features of the Italianate and French Second Empire styles. Also on the property are the ruins of a brick dairy, the cement foundations of a silo, and the stone foundations of another outbuilding. 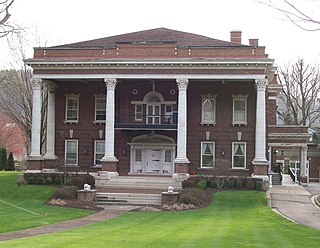 "Edemar", also known as Stifel Fine Arts Center, is a historic house and national historic district located at Wheeling, Ohio County, West Virginia. The district includes two contributing buildings and two contributing structures. The main house was built between 1910 and 1914, and is a 2+1⁄2-story, brick-and-concrete Classical Revival mansion with a steel frame. The front facade features a full-width portico with pediment supported by six Corinthian order columns. Also on the property are a contributing brick, tiled-roofed three-bay carriage barn/garage; fish pond; and formal garden. The Stifel family occupied the home until 1976, when the family gave it to the Oglebay Institute to be used as the Stifel Fine Arts Center.

Elm Hill, also known as the Campbell-Bloch House, is a historic house and national historic district located near Wheeling, Ohio County, West Virginia. The district includes two contributing buildings and one contributing site. The main house was built about 1850, and is a 2+1⁄2-story, brick house with a low 2-story wing in the Greek Revival style. It has an L-shaped plan, a 3-bay entrance portico, and hipped roof with an octagonal bell-cast central cupola. The interior has a central formal hall plan. Also on the property are a contributing brick, spring house / smoke house and a small cemetery dating to about 1835. 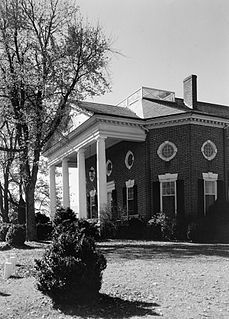 Farmington is a house near Charlottesville, in Albemarle County, Virginia, that was greatly expanded by a design by Thomas Jefferson that Jefferson executed while he was President of the United States. The original house was built in the mid-18th century for Francis Jerdone on a 1,753-acre (709 ha) property. Jerdone sold the land and house to George Divers, a friend of Jefferson, in 1785. In 1802, Divers asked Jefferson to design an expansion of the house. The house, since greatly enlarged, is now a clubhouse.

Aurora, also known as the Pink House, Boxwood, and the Penn Homestead, is a historic home located at Penn's Store near Spencer, Patrick County, Virginia. It was built between 1853 and 1856, and is a two-story, three-bay, hipped-roof frame house in the Italian Villa style. It features one-story porches on the east and west facades, round-arched windows, clustered chimneys, and low pitched roofs. Also on the property is a contributing small one-story frame building once used as an office. It was built by Thomas Jefferson Penn (1810-1888), whose son, Frank Reid Penn founded the company F.R & G. Penn Co. that was eventually acquired by tobacco magnate James Duke to form the American Tobacco Company.

Sutherland House, also known as the Sutherland-Hite House and Logan House, is a historic home located at Petersburg, Virginia. It was built between 1860 and 1862, and is a two-story, three bay, Italianate style brick dwelling. The house incorporates an 1838, one-story, former dwelling as a rear ell, and a frame addition built in 1877. The main house has a double-pile, central passage plan. The house features two unusual chimneys made up of clustered flues on a low-hipped slate roof, tripartite windows, and a Doric order portico at the entry. Also on the property is a contributing two-story, four room brick service building. 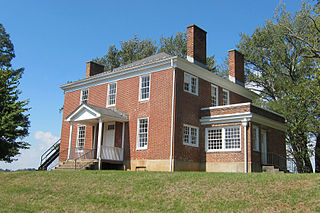 Arnheim is a historic plantation house located at Radford, Virginia. It was built between 1838 and 1840, and is a two-story, three-bay, Federal / Greek Revival–style brick dwelling. It is a symmetrical double-pile plan dwelling, 40 feet square, and sitting on a raised brick basement. In 1939, it was converted into a home economics annex for the adjacent Radford High School. Arnheim was built by Dr. John Blair Radford, for whom the City of Radford is named. The property also includes a documented contributing archaeological site.