Thomas Vaus [de Vaus, Vause] was a 15th-century Scottish royal official and cleric. He was a graduate of the University of Paris, being admitted there as a Bachelor ad eundem in 1445, graduating as a Licentiate in 1447. [1] At some stage he completed an M.A., and bore the title of "Master". His brother Martin Vaus, later Dean of Ross, was at Paris with him. [1] He became Keeper of the Privy Seal of Scotland and secretary of King James II of Scotland. [2]

On 8 May 1456, he was provided to succeed James Inglis as Dean of Glasgow Cathedral. [3] In the following year, Vaus was provided to bishopric of Galloway, vacant on the expected translation of Thomas Spens to the bishopric of Aberdeen on 21 November 1457. Unfortunately for Vaus, Spens' translation to Aberdeen was not effective, and while Spens was indeed successfully translated to Aberdeen in the following year, it was Ninian Spot, not Vaus, who on 15 December 1458 got the new provision to Galloway. The reasons for this change are not clear, but Thomas never became a consecrated Bishop of Galloway nor did he ever attain another bishopric.

Thomas Vaus resigned, sometime between 4 August 1478 and 8 June 1480, the precentorship of Moray to his relative Alexander Vaus, not to be confused with Alexander Vaus the bishop. Little is heard of Thomas after this. [6]

Ingram Lindsay [Ingeram de Lindesay], Doctor in Canon Law, was a 15th-century Scottish cleric. Despite being of illegitimate birth - one of several sons of an unmarried nobleman and an unmarried woman - he nevertheless managed in the end to pursue a successful ecclesiastical career. 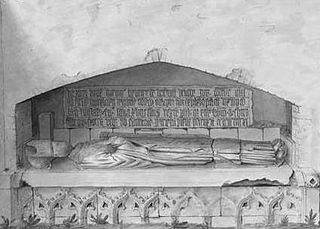 Alexander Gordon was a late medieval Scottish churchman. He was member of the kindred of the Earl of Huntly, being cousin to the reigning earl. He was the third son of James Gordon, Laird of Haddo.

Robert Forman was a late medieval Scottish churchman. He was the son of one Janet Blackadder and her husband, a Berwickshire landowner named Nicholas Forman of Hatton. Sometime before 11 February 1500, he was made Precentor of Glasgow. He was Dean of Glasgow from 1505, a position he would hold until his death. Between 1506 and 1511 he was also in possession of the Chancellorship of the diocese of Moray. 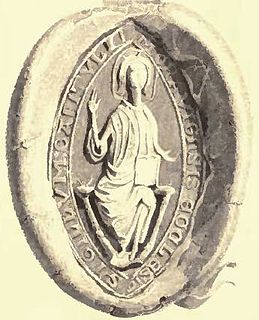 Adam de Darlington [Derlingtun] was a 13th-century English churchman based in the Kingdom of Scotland. Adam's name occurred for the first time in a Moray document datable between 1255 and 1271, where he was named as the Precentor of Fortrose Cathedral. He seems to have been introduced into the diocese of Ross, along with others from the north-east of England, by Bishop Robert de Fyvie, who may have been descended from the area.

Thomas de Dundee, also called Thomas Nicholay, was a Scottish prelate who held the bishopric of Ross during the First War of Scottish Independence. Coming from a family of Dundee burgesses, he was educated as the University of Bologna, before entering into career in the church.

John Spalding was a 15th-century churchman based at Brechin in Angus, Scotland. Spalding became Dean of Brechin in 1456; he was confirmed in this position by the Pope on 5 October 1458. 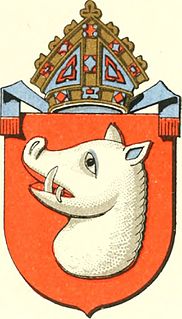 James Chisholm, Bishop of Dunblane, was the eldest son of Edmund Chisholm, the first Chisholm to own the estate of Cromlix in Dunblane parish, Strathearn, having moved from the Scottish Borders. In his early years as a clergyman, he was a chaplain to King James III of Scotland; the king apparently sent him to Rome for some time.

John de Crannach was a 15th-century Scottish scholar, diplomat and prelate. Originating in the north-east of Lowland Scotland, he probably came from a family associated with the burgh of Aberdeen. Like many of his relatives, he flourished in the 15th-century Scottish church. After just over a decade at the University of Paris, Crannach became a servant of the then Dauphin Charles (VII).