George Vaus (died 1508) was a Scottish prelate from the late 15th and early 16th century. Possessing a master's degree, he became a cleric, parson of Wigtown and on 9 December 1482, he was provided the bishopric of Galloway. He was consecrated by 9 October 1483, when he appeared before the lords auditors on behalf of Patrick Vaus,[ clarification needed ] the future Prior of Whithorn for whom George was tutor; Patrick was involved in a suit concerning certain lands, a suit which ended in the Vaus' favour. In 1504, he became Dean of the Chapel Royal at Stirling, a position with which bishops of Galloway were thereafter associated. The date of his death is not known precisely, but King James IV of Scotland attended a mass for the soul of the bishop on 30 January 1508. It is likely that Vaus' death occurred shortly before this.

James Beaton (1473–1539) was a Roman Catholic Scottish church leader, the uncle of David Cardinal Beaton and the Keeper of the Great Seal of Scotland.

Whithorn ([ˈʍɪthorn]) 'HWIT-horn'; Taigh Mhàrtainn in Gaelic), is a royal burgh in the historic county of Wigtownshire in Dumfries and Galloway, Scotland, about 10 miles (16 km) south of Wigtown. The town was the location of the first recorded Christian church in Scotland, Candida Casa : the 'White [or 'Shining'] House', built by Saint Ninian about 397. 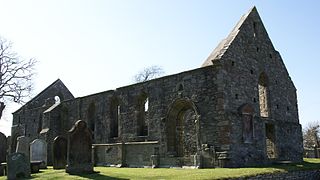 The Abbot of Fearn was the head of the Premonstratensian monastic community of Fearn Abbey, Easter Ross, Scotland. The Abbey was founded by canons from Whithorn Priory in Galloway, with the patronage of Fearchar mac an t-Sagairt, mormaer/earl of Ross. The foundation took place in the 1220s, according to the two distinct foundation dates given in the sources, either in 1221 or in 1227. Until about 1238, the Abbey was located at Fearn, near Edderton, but it was moved to the Tarbat parish in that year and known thereafter as "nova Furnia". Despite the fact that the head of Whithorn Priory was a prior and Fearn an abbot, Fearn seems to have remained subordinate to Whithorn until at least the end of the 14th century, and even in 1440 Abbot Fionnlagh II was confirmed by the prior of Whithorn.The reason for this is that Whithorn was a cathedral priory; the nominal head of its community was the bishop, but its actual head was the prior, as was the common use in England at places like Durham and Carlisle, but this was not usual in Scotland. In these circumstances the cathedral prior had the same rights as an ordinary abbot.

The Abbot of Holyrood was the head of the Augustinian monastic community of Holyrood Abbey, now in Edinburgh. The long history of the abbey came to a formal end in July 1606 when the parliament of Scotland turned the abbey into a secular lordship for the last commendator, John Bothwell. The following is a list of abbots and commendators:

Roger Gordon was a 16th-century Scottish cleric who briefly served as Bishop of Galloway.

Cruggleton Castle is a multi-period archaeological site on the coast of the Machars, in the historical county of Wigtownshire in south-west Scotland. It is located at Cruggleton Point, around 4.5 kilometres (2.8 mi) east of Whithorn and 6 kilometres (3.7 mi) south-east of Sorbie. Excavations in the 1970s and 1980s revealed several periods of use, from the 1st century AD to the 17th century. The first stone tower was built in the 13th century, on an earlier motte.