Adam de Lanark, O.P. (died 1378) was a 14th-century Scottish Dominican friar and prelate. Possibly from a Lanark burgess family, he was a Dominican and a priest by 1356, and by 1364 was styled Magister , indicating the completion of a long university education. [1] He first appears in the sources, c. 1355/6 as a confessor of King David II of Scotland; he retained this royal position through the 1350s and into the 1360s; Adam received a number of English safe-conducts (between May 1356 and August 1357) to visit King David, who for a time was a prisoner in England. [1]

Adam spent a great deal of time at the papal court in Avignon, France. He was there on 29 January 1359, as a proctor for Patrick Leuchars, Bishop of Brechin. [1] He was sent there again at some point by the crown, receiving payment for this trip sometime between August 1362 and November 1364; he is not styled "bishop elect", meaning that this trip must have occurred before 1363. [2] In 1363, Adam de Lanark was elected Bishop of Galloway and received papal provision to the vacant bishopric on 17 November 1363. [3] He was consecrated by 2 January 1364. [3] While seeking confirmation at the papal court, he probably presented a roll of petitions on behalf of King David II and did receive a number of faculties in order to grant dispensations in the bishopric of Galloway. [4]

Bishop Adam's return to Scotland is signalled by the grant of safe-conduct through England issued to him on 20 February. [4] Sometime before 25 January 1365, he was in Galloway witnessing a charter of Thomas Fleming, Earl of Wigtown. [4] He was a frequent attender of royal councils and parliaments until 1371, when his patron David II died and was replaced on the throne by David II's long-time rival, Robert Stewart, Earl of Strathearn, who became Robert II of Scotland. [4] Bishop Adam is thereafter a harder figure to trace, and little more is known about his activities besides the fact that he is said to have died at the papal court in Avignon during the vacancy of the papacy; that is, Bishop Adam died between the death of Pope Gregory XI on 27 March 1378 and the consecration of Avignon Pope Clement VII on the following 31 October. [5] 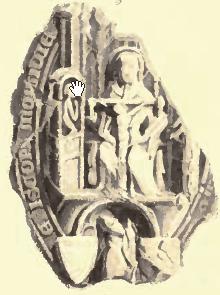 Adam de Darlington [Derlingtun] was a 13th-century English churchman based in the Kingdom of Scotland. Adam's name occurred for the first time in a Moray document datable between 1255 and 1271, where he was named as the Precentor of Fortrose Cathedral. He seems to have been introduced into the diocese of Ross, along with others from the north-east of England, by Bishop Robert de Fyvie, who may have been descended from the area.

Alexander Stewart was a 14th-century Scottish bishop. Probably from Menteith, he appears in the sources from the first half of the 1340s, possessing a university degree and holding the position of Archdeacon of Ross. He was active at the papal curia in the second half of the decade as a papal chaplain and administrator, before being provided as Bishop of Ross in 1350, a position he held until his death in 1371.

Thomas de Dundee, also called Thomas Nicholay, was a Scottish prelate who held the bishopric of Ross during the First War of Scottish Independence. Coming from a family of Dundee burgesses, he was educated as the University of Bologna, before entering into career in the church.

Laurence de Ergadia was a thirteenth-century Scottish bishop. Probably from the MacDougall kindred of Argyll, Laurence had become a Dominican friar and presumably university graduate before being elected Bishop of Argyll, an election which took place sometime between 1262 and 1264. Although the election was quashed by the Pope in 1264, the Pope gave him a fresh provision to the bishopric. Laurence appears intermittently in the records during his three and a half decade episcopate, but his activities in his own diocese are badly recorded. He died as Bishop of Argyll sometime in either 1299 or 1300.

John de Crannach was a 15th-century Scottish scholar, diplomat and prelate. Originating in the north-east of Lowland Scotland, he probably came from a family associated with the burgh of Aberdeen. Like many of his relatives, he flourished in the 15th-century Scottish church. After just over a decade at the University of Paris, Crannach became a servant of the then Dauphin Charles (VII).