Look up Thor  or thor in Wiktionary, the free dictionary.

Thor is a Germanic god associated with thunder.

Thor may also refer to:

For people in arts and entertainment, see § People.

This disambiguation page lists articles associated with the title Thor.
If an internal link led you here, you may wish to change the link to point directly to the intended article.

The PGM-17A Thor was the first operational ballistic missile of the United States Air Force (USAF). Named after the Norse god of thunder, it was deployed in the United Kingdom between 1959 and September 1963 as an intermediate-range ballistic missile (IRBM) with thermonuclear warheads. Thor was 65 feet (20 m) in height and 8 feet (2.4 m) in diameter. It was later augmented in the U.S. IRBM arsenal by the Jupiter.

Loki is the god of mischief in Norse mythology.

Striker or The Strikers may refer to:

A hammer is a type of tool.

A vixen is a female fox.

The grizzly or grizzly bear is the great brown bear of North America.

Viper mostly refers to the snake family Viperidae. This may also refer to:

A rocket is a vehicle, missile, or aircraft propelled by an engine that creates thrust from a high speed exhaust jet made exclusively from propellant.

Ragnarök is a series of events in Norse mythology resulting in the fiery destruction and fertile rebirth of the world.

A wolverine is a stocky and muscular carnivorous mammal that resembles a small bear.

A gremlin is a mythological mischievous creature. 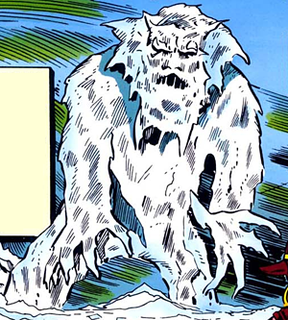 Jane Foster is a fictional superhero appearing in American comic books published by Marvel Comics. The character was introduced as a love interest of the superhero Thor Odinson until becoming a superhero in her own right. Created by writers Stan Lee and Larry Lieber, and artist Jack Kirby, the character first appeared in Journey into Mystery #84. For many years, Foster was a nurse, employed by Dr. Donald Blake, Thor's first mortal host, before becoming a doctor herself. Foster is later revealed to be deemed worthy to wield Thor's hammer Mjolnir when the former is no longer able. During this period, she adopts the mantle of Thor, and joins the Avengers. Foster's stint as Thor ends with the character sacrificing her life and the mantle reverting to the original Thor. After Brunnhilde and the rest of the Valkyrior are killed during "The War of the Realms" storyline, Foster takes up the mantle of Valkyrie.

Beast most often refers to:

Doom is another name for damnation. 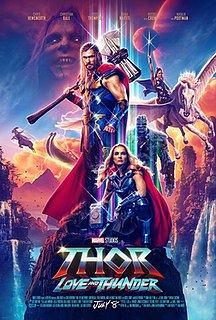 Thor: Love and Thunder is a 2022 American superhero film based on Marvel Comics featuring the character Thor, produced by Marvel Studios and distributed by Walt Disney Studios Motion Pictures. It is the sequel to Thor: Ragnarok (2017) and the 29th film in the Marvel Cinematic Universe (MCU). The film is directed by Taika Waititi, who co-wrote the script with Jennifer Kaytin Robinson, and stars Chris Hemsworth as Thor alongside Christian Bale, Tessa Thompson, Jaimie Alexander, Waititi, Russell Crowe, and Natalie Portman. In the film, Thor attempts to find inner peace, but must return to action and recruit Valkyrie (Thompson), Korg (Waititi), and Jane Foster (Portman)—who is now the Mighty Thor—to stop Gorr the God Butcher (Bale) from eliminating all gods. 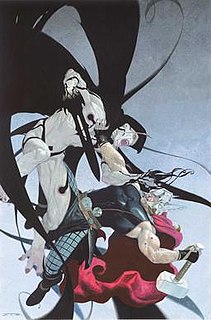 Gorr the God Butcher is a supervillain appearing in American comic books published by Marvel Comics.

Doctor Jane Foster is a fictional character in the film and television franchise Marvel Cinematic Universe (MCU) portrayed by Natalie Portman. Based on the character of the same name from Marvel Comics created by Stan Lee, Larry Lieber, and Jack Kirby.