Thor is a royalty free video codec under development by Cisco Systems. The specifications of Thor were available in various Internet-Drafts. [1]

On July 22, 2015, Thor was presented to the IETF as a candidate for their NETVC video standard. [2] Thor uses some Cisco elements that are also used by HEVC. [3] As part of the NETVC work, the Constrained Low-Pass Filter (CLPF) and motion compensation techniques used in Thor were tested in conjunction with the lapped transform coding techniques from the Daala codec. [4]

On September 1, 2015, Cisco announced that the Alliance for Open Media would use elements of Thor to develop a royalty free video format, AOMedia Video 1. [5] [6] [7]

According to Steinar Midtskogen, a principal Thor developer and AV1 contributor, Thor is in good shape for real-time CPU encoding (as of NETVC meeting 101, March 19, 2018), in strong contrast to AV1 at the same time. [8] Thor development had stalled for the finalization of AV1, but Midtskogen envisaged further Thor development by merging the Daala entropy coder and adding more tools for screen content. [9]

FFmpeg is a free and open-source project consisting of a vast software suite of libraries and programs for handling video, audio, and other multimedia files and streams. At its core is the FFmpeg program itself, designed for command-line-based processing of video and audio files, and widely used for format transcoding, basic editing, video scaling, video post-production effects, and standards compliance.

Xiph.Org Foundation is a nonprofit organization that produces free multimedia formats and software tools. It focuses on the Ogg family of formats, the most successful of which has been Vorbis, an open and freely licensed audio format and codec designed to compete with the patented WMA, MP3 and AAC. As of 2013, development work was focused on Daala, an open and patent-free video format and codec designed to compete with VP9 and the patented High Efficiency Video Coding.

VP8 is an open and royalty free video compression format created by On2 Technologies as a successor to VP7 and owned by Google from 2010.

SILK is an audio compression format and audio codec developed by Skype Limited, now a Microsoft subsidiary. It was developed for use in Skype, as a replacement for the SVOPC codec. Since licensing out, it has also been used by others. It has been extended to the Internet standard Opus codec.

High Efficiency Video Coding (HEVC), also known as H.265 and MPEG-H Part 2, is a video compression standard, designed as a successor to the widely used Advanced Video Coding. In comparison to AVC, HEVC offers from 25% to 50% better data compression at the same level of video quality, or substantially improved video quality at the same bit rate. It supports resolutions up to 8192×4320, including 8K UHD, and unlike the primarily 8-bit AVC, HEVC's higher fidelity Main10 profile has been incorporated into nearly all supporting hardware. HEVC is competing with the royalty-free AV1 coding format for standardization by the video standard working group NetVC of the Internet Engineering Task Force (IETF).

The HTML5 specification introduced the video element for the purpose of playing videos, partially replacing the object element. HTML5 video is intended by its creators to become the new standard way to show video on the web, instead of the previous de facto standard of using the proprietary Adobe Flash plugin, though early adoption was hampered by lack of agreement as to which video coding formats and audio coding formats should be supported in web browsers. 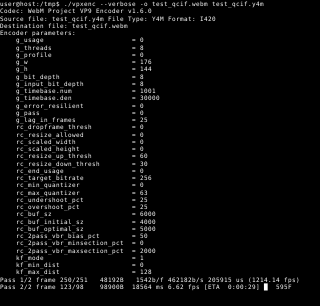 libvpx is a free software video codec library from Google and the Alliance for Open Media (AOMedia). It serves as the reference software implementation for the VP8 and VP9 video coding formats, and for AV1 a special fork named libaom that was stripped of backwards compatibility.

x265 is a library for encoding video into the High Efficiency Video Coding (HEVC/H.265) video compression format that was developed and standardized by the ISO/IEC MPEG and ITU-T VCEG. x265 is offered under either version 2 of the GNU General Public License (GPL) or a commercial license, similar to the x264 project.

Libav is a free software project, forked from FFmpeg in 2011, that produces libraries and programs for handling multimedia data.

VP9 is an open and royalty-free video coding format developed by Google.

Daala is a video coding format under development by the Xiph.Org Foundation under the lead of Timothy B. Terriberry mainly sponsored by the Mozilla Corporation. Like Theora and Opus, Daala is available free of any royalties and its reference implementation is being developed as free and open-source software. The name is taken from the fictional character of Admiral Natasi Daala from the Star Wars universe.

The Internet Video Codec (NETVC) is a standardization project for a royalty-free video codec hosted by the IETF. It is intended to provide a royalty-free alternative to industry standards such as MPEG-4 and HEVC that require licensing payments for many uses. The group has put together a list of criteria to be met by the new video standard.

The Alliance for Open Media (AOMedia) is a non-profit industry consortium for the development of open, royalty-free technology for multimedia delivery headquartered in Wakefield, Massachusetts. It adopts the principles of the development of open web standards for the creation of video standards that can serve as royalty-free alternatives to the hitherto dominant standards of the Moving Picture Experts Group (MPEG) and the related business model that exploits intellectual property through patent royalties and became associated with financial uncertainties, especially for internet companies and innovators.

High Efficiency Image File Format (HEIF) is a container format for individual images and image sequences. It was developed by the Moving Picture Experts Group (MPEG) and is defined by MPEG-H Part 12. The MPEG group claims that twice as much information can be stored in a HEIF image as in a JPEG image of the same size, resulting in a better quality image. HEIF also supports animation, and is capable of storing more information than an animated GIF at a small fraction of the size.

Internet Video Coding is a video coding standard. IVC was created by MPEG, and was intended to be a royalty-free video coding standard for use on the Internet, as an alternative to non-free formats such as AVC and HEVC. As such, IVC was designed to only use coding techniques which were not covered by royalty-requiring patents.