Thor Industries, Inc. is an American manufacturer of recreational vehicles (RVs). The company sells towable and motorized RVs through its subsidiaries brands including Airstream, Heartland RV, Jayco, Livin Lite RV, and others. The company's headquarters is in Elkhart, Indiana. It has manufacturing facilities in Michigan, Ohio, Indiana, Idaho, and Oregon. [2]

Thor Industries, Inc. was founded on August 29, 1980, [3] when Wade F. B. Thompson and Peter Busch Orthwein acquired Airstream from Beatrice Foods. The name "Thor" combined the first two letters of each entrepreneur's name. [4] Airstream had not fared well during the economic downturn of the late 1970s, losing $12 million the year before it was acquired. [5] Thompson and Orthwein had also previously acquired the Hi-Lo Trailer Company. [5] Thor restructured Airstream and returned Airstream to profitability within one year. [6]

In 1982, Thor acquired the Canada-based General Coach, a manufacturer of travel trailers and motorhomes. [7] The company went public in 1984 and joined the New York Stock Exchange under the stock ticker symbol "THO" in 1986. Thor purchased The Establishment “McPheters Machine Products” which was a manufacturer of Both Class A and C motorhomes. which was [6] In 1986, it was listed among Forbes ' "200 best small companies in America". [7]

Thor added to its roster of bus manufacturers by acquiring the Michigan-based Champion Bus for $11 million in 1998. [17] The company finalized a $145-million deal in 2001 to acquire Keystone RV, an Elkhart, Indiana-based manufacturer of travel trailers and fifth wheels. The deal was one of the largest in the history of the company and gave Thor a 25% market share in travel trailers and fifth wheels. [18] In 2003, it added Damon Motor Coach of Elkhart, Indiana which it purchased for $46 million in cash. Damon's park trailer subsidiary brand, Breckenridge, was also included in the deal. [19] The following year, Thor acquired Topeka, Indiana-based CrossRoads RV for $27 million. [20]

In May 2005, Thor acquired Goshen Coach, a bus manufacturer from Indiana that had filed for Chapter 11 bankruptcy earlier in the month. [21] In November 2009, Wade Thompson stepped down as the company's CEO and was replaced by Peter Busch Orthwein. Orthwein had served as the company's treasurer and director since founding it. [22] Soon after the announcement, Thompson passed away due to complications of colon cancer. [5]

In March 2010, Thor acquired SJC Industries, an Elkhart-based manufacturer of ambulances, for $20 million. SJC's brands of McCoy Miller, Marque, and Premiere were also included in the sale. [23] In April of that year, the company sold its Canadian General Coach subsidiary to management. [24] Later in 2010, Thor acquired Heartland RV, another Elkhart-based maker of fifth wheels and lightweight RVs. [25] The company also consolidated Damon Motor Coach and Four Winds International to create Thor Motor Coach that year. [26]

2013–present: Acquisitions of Jayco and Hymer

In June 2013, Thor purchased the production site in Wakarusa, Indiana that formerly housed the manufacturing operations of Navistar International. [32] It later acquired the former Monaco Coach facility in Wakarusa and combined the two to create the Wakarusa Production Campus. [33] In August 2013 then-COO Bob Martin took over as CEO of the company with Peter Orthwein moving to Chairman. [34] It also acquired the assets of Livin Lite RV's in 2013, [35] as well as Bison Coach, a manufacturer of horse trailers that have RV-style living quarters. [33]

Thor acquired of K-Z Inc., a manufacturer of primarily travel trailers based in Shipshewana, Indiana, in 2014. [36] In January 2015, Thor's Heartland subsidiary acquired the RV company, Cruiser RV, and the luxury fifth wheel manufacturer, DRV. [37] In May of that year, Thor purchased Postle Aluminum, a provider of aluminum components that were already in frequent use by Thor and its subsidiaries. [38]

In July 2016, Thor acquired Jayco Inc. for $576 million. Jayco, based in Middlebury, Indiana, had been the largest privately owned RV maker in the world prior to the sale. Jayco's subsidiares (including Starcraft RV, Highland Ridge, and Entegra Coach) also came under the Thor umbrella. [39] In September 2018, it was announced that Thor had agreed to purchase Hymer, a German manufacturer of RVs, in a deal worth $2.45 billion in the largest acquisition in the company's history. Hymer is the largest RV manufacturer in Europe. As a result of the deal, Thor Industries became the largest RV manufacturer in the world. [40] The sale was officially finalized in February 2019. [41]

Airstream is manufacturer of travel trailers and motor homes, known for its distinctive all-aluminum models. It was founded by Wally Byam in the 1930s and has had manufacturing facilities in Jackson Center, Ohio since the 1950s. It was sold to Beatrice Foods in 1967. In 1980, it became the foundation of Thor Industries after it was acquired by Wade Thompson and Peter Busch Orthwein. [42] Airstream sells numerous models including the Flying Cloud, Classic, Nest, International Signature, and Basecamp. [43]

Heartland RV is an Elkhart, Indiana-based manufacturer of fifth wheels and travel trailers. It was founded in 2003 by Brian Brady and was acquired by Thor in 2010. Heartland produces a range of brands including the BigHorn line, Sundance and Cyclone models. [44]

Hymer is a German manufacturer of RVs based in Bad Waldsee. It was founded in 1923 by Erwin Hymer, but did not create its first caravan (travel trailer) until 1957. It was acquired by Thor in 2019 as Thor's first acquisition outside of the United States. [45]

Dutchmen is a manufacturer of RVs based in Goshen, Indiana. It was founded in 1988 by Dave Hoefer, Glen M. Sylvester, and Larry Schrock and became the second-largest manufacturer of travel trailers and fifth wheels in the United States by 1990. It was acquired by Thor Industries in 1991. [11] Dutchmen manufactures brands like the Aerolite, Coleman, Denali, Kodiak, Aspen Trail, and others. [46]

Jayco is an RV maker based in Middlebury, Indiana. It was founded in 1968 by Lloyd and Bertha Bontrager and was acquired by Thor in 2016. It makes a variety of fold-down camping trailers, fifth wheels, motorhomes, toy haulers, and other travel trailers with brands like Starcraft RV, Highland Ridge and Entegra Coach. [39]

Keystone RV is a Goshen, Indiana-based RV manufacturer. It was founded in 1996 by Cole Davis and was listed at number 2 on the Inc. 500 list of the fastest growing companies in 2000. [47] It was acquired by Thor in 2001 and manufactures luxury travel trailers and fifth wheel brands including Cougar, Montana, Laredo, Passport, and Sprinter. [18]

Thor Motor Coach, a motor home manufacturer in Elkhart, Indiana, was created in 2010 through a consolidation of Four Winds International and Damon Motor Coach. [26] Four Winds was first acquired by Thor in 1992 [12] and Damon was acquired in 2003. [19] 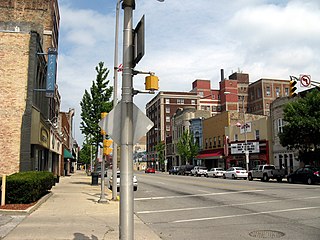 Elkhart is a city in Elkhart County, Indiana, United States. The city is located 15 miles (24 km) east of South Bend, Indiana, 110 miles (180 km) east of Chicago, Illinois, and 150 miles (240 km) north of Indianapolis, Indiana. Elkhart has the larger population of the two principal cities of the Elkhart-Goshen Metropolitan Statistical Area, which in turn is part of the South Bend-Elkhart-Mishawaka Combined Statistical Area, in a region commonly known as Michiana. The population was 50,949 at the 2010 census. Despite the shared name, it is not the county seat of Elkhart County; that position is held by the city of Goshen, located about 10 miles (16 km) southeast of Elkhart. 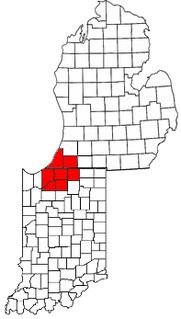 Michiana is a region in northern Indiana and southwestern Michigan centered on the city of South Bend, Indiana. The Chamber of Commerce of St. Joseph County, Indiana defines Michiana as St. Joseph County and "counties that contribute at least 500 inbound commuting workers to St. Joseph County daily." Those counties include Elkhart, La Porte, Marshall, St. Joseph, and Starke in Indiana, and Berrien and Cass in Michigan. As of the 2010 census, the population of those seven counties was 856,377.

A motorhome is a type of self-propelled recreational vehicle (RV) which offers living accommodation combined with a vehicle engine. 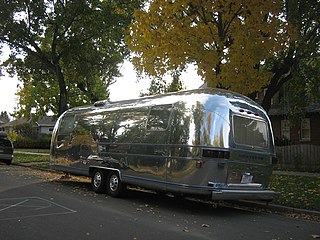 Airstream is an American brand of travel trailers which are easily recognized by the distinctive shape of their rounded and polished aluminum coachwork. This body shape dates back to the 1930s and is based on designs created by Hawley Bowlus, who had earlier overseen construction of Charles Lindbergh's aircraft, the Spirit of St. Louis. 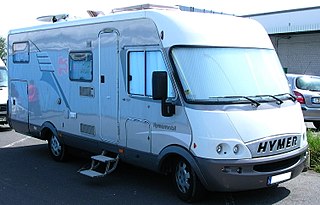 Hymer AG is a motorhome and caravan manufacturer, located in Bad Waldsee, Germany. One of the largest manufacturers of motorhomes and caravans in Europe, the listed company Hymer AG owns several brands, including; Burstner, Carado, Sunlight, Etrusco, Elddis, Hymer, Laika, LMC, Niesmann + Bischoff, Dethleffs, Eriba, as well as camping equipment wholesale Movera. In February 2017 it acquired The Explorer Group based in Consett, UK adding the Elddis, Buccaneer, Compass and Xplore brands to its portfolio.

All American Group was an American company whose divisions produced pre-fabricated housing. Based in Elkhart, Indiana, it was founded in 1964 as Coachmen Industries. It was listed on the New York Stock Exchange under the symbol COA until 2009, when it was delisted for failing to maintain continued NYSE listing standards.

Spartan Motors, Inc. is an American automobile design company that designs, engineers and manufactures specialty chassis, specialty vehicles, truck bodies and aftermarket parts for the recreational vehicle (RV), emergency response, government services, defense, and delivery and service markets. The company is based in Charlotte, Michigan, and employs approximately 2,300 workers at facilities in Michigan, Arizona, California, Florida, Indiana, Missouri, Nebraska, Pennsylvania, South Carolina, South Dakota, Texas, Wisconsin, and Mexico. Spartan reported sales of $707 million in 2017. It was started in 1975 as a direct result of the bankruptcy of Diamond Reo. 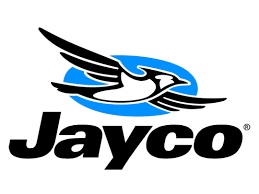 Jayco, Inc., a subsidiary of Thor Industries, is an American manufacturer of recreation vehicles. The company manufactures fold-down camping trailers, conventional travel trailers, toy haulers, fifth-wheel travel trailers, and motorhomes. Jayco is based in Middlebury, Indiana, and about three-quarters of its 3,200-person workforce is from the Amish and Mennonite communities of Indiana.

Heartland RVs is an American manufacturer of recreational vehicles located in Elkhart, Indiana. Founded by former Damon Corp. CEO Brian Brady in 2003, it was purchased and became a subsidiary of Thor Industries in 2010.

The RV/MH Hall of Fame is a 100,000 sq. ft. museum in Elkhart, Indiana that features a variety of historical recreational vehicles from Airstream, Winnebago and other American makers. The foundation states that their primary goals are to "To create a display of historic RV/MH products in a museum for the education and enjoyment of the public."

Livin Lite RV was an American manufacturer of recreation vehicles sold under the CampLite and QuickSilver brands. It was based in Shipshewana, Indiana. The company was most recently managed by KZ Inc., a subsidiary of Thor Industries. Livin Lite made truck campers, fold-down tent camping trailers, travel trailers, and toy haulers. They were known for their advanced lightweight aluminum construction techniques.