Thorapadi is a part of Vellore Corporation. It is a prominent area in the city of Vellore.

Thorapadi is located at 12.93° N 79.13° E. It has an average elevation of 216 metres (708 feet). It is surrounded by sripuram in the south, Allapuram in the north, Otteri-Bagayam in the east and Great Thorapadi Lake in the west.

Ram Chandrasekaran a native of this place informs that there is no recorded history for the name reference for Thorapadi. Padi is the common name for residential areas in Agricultural adjoining Hilly areas(cf: Hindi/Sanskrit Pahad meaning Hill) and that is why we find many villages having suffix 'padi' in Tamil Land viz.Velapadi, Katpadi etc. Thorapadi would have derived its name from Thiru Padi and now corrupted to form Thorapadi. Thiru is a common name for almost all towns and cities in Tamil Nadu viz. Thiruvannamalai, Thirupattur and there are so many places starting with Prefix Thiru meaning 'the blessed'. The prominence of the place can be traced back to Britishers establishing a Central Prison during the 1800s.

Thorapadi can be subdivided into crowded north and relatively well planned south.

(see Wikipedia: Kamaraj Nagar ) Kamaraj Nagar (Tamil: காமராஜ் நகர்) in southern Thorapadi, is primarily a residential neighbourhood of mainly posh dwellings, which is cool and greenery with concrete roads. It is one of the rapid developing parts of the city of Vellore. The area is named after the late chief minister of Tamil Nadu, Kamaraj. A Government higher secondary school, Vellore Central Prison, a Badminton Training School and a Theatre make Kamaraj Nagar unique in Thorapadi. Also, it is the center of local cricketing events, thanks to a huge sports(though undeveloped) ground located within Government Higher Secondary School (no fancier of local cricket can forget Kamaraj Nagar Cricket Club's breath taking victory over Punthottam Cricket Team in the finals of Millennium tournament here in 2000).

In addition to being a residential area, Kamaraj Nagar has become a busy traffic route to the Srilakshmi Golden Temple, Sripuram. The real estate market in Kamaraj Nagar and its southern extension, has been skyrocketing after the unveiling of Golden Temple.

Nethaji Street is one of the main streets Thorapadi.[ citation needed ]

Ezhil Nagar is a major (in terms of land area) residential area, which has seen an immense development in recent years. It is one of the youngest and thriving residential areas of the city. Warders training Institute of Tamil Nadu is located here.

Punthottam is a less populated area adjacent to the Great Thorapadi Lake (the lake is one of the biggest of its kind in the region).[ citation needed ]

Police Housing Board is an area located on the Ariyur Railway Gate with civilized houses for Police Men.[ citation needed ]

chinna agamedu is a least populated. And one of the most agriculture place in end of the thorapadi lake.[ citation needed ]

Pillaiyar or Lord Ganesha or Lord vinayaga the God of Good Characters is at the fag end of the Big Street or Pillaiyar koil Street. At the entry point from Azad Road (main ) Road side another prominent Temple dedicated to Lord Muruga, His heavenly brother is located. 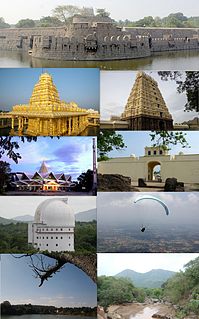 Vellore is a city and the administrative headquarters of Vellore district in the Indian state of Tamil Nadu. It is located on the banks of the Palar River in the northeastern part of Tamil Nadu and is separated into four zones that are further subdivided into 60 wards, covering an area of 87.915 km2 and housing a population of 423,425 as reported by the 2001 census. It is located about 137.20 kilometres (85 mi) west of Chennai, and about 213.20 kilometres (132 mi) east of Bangalore. Vellore connects Mumbai - Chennai and Vellore connects most of the Indian cities. Vellore is governed under a mayor and the Vellore Municipal Corporation. It is a part of both the Lok Sabha and state assembly constituencies of Vellore. 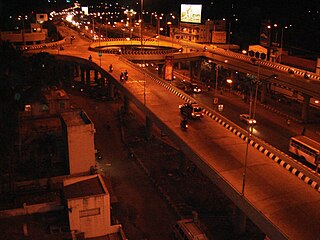 Chromepet is a prime residential neighbourhood and a shopping district in Chennai, Tamil Nadu, India. It is located 22 km from the Chennai Central Railway Station. It lies on both sides of the Grand Southern Trunk, close to Thirumudivakkam and Tambaram, and next to Pallavaram. The 200-feet road connects Chromepet with Thoraipakkam. Chromepet is 6 km from Outer Ring Road, Thirumudivakkam, and 4 km south of the Chennai International Airport at Trisulam. It is the home to the famous Madras Institute of Technology, the institute where Dr. A. P. J. Abdul Kalam, former president of India, and Tamil writer Sujatha studied. The neighbourhood is served by the Chromepet railway station of the Chennai Suburban Railway Network and is a residential locality. Chromepet votes for the Sriperumbudur parliamentary constituency in the Indian national elections.

Perambur is a neighbourhood in the northern region of Chennai, Tamil Nadu, India. It is 4 km from Chennai Central station.

Panapakkam is a panchayat town in Nemili Taluk of Ranipet district in the Indian state of Tamil Nadu.This town is located in the Vellore District about 85 kilometres from the state capital of Chennai. Panapakkam is supposedly one of the hottest towns in India, where the temperature can exceed 43 °C (110 °F) for several days in peak of the summer.

Sembakkam is a residential locality in Greater Chennai City in Tamil Nadu State, India. It is located between Tambaram and Medavakkam and belongs to Tambaram Taluk Region.

Valasaravakkam is a neighbourhood in the Chennai district of the Indian state of Tamil Nadu and a residential suburb of the city of Chennai. It is located in the Poonamallee Taluk at a distance of approximately 15 kilometres from the Kilometer Zero stone. Valasaravakkam lies on the Arcot Road, one of Chennai's arterial roads. It is under the Maduravoyal election constituency. In October, 2011 Valasaravakkam Municipality ceased to exist and the area became part of Chennai Corporation as Ward Nos 149 and 152, Southern Region, Corporation of Chennai. As of 2011, the town had a population of 47,378. Famous Sivan temple is in kesavardhini.

Korattur is situated in the western part of Chennai. It is a part of the Ambattur Zone of Chennai Corporation and located along the Chennai-Bangalore/Mumbai railroad about 12 km from the Chennai Central. It is developed with TNHB Layouts similar to Anna Nagar and the southern section of Korattur located near Padi is often considered to be an integral part of Anna Nagar.

Alwarthirunagar is an urban locality in Chennai, the capital city of Tamil Nadu, India. Alwarthirunagar Pin code is 600087 and postal head office is Valasaravakkam. It falls under Valasaravakkam municipality, in Maduravoyal constituency in Tiruvallur district in the Indian state of Tamil Nadu. The word nagar refers to a settlement in sanskrit. The neighbourhood was developed by the City Lando Corporation in the late 1960s. With the opening of schools and shopping centres, Alwarthirunagar emerged as a service centre in Chennai's west. Twenty acres of forestation in the area acts against pollution. The area is traversed by state road number 113.

Jafferkhanpet is a locality of Chennai, India. Guindy, K.K. Nagar, Ashok Nagar, MGR Nagar, Saidapet are its neighbourhood suburbs. You can reach Jafferkhanpet by travelling in the newly constructed Guindy flyover. This allows easier access to Vadapalani, Koyambedu bus stand in Chennai. Jafferkhanpet is twin locality of Ashok nagar

Located in the Indian state of Tamil Nadu, Vinayagapuram is a northern region of Chennai city's Chennai district.

Devikapuram, also called Devigai, is a town and a Panchayat board in Tiruvannamalai district, located in Tamil Nadu, India. The town is famous for handlooms, Silk weaving and ricemills, which process Arni Ponni rice. Located on the Polur - Sadras state higheway, 45 kilometres from the city of Tiruvannamalai, also the District headquarters.

Peravallur, is a developed residential area in Central Chennai, a metropolitan city in Tamil Nadu state, in India.

Agaram is a neighbourhood of Perambur and a developed residential area in North Chennai, a metropolitan city in Tamil Nadu, India.