Thorndale is an 'L' station on the CTA's Red Line. It is located at 1118 West Thorndale Avenue in the Edgewater neighborhood of Chicago, Illinois. The adjacent stations are Granville, located about one quarter mile to the north, and Bryn Mawr, about one half mile to the south. Four tracks pass through the station, but there is only a single island platform in the center of the tracks; Purple Line weekday rush hour express service use the outside tracks but do not stop at this station.

A temporary station opened at Thorndale in 1915. This was replaced with a permanent station built to a design by architect Charles P. Rawson in 1921 as part of a project by the Northwestern Elevated Railroad to raise the tracks between Wilson and Howard onto an embankment. [3]

Closure of the Thorndale station (along with Lawrence, and Jarvis on the Red Line and South Boulevard and Foster on the Purple Line) was proposed in of three of the CTA's six potential options for the renovation of the Purple Line and northern section of the Red Line. [4] In two plans, the station would be replaced by new auxiliary entrances at Glenlake from Granville and Hollywood from Bryn Mawr. In the third, replacement would be by auxiliary entrances at Elmdale from a new subterranean station at Glenlake and at Hollywood from a new station at Bryn Mawr. [5]

The Red Line is a rapid transit line in Chicago, run by the Chicago Transit Authority (CTA) as part of the Chicago "L" system. It is the busiest line on the "L" system, with an average of 209,085 passengers boarding each weekday in 2019. The route is 26 miles (42 km) long with a total of 33 stations. It runs elevated from the Howard station in the Rogers Park neighborhood on the North Side, through a subway on the Near North Side, Downtown, and the South Loop, and then through the Dan Ryan Expressway median to 95th Street in the Roseland neighborhood on the South Side. Like Chicago's Blue Line, the Red Line runs 24 hours a day, 365 days a year, making Chicago and New York City the only cities in the United States that operate train service 24 hours a day. The city of Chicago is planning an extension of the Red Line, adding 5.6 miles and four new stations, that would extend the Red Line from 95th/Dan Ryan to 130th Street.

Edgewater is a lakefront community area on the North Side of the city of Chicago, Illinois six miles north of the Loop. The last of the city's 77 official community areas, Edgewater is bounded by Foster Avenue on the south, Devon Avenue on the north, Ravenswood Avenue on the west, and Lake Michigan on the east. Edgewater contains several beaches that residents enjoy during the late spring, summer, and early autumn. Chicago's largest park, Lincoln Park, stretches south from Edgewater for seven miles along the waterfront, almost to downtown. Historically, Edgewater was the northeastern corner of Lake View Township, an independent suburb annexed by the city of Chicago in 1889. Today, the Uptown community is to Edgewater's south, Lincoln Square to its west, West Ridge to its northwest and Rogers Park to its north. 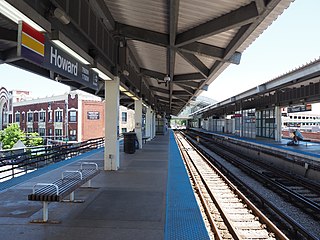 Howard is an 'L' station in Chicago, Illinois. It is the northern terminus of the Red Line and the southeastern terminus of the Yellow Line; it also serves the Purple Line, for which it is the southern terminus at non-rush hour times on weekdays and all day on weekends. Trains on the Chicago North Shore and Milwaukee Railroad also stopped at Howard from 1926 until that line was abandoned in 1963.

Chicago is an "L" station on the CTA's Red Line. It serves a significant portion of the Near North Side and Streeterville neighborhoods. With 5,259,992 overall boardings in 2014, it is the busiest station on the Red Line north of the Loop.

Granville is a station on the Chicago Transit Authority's Red Line, part of the Chicago 'L' rapid transit system. It is located at 1119 West Granville Avenue in Chicago, Illinois. It is in the Edgewater neighborhood, close to the Rogers Park border. From Granville, trains take 36 minutes to reach the Chicago Loop. Purple Line weekday rush hour express service use the outside tracks but do not stop at this station.

Berwyn is a temporarily closed 'L' station on the CTA's Red Line. It is located at 1121 West Berwyn Avenue in the Edgewater neighborhood of Chicago, Illinois. The adjacent stations are Bryn Mawr, located about 3⁄8 mile (0.60 km) to the north, and Argyle, about 1⁄3 mile (0.54 km) to the south, both still in service and serving as alternate stations. Four tracks pass through the station, but there is only single island platform in the center of the tracks. The two eastern tracks are temporarily out of service for construction and trains on both the Red and Purple Lines pass Berwyn on the western tracks without stopping. When it reopens, it will consist of an island platform with Red Line trains stopping on the inner tracks and Purple Line Express trains bypassing the station on the outer tracks. Berwyn is named for the Berwyn station in the community of the same name, which is west of Philadelphia. Many of the roads in the Edgewater neighborhood are named after stations on the former PRR Main Line.

Loyola is a station on the Chicago Transit Authority's 'L' system, served by the Red Line. It is located at 1200 West Loyola Avenue in the Rogers Park neighborhood of Chicago, Illinois. The station has high ridership by students from the nearby Lakeshore Campus of Loyola University Chicago. The Red Line right-of-way runs directly through the southwest corner of the campus. Purple Line weekday rush hour express service use the outside tracks but do not stop at this station. 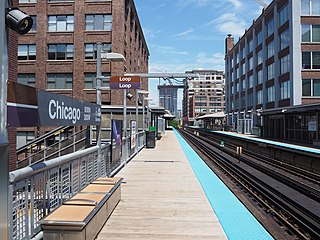 Chicago is an 'L' station on the CTA's Brown and Purple Lines. Located in the Near North Side neighborhood at 300 W Chicago Avenue at West Chicago Avenue and North Franklin Street in Chicago, Illinois, the station opened in 1900 as part of the original series of stations on the Northwestern Elevated. A high density of art galleries and several schools is in the vicinity of the station, including the Moody Bible Institute.

Argyle is a station on the Chicago Transit Authority's 'L' system. It is situated between the Berwyn and Lawrence stations on the Red Line, which runs from Rogers Park at Chicago's northern city limits, through downtown Chicago, to Roseland. It is an elevated station with an island platform serving northbound trains and a temporary side platform serving southbound trains located at 1118 West Argyle Street in the West Argyle Street Historic District of Chicago's Uptown community area. Purple Line weekday rush hour express service use the outside tracks but do not stop at this station. 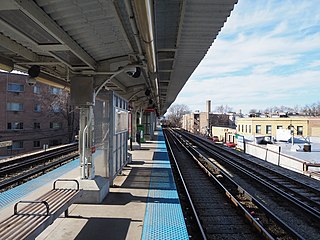 Jarvis is an 'L' station on the CTA's Red Line, located at 1523 W. Jarvis Avenue in the Rogers Park neighborhood of Chicago, Illinois. 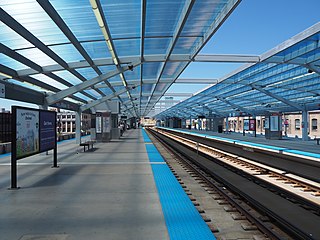 Wilson is an 'L' station on the CTA's Red and Purple Lines, located at 4620 North Broadway in the Uptown neighborhood of Chicago, Illinois.

Fullerton is an 'L' station on the CTA's Red and Brown Lines. Purple Line Express trains also stop at the station during weekday rush hours. It is an elevated station with two island platforms, serving four tracks, located in the Lincoln Park neighborhood in Chicago, Illinois. Brown and Purple Line trains share the outer tracks while Red Line trains run on the inner tracks. As well as being an important transfer station, the station serves the Lincoln Park Campus of DePaul University.

Bryn Mawr is an 'L' station on the CTA's Red Line. It is located at 1119 West Bryn Mawr Avenue in the Bryn Mawr Historic District of the Edgewater neighborhood of Chicago, Illinois. The adjacent stations are Thorndale, located about one half mile to the north, and Berwyn, about three eighths of a mile to the south. Four tracks pass through the station, but the two western tracks are currently out of service for reconstruction. There is an island platform in the center of the tracks and a side platform adjacent to the western track; Purple Line weekday rush hour express service pass through the station in the same tracks used by the Red Line but do not stop. The name "Bryn Mawr" comes from the SEPTA Regional Rail station located northwest of Philadelphia in the community of the same name. The name came to the area in the 1880s by Edgewater developer John Lewis Cochran, and is Welsh for "Big Hill."

Lawrence is a temporarily closed 'L' station on the Chicago Transit Authority's Red Line. It is an elevated station located at 1117 West Lawrence Avenue in the Uptown neighborhood of Chicago, Illinois. The adjacent stations are Argyle, located about 1⁄3 mile (0.54 km) to the north, and Wilson, about 1⁄4 mile (0.40 km) to the south, serving as alternate stations remaining open while Lawrence is closed for reconstruction. Four tracks pass through the station, though the two eastern tracks are out of service for reconstruction, with a single island platform in the center of the tracks; Purple Line weekday rush hour express service use the outside tracks and do not stop.

Central is a station on the Chicago Transit Authority's 'L' system and is located at 350 North Central Avenue in the Austin neighborhood on Chicago's West side.

Grand is an "L" station on the CTA's Red Line. It serves Navy Pier, which is accessible via bus on Illinois Street one block south.

Cumberland is a station on the Chicago Transit Authority's 'L' system. Situated on the Blue Line between Rosemont and Harlem, the station is located in the median of the Kennedy Expressway at Cumberland Avenue in the O'Hare neighborhood on Chicago's Northwest Side. It is also in close proximity to both the Norwood Park neighborhood and the city of Park Ridge. The area surrounding the station consists of mixed commercial and residential development.

Harlem, also known as Harlem/Higgins, is a Chicago "L" station on the Chicago Transit Authority's Blue Line. It is not to be confused with the other Harlem Blue Line station. Trains run from Harlem every 2–7 minutes during rush hour, and take 30–45 minutes to travel to the Loop. O'Hare-bound trains take 10 minutes to reach the airport from Harlem. The station is located in the median of the Kennedy Expressway.

The North Side Main Line is a branch of the Chicago "L" system that is used by Red, Purple, and Brown Line trains. As of 2012, it is the network's busiest rail branch, serving an average of 123,229 passengers each weekday. The branch is 10.3 miles (16.6 km) long with a total of 21 stations, from Howard Street in Rogers Park down to Lake Street in Chicago's Loop. The branch serves the north side of the city 24 hours a day, seven days a week.

In the spring of 2012, Chicago Transit Authority started a station and track rehabilitation program dubbed "Red Ahead", beginning on the North Side Main Line, which is called the "Red North" project. The program monitors the full route of the Red Line, which does not include the stations of Loyola, Bryn Mawr, Sheridan, or Wilson. Stations between Wilson through Fullerton, and the State Street subway, are also not included. In May 2012, the CTA started to work on the North Side Main Line stations which includes Jarvis, Morse, Granville, Thorndale, Berwyn, Argyle, and Lawrence. The stations are listed in order, starting at Granville, then Morse, Thorndale, Argyle, Berwyn, Lawrence, and finally Jarvis. This project started in June 2012 and completed in December 2012. This project is also part of the Red Ahead's "Red & Purple Modernization" project.

Wikimedia Commons has media related to Thorndale (CTA) .
This page is based on this Wikipedia article
Text is available under the CC BY-SA 4.0 license; additional terms may apply.
Images, videos and audio are available under their respective licenses.