The main shopping area, named 'The Broadway' – after the road on which it lies – is a parade of retail shops and restaurants, as well as medical and professional practices. [2]

Thorpe Bay railway station is the penultimate station on the London, Tilbury and Southend line served by c2c from London Fenchurch Street (the last being Shoeburyness railway station). [2] Consequently, a large number of London commuters choose to live in Thorpe Bay. Thorpe Bay enjoys good access by bus, provided by Arriva Shires & Essex including the number 1, 4(a), 7, 8 and 9. In 1914, Southend-on-Sea Corporation Tramways' network was extended from Bournes Green to Thorpe Bay. [3] The Tramway closed in 1942 after being superseded by the motorbus. [4]

Thorpe Bay has one of Southend-on-Sea's exclusive and snooty golf courses, the Thorpe Hall Golf Club. [2] Thorpe Bay Bowling Club [5] and Lawn Tennis Club [6] are located in close proximity to each other on the north side of Thorpe Esplanade (the main road along the seafront). As well as these clubs, Thorpe Bay Yacht Club is also situated along the seafront, to the eastern end of Thorpe Bay. [7] These clubs are private organisations open for annual membership. Thorpe Bay does not have a cinema, a theatre or any other major cultural amenities, but leisure organisations, in addition to those already mentioned, include Thorpe Bay Bridge Club, [8] The Rotary Club of Thorpe Bay [9] and a well-equipped fitness gym. [10]

James Duddridge MP, representing the Conservative Party, has been Thorpe Bay's member of parliament since 2005. Thorpe Bay is part of the Thorpe Ward of Southend-on-Sea. The ward currently has three independent councillors. These are Cllr Ron Woodley, Cllr Mike Stafford and Cllr Martin Terry. [11]

Thorpe Bay only has a small number of schools, such as Bournes Green Infants [12] and Junior School, [13] which lies just above the Station Road northern boundary. As well as this, Thorpe Bay contains Thorpe Hall School, a non-selective, coeducational, independent day school. [14] 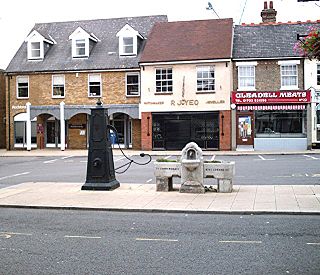 Rochford is a town in Essex, England, 43 miles (69 km) from London and 21 miles (34 km) from Chelmsford, the county town. At the 2011 census, the civil parish, which includes the town and London Southend Airport, had a population of 8,471.

Canvey Island is a town, civil parish and reclaimed island in the Thames estuary, near Southend-on-Sea, in the Castle Point district, in the county of Essex, England. It has an area of 7.12 square miles (18.44 km2) and a population of 38,170. It is separated from the mainland of south Essex by a network of creeks. Lying only just above sea level, it is prone to flooding at exceptional tides and has been inhabited since the Roman conquest of Britain.

Shoeburyness railway station is the eastern terminus of the London, Tilbury and Southend Line, serving the town of Shoeburyness, Essex. It is 39 miles 40 chains (63.57 km) down the main line from London Fenchurch Street via Basildon; the preceding station is Thorpe Bay. Its three-letter station code is SRY. 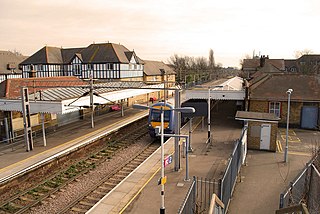 Thorpe Bay railway station is on the London, Tilbury and Southend line, serving the Thorpe Bay area to the east of Southend-on-Sea, Essex. It is 37 miles 73 chains (61.0 km) down the main line from London Fenchurch Street via Basildon and is situated between Southend East and Shoeburyness. Its three-letter station code is TPB. 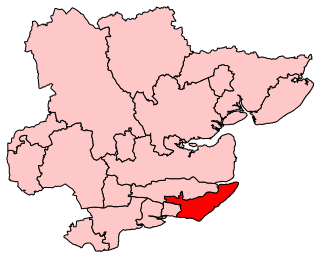 Rochford and Southend East is a constituency represented in the House of Commons of the UK Parliament since 2005 by James Duddridge, a Conservative. 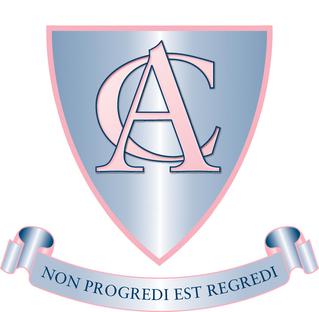 Alleyn Court Prep School is a co-educational day preparatory school in Westcliff-on-Sea, Essex for children up to age 11. 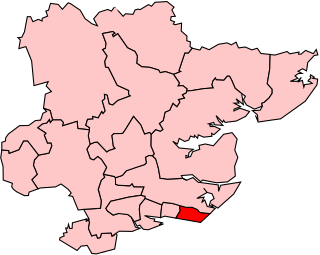 Southend East was a parliamentary constituency in Essex. It returned one Member of Parliament (MP) to the House of Commons of the Parliament of the United Kingdom. 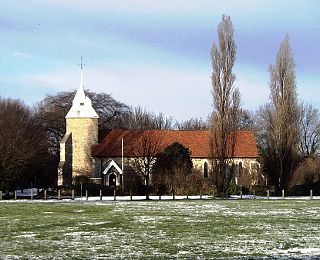 Southend East railway station is on the London, Tilbury and Southend line, serving the Southchurch area to the east of Southend-on-Sea, Essex. It is 36 miles 49 chains (58.9 km) down the main line from London Fenchurch Street via Basildon and it is situated between Southend Central to the west and Thorpe Bay to the east. Its three-letter station code is SOE.

Southchurch Park is a recreational park in the parish of Southchurch, Southend-on-Sea, Essex, England. The park is 12 hectares in area and contains sports pitches, including a cricket ground, formal gardens, a boating lake and a café.

Kursaal is an electoral ward of Southend-on-Sea covering the area east of Southend town centre. It is represented by three local government councillors, each elected to serve a four-year term. Kursaal was one of the four new wards created in 2000 during boundary changes in Southend.