Saint Thraseas (? - 170) was a martyr under the reign of Emperor Marcus Aurelius. Prior to his death he served as Bishop of Eumenia, Phrygia, in Asia Minor.

Eumenia was a titular see of Phrygia Pacatiana in Asia Minor. The city was founded by Attalus II Philadelphus (159-138 B.C.) at the sources of the Cludrus, near the Glaucus, and named after his brother Eumenes. Numerous inscriptions and many coins remain to show that Eumenia was an important and prosperous city under Roman rule. As early as the third century its population was in great part Christian, and it seems to have suffered much during the persecution of Diocletian. [1]

In a synodal letter written by Polycrates of Ephesus about the year 190, he speaks of seven of his relatives who had been bishops before him. Besides these he mentions Polycarp and Papirius of Smyrna, Thraseas of Eumenea, Sagaris of Laodicea and Melito of Sardes (Eusebius, "Hist. Eccles.", v, 24, 2 sq.) [2]

Thraseas was a Quartodeciman Christian leader, in Asia Minor in the second century. Quartodecimans kept Passover on the 14th of Ahib (also known as Nisan), in spite of the preferences of Roman Bishops who preferred a Sunday date which ultimately became Easter Sunday. Eusebius recorded that around 195 A.D. Polycrates of Ephesus, a letter of Polycrates to Pope Victor I regarding the dating of Easter. In the letter Thraseas is mentioned chronologically between Polycarp (155) and Sagaris (under Sergius Paulus, 166–7). The date of Thraseas is therefore about 160. [3] Polycrates mentions that Thraseas was among those who observed the Passover on the date that was handed down from scriptures and the Apostle John, and thus, that he did not change to Sunday when some in Rome did. [4] [5]

Eusebius also wrote that Apollonius of Ephesus spoke in his work of Zoticus, who had tried to exorcise Maximilla, but had been prevented by Themison; and of the martyr-Bishop Thraseas, another adversary of Montanism. [6] [7]

Although he was from Eumenia, Thraseas was, according to Polycrates and Jerome, martyred in Smyrna. [8]

The Life of Polycarp, attributed to St. Pionius, lists Thraseas of Eumenia, as a martyr who was buried at Smyrna. [9] Mention is made of a burial at the cemetery in Smyrna to the cemetery in front of the Ephesian Royal gate, that took place near where recently a myrtle tree sprung up after the burial of the body of Thraseas the martyr. [10] 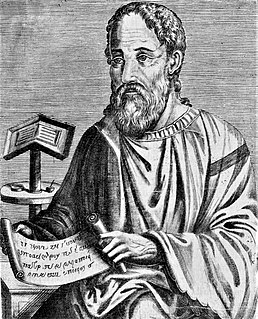 Eusebius of Caesarea, also known as Eusebius Pamphilus, was a Greek historian of Christianity, exegete, and Christian polemicist. In about AD 314 he became the bishop of Caesarea Maritima in the Roman province of Syria Palaestina. Together with Pamphilus, he was a scholar of the biblical canon and is regarded as one of the most learned Christians during late antiquity. He wrote Demonstrations of the Gospel, Preparations for the Gospel and On Discrepancies between the Gospels, studies of the biblical text. As "Father of Church History", he produced the Ecclesiastical History, On the Life of Pamphilus, the Chronicle and On the Martyrs. He also produced a biographical work on Constantine the Great, the first Christian Roman emperor, who was augustus between AD 306 and AD 337. 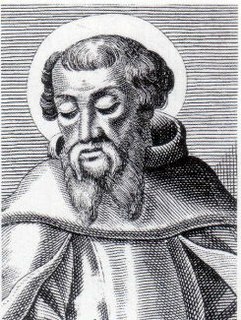 Irenaeus was a Greek bishop noted for his role in guiding and expanding Christian communities in the southern regions of present-day France and, more widely, for the development of Christian theology by combating heresy and defining orthodoxy. Originating from Smyrna, he had seen and heard the preaching of Polycarp, who in turn was said to have heard John the Evangelist, and thus was the last-known living connection with the Apostles. 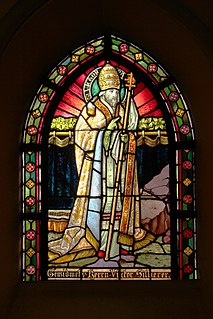 Pope Victor I was the bishop of Rome in the late second century. The dates of his tenure are uncertain, but one source states he became pope in 189 and gives the year of his death as 199. He was the first bishop of Rome born in the Roman Province of Africa—probably in Leptis Magna. He was later considered a saint. His feast day was celebrated on 28 July as "St Victor I, Pope and Martyr".

Polycarp was a Christian bishop of Smyrna. According to the Martyrdom of Polycarp, he died a martyr, bound and burned at the stake, then stabbed when the fire failed to consume his body. Polycarp is regarded as a saint and Church Father in the Catholic, Eastern Orthodox, Oriental Orthodox, Anglican, and Lutheran churches.

Montanism, known by its adherents as the New Prophecy, was an early Christian movement of the late 2nd century, later referred to by the name of its founder, Montanus. Montanism held views about the basic tenets of Christian theology similar to those of the wider Christian Church, but it was labelled a heresy for its belief in new prophetic revelations. The prophetic movement called for a reliance on the spontaneity of the Holy Spirit and a more conservative personal ethic. Parallels have been drawn between Montanism and modern-day movements such as Pentecostalism and the Charismatic movement.

Pope Anicetus was the bishop of Rome from c. 157 to his death in April 168. According to the Annuario Pontificio, the start of his papacy may have been 153. Anicetus actively opposed Gnosticism and Marcionism. He welcomed Polycarp of Smyrna to Rome to discuss the Easter controversy.

Melito of Sardis was the bishop of Sardis near Smyrna in western Anatolia, and a great authority in early Christianity. Melito held a foremost place in terms of bishops in Asia due to his personal influence and his literary works, most of which have been lost. What has been recovered, however, has provided a great insight into Christianity during the second century. Jerome, speaking of the Old Testament canon established by Melito, quotes Tertullian to the effect that he was esteemed as a prophet by many of the faithful. This work by Tertullian has been lost but Jerome quotes pieces regarding Melito for the high regard in which he was held at that time. Melito is remembered for his work on developing the first Old Testament Canon. Though it cannot be determined what date he was elevated to an episcopacy, it is probable that he was bishop during the arising controversy at Laodicea in regard to the observance of Easter, which resulted in him writing his most famous work, an Apology for Christianity to Marcus Aurelius. Little is known of his life outside what works are quoted or read by Clement of Alexandria, Origen, and Eusebius. A letter of Polycrates of Ephesus to Pope Victor about 194 states that "Melito the eunuch [this is interpreted "the virgin" by Rufinus in his translation of Eusebius], whose whole walk was in the Holy Spirit", was buried at Sardis. His feast day is celebrated on April 1.

Christian observance of Passover is found among Assemblies of Yahweh, Messianic Jews, and some congregations of the Church of God. It is often linked to the Christian holiday and festival of Easter. Often, only an abbreviated seder is celebrated to explain the meaning in a time-limited ceremony. The redemption from the bondage of sin through the sacrifice of Christ is celebrated, a parallel of the Jewish Passover's celebration of redemption from bondage in the land of Egypt.

The Audians or Anthropomorphites were a sect of Christians in the fourth century in Syria and Scythia, named after their founder Audius, who took literally the text of Genesis, i, 27 — that God created mankind in his own image.

Polycrates of Ephesus was an Early Christian bishop at Ephesus. Polycrates convened a synod to establish Quartodecimanism as the official position on easter. His letter was written between 186-195ad.

The controversy over the correct date for Easter began in Early Christianity as early as the 2nd century AD. Discussion and disagreement over the best method of computing the date of Easter Sunday has been ongoing ever since and remain unresolved. Different Christian denominations continue to celebrate Easter on different dates, with Eastern and Western Christian churches being a notable example.

Apollonius of Ephesus was an anti-Montanist Greek ecclesiastical writer, probably from Asia Minor.

Saint Sagar or Sagaris was a martyr of the early Christian church. He was supposedly a disciple of St. Paul; it is known that he was Bishop of Laodicea, Phrygia. He suffered martyrdom during the reign of Emperor Marcus Aurelius. Sagar was quoted by Polycrates because he was a quartodeciman.

The Church Fathers, Early Church Fathers, Christian Fathers, or Fathers of the Church were ancient and influential Christian theologians and writers who established the intellectual and doctrinal foundations of Christianity. The historical period in which they worked became known as the Patristic Era and spans approximately from the late 1st to mid-8th centuries, flourishing in particular during the 4th and 5th centuries, when Christianity was in the process of establishing itself as the state church of the Roman Empire.

The Metropolis of Smyrna is an ecclesiastical territory (diocese) of the Ecumenical Patriarchate of Constantinople, modern Turkey. The Christian community of Smyrna was one of the Seven Churches of Asia, mentioned by Apostle John in the Book of Revelation. It was initially an archbishopric, but was promoted to a metropolis during the 9th century. Although the local Christian element was reduced during the 14th and 15th centuries, it retained its ecclesiastical autonomy continuously until 1922. 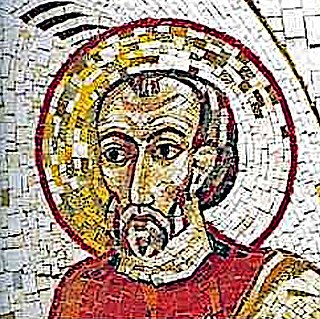 The Martyrdom of Pionius is an account dating from about 250AD to 300 AD of the martyrdom of a Christian from Smyrna named Pionius. It is also known as The Martyrdom of Pionius the Presbyter and His Companions, The Acts of Pionius, and in Latin as Martyrium Pionii or Passio Pionii. Pionius was a presbyter, and was most likely killed between 249 and 251 AD during the rule of the Roman Emperor Decius. The feast day of Saint Pionius is kept on March 11 in Eastern Orthodox churches, and on February 1 in Roman Catholicism.

Papirius of Smyrna was the successor of Polycarp as the bishop of Smyrna. Little information is known about him. He was mentioned by Polycrates of Ephesus, as Papirius defended quartodecimanism against keeping Easter on the Sunday after 14 Nisan. At the end of his life, Papirius experienced martyrdom.