Thrasher is a skateboarding magazine founded in January 1981 by Eric Swenson and Fausto Vitello. [3] The publication consists primarily of skateboard- and music-related articles, photography, interviews and skatepark reviews.

The magazine also maintains a website and YouTube page, which includes segments with names such as "Firing Line" and "Hall of Meat", an online store, a video collection, a radio show, and a forum for registered users. [4] The company also owns and operates the Double Rock indoor skateboarding facility, and the San Francisco skateshop, 66 6th.

Thrasher was founded in 1981 by Fausto Vitello and Eric Swenson, primarily as a way to promote Independent Truck Company, their skateboard truck company. [1] [3] The magazine's first editor was Kevin Thatcher. Mofo became the second staff member, joining Thatcher in mid-1981.

In 1993, Jake Phelps was named editor of the magazine. [5] With him, he brought the punk-skater ethic to the world through his photojournalism, changing the essence of Thrasher, and in turn changing the sub-culture of skateboarding forever. In 1999, the magazine sponsored a PlayStation game called Thrasher Presents Skate and Destroy . [6] Vitello's son, Tony, took over as owner of the magazine after his father died of a heart attack in 2006, and Swenson committed suicide in 2011. [7] [3] On March 14, 2019, long-time editor Jake Phelps passed away. [8] [9]

The magazine's website features regularly updated episodes of segments and hosts a forum in which registered users can engage in online discussion.

Skater of the Year

The title of "Skater of the Year" is awarded annually by Thrasher. The tradition was started in 1990, and the accolade remains one of the most respected awards in global skateboarding culture. The title is bestowed to one skater annually and announced by Thrasher's editor. Chris Cole and Danny Way are the only double recipients.

King of the Road

In 2003, Thrasher started the King of the Road (KOTR) skateboarding competition. In the contest, a group of pre-invited teams of professional skaters are each given a booklet containing a series of challenges. Points are awarded at the completion of each challenge. The teams compete at the same time over a two-week period, in which they travel across the United States to complete as many challenges as possible. In 2011, Thrasher and Converse hosted the competition in China, with the participation of the four biggest Chinese skateboard deck companies. [31]

Thrasher released a music compilation series titled "Skate Rock" under the High Speed Productions label. Skate Rock was conceptualized by Mofo. The first release was in 1983, with Volume One, and continued until Volume Eight in 1990.

The series focused primarily on punk rock and thrash bands, and most of the bands were made up of skateboarders, including well known professionals and community stars such as Steve Caballero, Tony Alva, Bob Denike, Brian Brannon, Mofo, Pushead, Chuck Treece, and Claus Grabke. [34] Of the seven volumes of Skate Rock, all volumes were produced as a cassette available through the magazine. Some volumes were also available as vinyl records.

Thrasher has organized multiple tours throughout the United States and worldwide under the name "Skate Rock". [34] [35]

Arto Saari is a Finnish professional skateboarder and photographer.

Guy Mariano is an American professional skateboarder. Mariano first gained recognition at the age of 14 for his video part in the Blind Skateboards video Video Days (1991).

Deluxe Distribution is an Ermico Enterprises, Inc-owned subsidiary founded in 1986 with limited partner Brian Ware in San Francisco. Deluxe was formed to distribute the Beware Record label, and other small record labels popular with skateboarders, along with Thunder Trucks and Supercush Bushings. Deluxe distributes six skateboard brands and owns DLXSF, a retail outlet.

The title of King of the Road is given out once a year by Thrasher magazine. The tradition was started in 2003 by Thrasher editor Michael Burnett.

Fausto Vitello was an Argentine-American businessman, magazine publisher, and skateboarder. Vitello was the creator of Thrasher magazine and co-creator of Independent trucks.

Tony Trujillo is an American professional skateboarder and musician. Trujillo was awarded the "Skater of the Year" award by Thrasher magazine in 2002.

John Joseph Cardiel is a former professional skateboarder and snowboarder who has been a core member of the AntiHero Skateboards company since it was founded in 1995.

Brandon Westgate is a professional skateboarder.

JFA is an American hardcore punk band formed in 1981, with roots in Arizona and in Southern California skateboard culture. The original members include Brian Brannon (vocals), Don "Redondo" Pendleton (guitar), Michael Cornelius (bass), and Mike "Bam-Bam" Sversvold (drums). Alan Bishop of Sun City Girls also played bass for a time. The band was pivotal in the development of the skate punk and Skate Rock scenes. Over the years, the lineup has included many bass players and drummers but the core of Brannon and Redondo has remained constant.

David González is a Colombian professional skateboarder. In December 2012, he was named Thrasher magazine's "Skater of the Year".

Tyshawn Jones is a regular-footed American skateboarder, winner of the 2018 Thrasher Skater of the Year award. 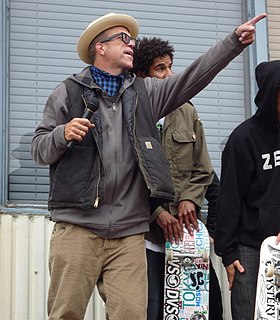 James Kendall "Jake" Phelps was an American skateboarder and magazine editor. Phelps led the magazine Thrasher as editor-in-chief for 27 years.

Phil Shao was a goofy-footed professional skateboarder and journalist from Redwood City, California. Before his death, Shao was to be the next editor-in-chief of Thrasher magazine.

Milton Martinez is a goofy-footed Argentine professional skateboarder. In 2019, Martinez was named Thrasher's Skater of the Year.