"Three Little Words" is a popular song with music by Harry Ruby and lyrics by Bert Kalmar, published in 1930.

The Rhythm Boys (including Bing Crosby), accompanied by the Duke Ellington orchestra, recorded it on August 26, 1930 [1] and it enjoyed great success. [2] Their version was used in the 1930 Amos 'n' Andy film Check and Double Check, with orchestra members miming to it. The film was co-written by Kalmar and Ruby along with J. Walter Ruben. The song also figured prominently in the film Three Little Words , a 1950 biopic about Kalmar and Ruby.

In the mid-1970s the Advertising Council used a fully orchestrated instrumental version of the song in a series of PSAs about seat belt safety; the tag line of these spots was "Seat belts: a nice way to say 'I Love You'."

Between 1977 and 2002, the channel Saeta TV (Channel 10) from Montevideo, Uruguay had it as a musical curtain for the humor program "Decalegrón" (English: Ten Big Joy) [10]

"Too Marvelous for Words" is a popular song written in 1937. Johnny Mercer wrote the lyrics for music composed by Richard Whiting. It was featured in the 1937 Warner Brothers film Ready, Willing and Able, as well as a production number in a musical revue on Broadway. The song has become a pop standard and has been recorded by many artists. 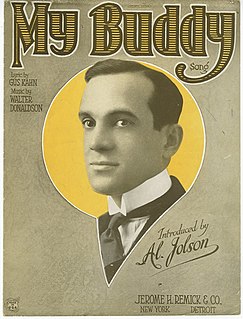 "My Buddy" is a popular song with music written by Walter Donaldson, and lyrics by Gus Kahn. The song was published in 1922 and early popular versions were by Henry Burr (1922), Ernest Hare (1923) and Ben Bernie.

"Dancing in the Dark" is a popular American song, with music by Arthur Schwartz and lyrics by Howard Dietz, that was first introduced by John Barker in the 1931 revue The Band Wagon. The song was first recorded by Bing Crosby on August 19, 1931 with Studio Orchestra directed by Victor Young, staying on the pop charts for six weeks, peaking at #3, and helping to make it a lasting standard.
The 1941 recording by Artie Shaw and His Orchestra earned Shaw one of his eight gold records at the height of the Big Band era of the 1930s and 1940s.

"Day by Day" is a popular song with music by Axel Stordahl and Paul Weston and lyrics by Sammy Cahn. Chart versions in 1946 were by Frank Sinatra ; Jo Stafford; Les Brown; and Bing Crosby with Mel Tormé and His Mel-Tones.

"Hello, Young Lovers" is a show tune from the 1951 Rodgers and Hammerstein musical, The King and I. It is sung by Anna, played by Gertrude Lawrence in the original Broadway production; by Valerie Hobson in the original London West End production; and by Deborah Kerr in the film version.

"South of the Border" is a popular song describing a trip to Mexico, written by Jimmy Kennedy and Michael Carr and published in 1939 for the film of the same name starring country star Gene Autry.

"I Wished on the Moon" is a song composed by Ralph Rainger, with lyrics by Dorothy Parker. Bing Crosby sang the song in The Big Broadcast of 1936.

"I've Got a Crush on You" is a song composed by George Gershwin, with lyrics by Ira Gershwin. It is unique among Gershwin compositions in that it was used for two different Broadway productions: Treasure Girl (1928), when it was introduced by Clifton Webb and Mary Hay, and Strike Up the Band (1930), when it was sung by Doris Carson and Gordon Smith. It was later included in the tribute musical Nice Work If You Can Get It (2012), in which it was sung by Jennifer Laura Thompson. When covered by Frank Sinatra he was a part of Columbia records.

"June in January" is a popular song with music by Ralph Rainger and lyrics by Leo Robin, published in 1934. 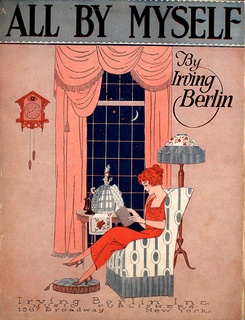 "All by Myself" is a popular song written by Irving Berlin, published in 1921.

"Tumbling Tumbleweeds" is a song composed by Bob Nolan. Although one of the most famous songs associated with the Sons of the Pioneers, the song was composed by Nolan in the 1930s, while working as a caddy and living in Los Angeles. Originally titled "Tumbling Leaves", the song was reworked into the title "Tumbling Tumbleweeds" and into fame with the 1935 Gene Autry film of the same name. Members of the Western Writers of America chose it as one of the Top 100 Western songs of all time.

"Careless Hands" is a popular song written by Carl Sigman and Bob Hilliard, and first recorded in 1948.

Give Me the Simple Life is a 1945 song written by Rube Bloom (music) and Harry Ruby (lyrics). It was introduced in the 1946 film Wake Up and Dream.