Three Rivers Mall is an enclosed shopping mall located in Kelso, Washington that opened in 1987, on the site of a former golf course adjacent to Interstate 5. Previously owned by General Growth Properties, the mall was one of 30 malls that was spun off into Rouse Properties in 2012. Rouse was acquired by Brookfield Properties Retail Group in 2016. In July 2019, Brookfield sold the mall to Arizona-based Three Rivers Village, LLC. [2]

The Kelso Public Library moved its main branch to the mall in 2011. [3]

The mall also has several freestanding businesses: Safeway (originally TOP Food & Drug), Target (opened 1990), and Pier 1 Imports (which closed in 2020 along with the rest of the chain). There are also several freestanding restaurants: Red Lobster, Panera Bread, and Fiesta Bonita Mexican Restaurant. There is one vacant restaurant which was last occupied by Izzy's Pizza, which, according to a Facebook post, closed during 2020 for a remodel, and has not reopened as of August, 2021. [4] Regal Cinemas operated a freestanding theater until January 2015, when it relocated into the main mall.

While the mall opened to great fanfare in 1987, bringing a variety of new stores to the area, as well as the relocation of Sears, JCPenney, and The Bon Marche from nearby downtown Longview, Washington, the mall began to struggle in the early 2000s, starting with the closure of the Emporium chain. A few tenants, such as a used car showroom, a seasonal Halloween store, and a church, occupied the former Emporium for brief periods of time until 2014. The decline in foot traffic prompted many smaller retailers to close, and some chains present in the mall such as Radio Shack, Sam Goody, and KB Toys, were also closed as those chains struggled. The food court also dwindled down to a couple of local tenants. Sears announced late in 2012 [5] that they would close their store in the mall in January 2013, [6] which further reduced foot traffic. Among the businesses that left after Sears closed were Big 5 Sporting Goods, [7] Fred Meyer Jewelers, and Mr. Formal. [8] Chuck E. Cheese's also closed their location inside the mall on April 7, 2014. [9] Macy's announced in January 2017 [10] that the Kelso location is one of 68 stores that would be closing. The store closed in March 2017. As of February 2018, there were no tenants open in the food court, and the food court remained vacant until March 2020.

Sportsman's Warehouse opened in the former Emporium store in July 2014. [11] The former Sears store has been demolished, and Regal Cinemas has constructed a new theater on the former Sears site, which replaced the mall's freestanding theater, as well as the Triangle Cinemas in nearby Longview. The new theater opened in January 2015. [12] The mall's management announced in September 2014 that Planet Fitness will be moving into the former Chuck E. Cheese's site with additional space. [13] Planet Fitness held its grand opening in January 2015. [14] Panera Bread built a new, freestanding location which opened in December 2017. [15] A local business called The Coffee Court opened in the mall's food court in March 2020. This is the first food court tenant in over two years. [16]

An episode of the Food Network show Food Court Wars was filmed in the mall. The episode titled "Gaufre Gourmet vs. Pressed" originally aired on March 30, 2014. [17] The winner of the contest received one year of free rent in the food court, and Gaufre Gourmet opened for business in April 2014. However, citing a lack of foot traffic, Gaufre Gourmet closed in September 2014, and the owners have since opened a restaurant in Portland, Oregon. [18]

Northridge Mall is a shopping mall in Salinas, California, the largest in Monterey County. The single-story structure encompasses 976,913 sq ft (90,758 m2) of retail space and features more than 110 shops, two restaurants, a fast-food court with eight outlets, a Round One Entertainment, and three department stores including Hobby Lobby, JCPenney, and Macy's with one vacant anchor last occupied by Sears. There are approximately 3,000 spaces in the open-air parking lot. 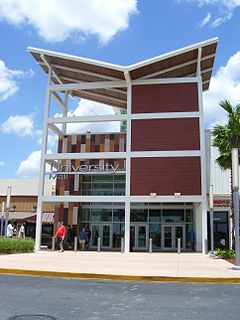 University Mall, previously University Square Mall, is a shopping mall located near the University of South Florida, just north of the city limits of Tampa on Fowler Avenue. The property is located just east of I-275.

Aviation Mall is a major regional shopping mall in Glens Falls North, New York. It serves the extreme northern portion of the Capital District as well as the Glens Falls/Lake George area. The mall has a gross leasable area of 630,000 square feet (59,000 m2). It is owned and managed by The Pyramid Companies. The mall's anchor stores are JCPenney, Dick's Sporting Goods, Regal Cinemas, Ollie's Bargain Outlet, Peter Harris, Target, and Planet Fitness. There is 1 vacant anchor store that was once Sears.

Louis Joliet Mall, formerly known as Westfield Louis Joliet Mall, is a shopping mall in Joliet, Illinois. Its anchor stores are JCPenney, Macy's and a 14-screen Cinemark movie theater along with two vacant anchors last occupied by Carson's and Sears. It also has 3 restaurants: TGI Fridays, Panera Bread Company, and Cajun Boil & Bar. Louis Joliet is a one-level mall with Macy's and JCPenney at one end and the former Bergner-Weise/Carson's and the former Sears at the other end. There is a food court off the main corridor in the center of the mall.

Spring Hill Mall is a shopping mall in West Dundee and Carpentersville, Illinois. The mall's anchor stores are Kohl's and Cinemark. There are 4 vacant anchor stores that were once Carson Pirie Scott, Sears, Macy's, and Barnes & Noble.

Richmond Town Square was a super regional shopping mall known locally as 'Richmond' or 'Richmond Mall,' located in Richmond Heights, Ohio, a suburb of Cleveland, at the intersection of Richmond Road and Wilson Mills Road. Opening September 22, 1966 as Richmond Mall, developed by famous mall developer Edward J. DeBartolo, Sr. Original anchors were Sears and JCPenney, alongside a Loews Theater and Woolworths. The mall included in-line tenants such as Richman Brothers, and Winkelman's. 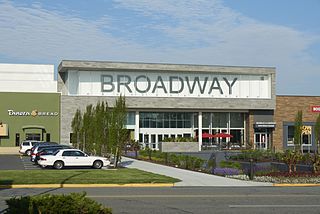 NorthTown Mall is a shopping mall located in Spokane, Washington. The shopping mall first opened in 1955 as an open-air center and has been expanded several times, with its biggest expansion occurring between 1989 and 1991. The mall is currently anchored by Barnes & Noble, Get Air Trampoline Park, J. C. Penney, Kohl's, Marshalls, and Regal Cinemas. 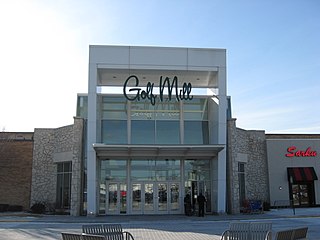 Golf Mill Shopping Center, or simply Golf Mill, is a shopping mall located at 239 Golf Mill Center in Niles, Illinois. The shopping mall has a gross leasable area of 1.1 million square feet (100,000 m2). It is managed by Sterling Retail Services. It borders the intersections of Golf Road, Milwaukee Avenue and Greenwood Avenue. The shopping mall has over 100 specialty shops, three anchor stores, an AMC Theatres, a grocery store, an XSport Fitness gym, and a 9-story office tower and other outparcels. Former anchors included Sears and Roebuck, and Kohl's.

Knoxville Center, originally known as East Towne Mall, was a shopping mall located in North Knoxville, Tennessee. It was in operation from 1984 to January 2020, and was demolished in 2021. 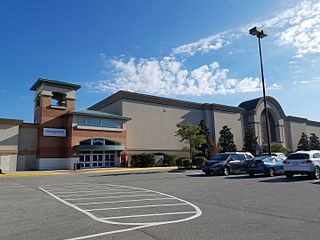 Independence Mall is the only enclosed shopping mall in Wilmington, North Carolina. It opened in 1979 with anchor stores Belk-Beery, JCPenney, and Sears. A later expansion added a new wing and Dillard's store to the center after Westfield Group purchased the mall. The mall is located on Oleander Drive and Independence Blvd east of downtown Wilmington. The mall has a food court and no longer features a carousel. 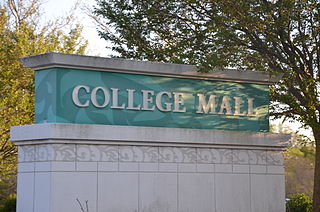 College Mall is a regional shopping mall located in Bloomington, Indiana. This is home to Indiana University's flagship campus. The mall's anchor stores are Dick's Sporting Goods and Target. The mall also features a Fresh Thyme Farmers Market and an Ulta Beauty.

NewPark Mall is a 1,161,681 square feet (107,923.7 m2) super-regional mall in Newark, California. Opened in August 1980, it currently houses 119 stores. It serves the Tri-City area. The mall underwent extensive renovations that were completed in early 2017. Among the additions are a 12-screen AMC movie complex with an IMAX screen and an elaborate new glass-walled restaurant area with views through the entire property.

The Centre at Salisbury is an 862,000-square-foot (80,100 m2) super regional mall in Salisbury, Maryland. The mall is the only regional shopping mall in a 60-mile (97 km) radius. The mall's anchor stores are Boscov's, Burlington, and Dick's Sporting Goods. It also features a 16 screen cinema stadium-style Regal Cinemas movie theater. The Centre at Salisbury is the largest shopping mall on the Eastern Shore of Maryland.

Brookfield Square is a regional shopping mall located in Brookfield, Wisconsin, a suburb of Milwaukee. The mall is located at the intersection of Blue Mound Road and Moorland Road, near Interstate 94. It is managed by CBL & Associates Properties. The anchor stores are JCPenney, Marcus Theatres, and Barnes & Noble. There is 1 vacant anchor store that was once Boston Store.

Regency Mall is an enclosed shopping mall outside of Richmond, Virginia in unincorporated Henrico County, Virginia, United States. Opened in 1975 as Regency Square, the mall features a food court and more than 60 tenants, currently with no anchors. Macy's, which had two locations at Regency Square, closed in spring 2016, Sears closed in summer 2017, and JCPenney closed in fall 2020. Forever 21 closed in early 2020 as part of that brand's restructuring plan. 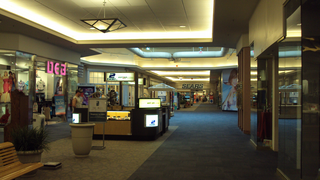 The Mall of Monroe, formerly known as Frenchtown Square Mall, is an enclosed shopping mall in Frenchtown Charter Township in the U.S. state of Michigan. It is located just north of the city of Monroe along North Monroe Street (M-125). Opened in 1988, the mall features more than thirty tenants and a church. The mall is managed by Cafaro Company of Youngstown, Ohio. The mall's anchor stores are Planet Fitness and Phoenix Theatres. There are 5 vacant anchor stores that were once Target, 2 Carson's stores, Sears, and Pat Catan's.

Chesterfield Towne Center is an enclosed shopping mall located in the Richmond, Virginia metropolitan area in unincorporated Chesterfield County, Virginia. It opened in 1975 and features five anchor stores: At Home, JCPenney, Macy's, and a combination TJ Maxx/HomeGoods, with one vacant anchor last occupied by Sears.