Three Sisters may refer to:

This disambiguation page lists articles associated with the title Three Sisters.
If an internal link led you here, you may wish to change the link to point directly to the intended article. 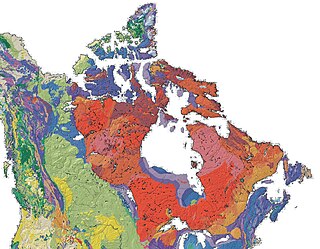 The Canadian Shield, also called the Laurentian Plateau, is a large area of exposed Precambrian igneous and high-grade metamorphic rocks that forms the ancient geologic core of the North American continent. Glaciation has left the area with only a thin layer of soil, through which the composition of igneous rock resulting from long volcanic history is frequently visible. As a deep, common, joined bedrock region in eastern and central Canada, the Shield stretches north from the Great Lakes to the Arctic Ocean, covering over half of Canada and most of Greenland; it also extends south into the northern reaches of the United States. Human population is sparse and industrial development is minimal, but mining is prevalent.

The Rocky Mountains, also known as the Rockies, are a major mountain range and the largest mountain system in North America. The Rocky Mountains stretch 3,000 mi (4,800 km) in straight-line distance from the northernmost part of western Canada, to New Mexico in the southwestern United States. Depending on differing definitions between Canada and the United States, its northern terminus is located either in northern British Columbia's Terminal Range south of the Liard River and east of the Trench, or in the northeastern foothills of the Brooks Range/British Mountains that face the Beaufort Sea coasts between the Canning River and the Firth River across the Alaska-Yukon border. Its southernmost point is near the Albuquerque area adjacent to the Rio Grande Basin and north of the Sandia–Manzano Mountain Range. Being the easternmost portion of the North American Cordillera, the Rockies are distinct from the tectonically younger Cascade Range and Sierra Nevada, which both lie farther to its west.

Yoho National Park is a national park of Canada. It is located within the Rocky Mountains along the western slope of the Continental Divide of the Americas in southeastern British Columbia, bordered by Kootenay National Park to the south and Banff National Park to the east in Alberta. The word Yoho is a Cree expression of amazement or awe, and it is an apt description for the park's spectacular landscape of massive ice fields and mountain peaks, which rank among the highest in the Canadian Rockies. 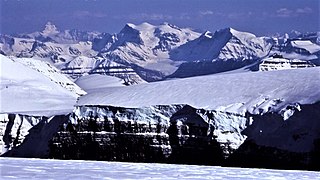 The Canadian Rockies or Canadian Rocky Mountains, comprising both the Alberta Rockies and the B.C. Rockies, is the Canadian segment of the North American Rocky Mountains. It is the easternmost part of the Canadian Cordillera, which is the northern segment of the North American Cordillera, the expansive system of interconnected mountain ranges between the Interior Plains and the Pacific Coast that runs northwest–southeast from central Alaska to the Isthmus of Tehuantepec in Mexico.

The following is an alphabetical list of topics related to Canada.

A pyramid is a structure with triangular lateral surfaces converging to an apex. 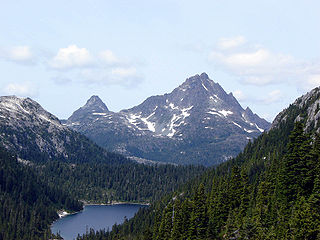 The Golden Hinde is a mountain located in the Vancouver Island Ranges on Vancouver Island, British Columbia, Canada. At 2,195 metres (7,201 ft), it is the highest peak on the island. The peak is popular with experienced backcountry-climbers, having been first ascended in 1913. The mountain is made of basalt which is part of the Karmutsen Formation.

The Three Sisters is a mountain immediately north of Fernie, British Columbia, northwest of the confluence of Fairy Creek with the Elk River. It should not to be confused with the Alberta Rockies' peaks of the same name, located further north outside Canmore.

Temagami, formerly spelled as Timagami, is a municipality in northeastern Ontario, Canada, in the Nipissing District with Lake Temagami at its heart. 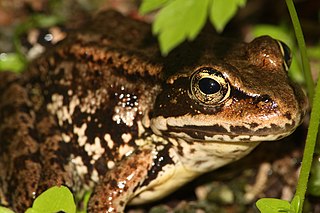 Windows Spotlight is a feature included by default in Windows 10 that downloads pictures and advertisements automatically from Bing and displays them when the lock screen is being shown on a computer running the operating system. Users are occasionally given an opportunity to mark whether they wish to see more or fewer images of a similar type, and sometimes the images are overlaid with links to advertisements. In 2017, Microsoft began adding location information for many of the photographs.