Three Sisters Tavern, sometimes abridged as Three Sisters and nicknamed "Six Tits", [1] was a gay bar and strip club in Portland, Oregon, United States. The bar was founded in 1964 and began catering to Portland's gay community in 1997 following the deaths of the original owners. The business evolved into a strip club featuring an all-male revue. Also frequented by women, sometimes for bachelorette parties, Three Sisters was considered a hub of Portland's nightlife before closing in 2004.

Three Sisters Tavern opened in 1964 as a family business. [2] [3] John P. Katchis and his wife Georgia owned and operated the business until his death four months later (1964) and her death in 1997. [2] [4] The couple were survived by their three daughters, one of whom, Sotiria "Sandra" Katsavopoulos, along with her husband Athanasios "Saki" Katsavopoulos, acquired ownership and began catering to Portland's gay community, eventually turning Three Sisters into a gay bar and strip club. [2] [3] [5]

The bar was located at 1125 Southwest Stark Street and featured an all-male nude revue, a dance floor, and shows. [6] The Portland Mercury described it as an "institution of stiff drinks and stiffer male dancers", [7] where "hot men perform theatrical and acrobatic stripteases on stage, then get naked and wag their penises in your face". [8] Dancers often were costumed as angels, businessmen, construction workers, cowboys, police officers, or United Parcel Service (UPS) delivery men. [8] [9] After Three Sisters closed in 2004, some of the featured dancers began performing at other Portland venues, including Jefferson Theatre. [1]

Three Sisters catered both to gay men and to women, [9] who sometimes attended as part of bachelorette parties. The Oregonian described the "bachelorette bunnies" who used to frequent this bar as well as two others: Silverado and the Viewpoint. The paper's Lee Williams wrote:

Hippoty-hoppity they go – these fuzzy, suburban-soft little critters jump all over Stark Street and the Viewpoint running wild to celebrate one last night of 'Sex in the City' singledom. They crowd downtown's male strip-club stages holding dollar bills up to get a glimpse of a few last carrots before hopping down that wedding-trail home. They are particularly agile small mammals, able to hold a drink and a friend's hair while she's throwing up. [10]

Rufus Wainwright recalled accompanying Thomas Lauderdale, the musician known for his work with the Portland-based band Pink Martini, to the club. [11]

In their book Secret Portland, Oregon: The Unique Guidebook to Portland's Hidden Sites, Sounds and Tastes (2003), Ann Carroll Burgess and Linda Rutenberg called Three Sisters "the hub of Portland's gay bar nightlife", offering a "great" dance floor and "impressive" entertainment. [6] The Portland Mercury's Katie Shimer called the bar "one million percent fun" and said, "Whatever your fetish, the strippers deliver ... Make sure you stuff your pockets with singles, 'cause you'll be spending at least a good hour at the rack." [8] Similarly, the Seattle alternative weekly The Stranger said the venue was "perhaps the funnest place in all the world ... especially when the fellers trot on stage in a vast array of hilarious costumes". The paper's Wm. Steven Humphrey wrote, "These nudie cuties were born to entertain, and prove it by leaping from stage to tabletop, hanging naked upside down (by the tops of their FEET!!), and if you're extremely lucky, gingerly lifting a dollar bill off your forehead with their ass cheeks. Now that's talent!" [9] Byron Beck of Willamette Week said the dancers at Three Sisters "[turned] a quaint queer tavern into the most mouthwatering of watering holes in P-town". [1] The paper also called the club "the best place to view wiener-wiggling". [12]

The Burnside Triangle, also known as Pink Triangle or Vaseline Alley, was a triangular district in Portland, Oregon, United States, known for its relatively higher density of LGBT and gay-friendly businesses. 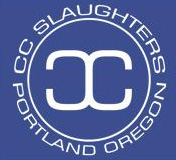 Mary's Club is the oldest strip club in Portland, Oregon, in the United States. In 1954 Roy Keller bought the business from Mary Duerst Hemming, who owned and operated Mary's as a piano bar beginning in the 1930s. Keller initially hired go-go dancers as entertainment during the piano player's breaks, later hiring them full-time because of their popularity. Topless dancers wearing pasties were introduced in 1955. The club also featured comics, musicians, singers and other acts. All-nude dancing began in 1985, after a judicial ruling against City of Portland ordinances banning it in venues which served alcohol.

Lutz Tavern is a bar in the Woodstock neighborhood of Portland, Oregon, in the United States. It was established by the Lutz family in 1947, who maintained ownership until the business was purchased by the Barisich family in 1954. Working-class locals and Reed College students frequent the bar, which is known for popularizing the beer Pabst Blue Ribbon. Lutz closed in 2010 after being run by the Barisich family for 56 years, then re-opened under new ownership and management in 2011. 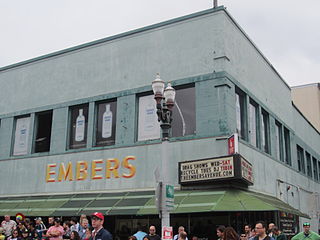 The Embers Avenue, also known as Embers, was a gay bar and nightclub located in the Old Town Chinatown neighborhood of Portland, Oregon, in the United States. Embers hosted a variety of events, including comedy and drag shows, karaoke, and live music. The club opened in 1969, and closed in late 2017. The Oregonian reported in late November 2017 that the building owner has intentions to fill the space with a similar venue. It was speculated in January 2018 that Badlands was expected to open that year.

LGBT culture in Portland, Oregon is an important part of Pacific Northwest culture.

Silverado, formerly known as Flossie's, is a gay bar and strip club in Portland, Oregon's Old Town Chinatown neighborhood, in the United States.

Stag PDX, or simply Stag, is a gay-owned nightclub and strip club in Portland, Oregon's Pearl District, in the United States. The club opened in May 2015 as the second all-nude gay strip club on the West Coast.

Byron Beck is a Portland, Oregon-based journalist and blogger who contributes to national publications, radio and television.

Red Cap Garage, sometimes abridged as Red Cap, was a gay bar and nightclub that operated in Portland, Oregon from 1987 to 2012. The bar was connected to two others called Boxxes and the Brig. It hosted drag queen shows, live music, special events, and viewing parties. In 2012, the bar was sold and closed after operating for 25 years, and the building which housed Red Cap was gutted to make way for the retail alley known as Union Way.

The Dirty Duck building, or Dirty Duck Tavern building, was located at the intersection of Northwest Third Avenue and Glisan Street in Portland, Oregon's Old Town Chinatown neighborhood, in the United States. Originally called the Kiernan Building, the one-story structure earned its nickname from Gail's Dirty Duck Tavern, a gay bar that served as a tenant for 25 years.

Starky's Restaurant and Bar, or simply Starky's, was a gay bar and restaurant in Portland, Oregon's Kerns neighborhood, in the United States. Established in 1984, the venue became a fixture in Portland's gay community before closing in 2015. It hosted LGBT events and served as a gathering space for leather enthusiasts and the Oregon Bears, among other groups. Starky's received a generally positive reception and was most known for its Bloody Marys, brunch, and outdoor seating.

Holocene is a music venue and nightclub in the Buckman neighborhood of Portland, Oregon, in the United States. The venue, which opened in June 2003, is a former auto-parts warehouse with an industrial, modern interior. Holocene hosts a variety of events, and was named the city's "Best Place to Dance" by Willamette Week readers in 2017.

Brix Tavern is a restaurant in Portland, Oregon's Pearl District, in the United States, that serves American cuisine. The 150-seat restaurant was opened in April 2011 by Urban Restaurant Group and offers a menu that includes wood-fired pizzas, rotisserie meats, and other comfort foods. Brix has hosted and participated in special events, and has received a generally positive reception; compliments are most often given for happy hour menu options.

The Bear Paw Inn is a bar and restaurant in Portland, Oregon.

Pearl Tavern was a sports bar and restaurant in Portland, Oregon's Pearl District, in the United States. The restaurant was started by former American football player Joey Harrington, bartender Ryan Magarian, and ChefStable restaurateur Kurt Huffman in December 2016. Intended to be more casual than a steakhouse, the family-friendly Pearl Tavern served various cuts of steak, fried chicken, fish, and risotto, as well as bar snacks and other options for brunch and happy hour. The interior had dark leather booths and multiple widescreen television for sports viewing, and the servers wore plaid. Three percent of profits benefitted Harrington's non-profit organization.

Dixie Tavern is a bar in Portland, Oregon.