The Three Way Independent School District was formed in May 1945 by the consolidation of Goodland Consolidated Independent School District No. 7, Watson Independent School District No. 10, and Wilson Independent County Line School District No. 14. [2] Three Way School was built on a 20-acre (81,000 m2) parcel of land north of Maple. Over the years, several smaller districts - including Stegall (1946) and Bula (1975) – consolidated with Three Way. By the 1994–1995 school year, the district enrolled 127 students. [3] That figure had fallen to 83 by 2001. Faced with declining enrollment and lower funding from the state, Three Way administrators decided that the district would have to consolidate with another larger school district by the start of the next school year. Three neighboring districts – Morton, Muleshoe, and Sudan – were considered for consolidation. A questionnaire was sent to Three Way ISD parents and registered voters to see which of the candidate districts was most favored. Sudan ISD was selected by 57% of Three Way voters and 59% of Three Way parents. [4] Both school boards approved the decision and the issue was put to a vote on February 2, 2002. [5] In the election, Sudan ISD voters supported consolidation by a 190-1 margin. Of the 80 votes cast by Three Way ISD residents, 54 supported the measure with 26 opposed. [6] The merger of Three Way ISD with Sudan became official on July 1, 2002. [7] 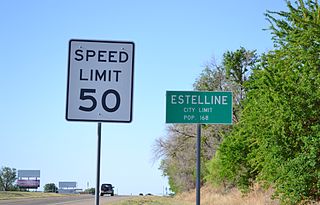 Estelline is a town located in Hall County, Texas, United States. The population in 2010 was 145. The population was estimated at 141 in 2013. In 2012, Estelline was ranked #1 in a National Motorists Association listing of its "Worst Speed Trap Cities" in North America. Estelline often refers to itself as the "Town of Estelline", with a "Town Hall" and a "Town Council", rather than the customary "city" label. However, under Texas law, all incorporated municipalities are considered to be cities. 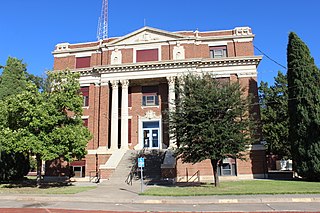 Memphis is a city and the county seat of Hall County, Texas, United States. As of the 2010 census, the population was 2,290.

Lubbock is the 11th-most populous city in the U.S. state of Texas and the county seat of Lubbock County. With a population of 255,885 in 2018, the city is also the 81st-most populous in the United States. The city is in the northwestern part of the state, a region known historically and geographically as the Llano Estacado, and ecologically is part of the southern end of the High Plains, lying at the economic center of the Lubbock metropolitan area, which has a projected 2020 population of 327,424.

The Amarillo Globe-News is a daily newspaper in Amarillo, Texas, owned by Gannett. The newspaper is based at downtown's FirstBank Southwest Tower, but is printed at a facility in Lubbock.

Megargel Independent School District was a school district headquartered in Megargel, Texas (USA). The district had one school called the Megargel School.

Bushland is an unincorporated community in southwestern Potter County, Texas, United States. According to the Handbook of Texas, the community had an estimated population of 130 in 2000. The community is part of the Amarillo, Texas Metropolitan Statistical Area.

Fort Elliott Consolidated Independent School District is a public school district based in the community of Briscoe, Texas (USA).

John True Smithee is an Amarillo attorney who has been since January 1985 a long-term Republican member of the Texas House of Representatives for District 86 in the Texas Panhandle.

Maple is an unincorporated community in Bailey County, Texas, United States. According to the Handbook of Texas, the community had an estimated population of 75 in 2000.

The Caprock Chief or Caprock Xpress was a proposed Amtrak inter-city rail service which would run from Fort Worth, Texas to Denver, Colorado, passing through the Texas Panhandle, which currently does not have passenger rail service of any kind. Initially proposed 2000-2001, the project has not yet seen significant progress and is unlikely to be implemented. "Caprock" is a geological term for a harder or more resistant rock type overlying a weaker or less resistant rock type, and lends its name to the Caprock Escarpment that defines the edge of the high plains of the Llano Estacado. 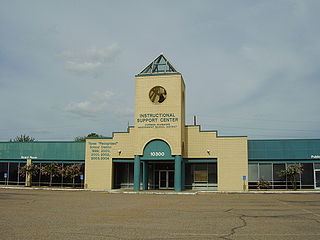 The Cypress-Fairbanks Independent School District is an independent school district with its headquarters in northwest unincorporated Harris County, Texas, United States. Cy-Fair ISD is the largest Recognized school district in the state of Texas with 75 out of 78 campuses receiving an 'Exemplary' or 'Recognized' rating by the Texas Education Agency in 2010.