Thricolema is a genus of leaf beetles in the subfamily Synetinae. It contains only one species, Thricolema anomala, known from the western United States. It is distributed from the state of Colorado to the state of Oregon. The body of an adult is elongated and fibrous. Adults are associated with Calocedrus decurrens . 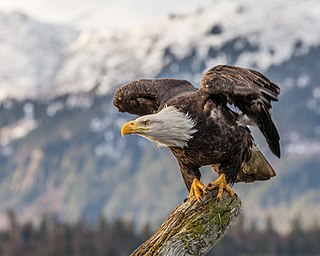 The bald eagle is a bird of prey found in North America. A sea eagle, it has two known subspecies and forms a species pair with the white-tailed eagle. Its range includes most of Canada and Alaska, all of the contiguous United States, and northern Mexico. It is found near large bodies of open water with an abundant food supply and old-growth trees for nesting.

The brown pelican is a North American bird of the pelican family, Pelecanidae. It is one of three pelican species found in the Americas and one of two that feed by diving in water. It is found on the Atlantic Coast from Nova Scotia to the mouth of the Amazon River, and along the Pacific Coast from British Columbia to northern Chile, including the Galapagos Islands. The nominate subspecies in its breeding plumage has a white head with a yellowish wash on the crown. The nape and neck are dark maroon–brown. The upper sides of the neck have white lines along the base of the gular pouch, and the lower fore neck has a pale yellowish patch. The male and female are similar, but the female is slightly smaller. The nonbreeding adult has a white head and neck. The pink skin around the eyes becomes dull and gray in the nonbreeding season. It lacks any red hue, and the pouch is strongly olivaceous ochre-tinged and the legs are olivaceous gray to blackish-gray. 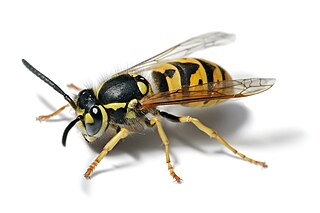 Yellowjacket or yellow jacket is the common name in North America for predatory social wasps of the genera Vespula and Dolichovespula. Members of these genera are known simply as "wasps" in other English-speaking countries. Most of these are black and yellow like the eastern yellowjacket Vespula maculifrons and the aerial yellowjacket Dolichovespula arenaria; some are black and white like the bald-faced hornet, Dolichovespula maculata. Others may have the abdomen background color red instead of black. They can be identified by their distinctive markings, their occurrence only in colonies, and a characteristic, rapid, side-to-side flight pattern prior to landing. All females are capable of stinging. Yellowjackets are important predators of pest insects. 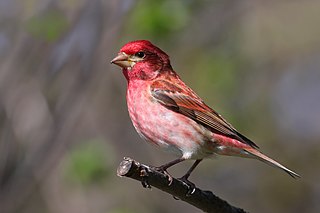 The purple finch is a bird in the finch family, Fringillidae.

The bobolink is a small New World blackbird and the only member of the genus Dolichonyx. An old name for this species is the "Rice Bird", from its tendency to feed on cultivated grains. Adults are 16–18 cm (6.3–7.1 in) long with short finch-like bills and weigh about 1 oz (28 g). Adult males are mostly black with creamy napes and white scapulars, lower backs, and rumps. Adult females are mostly light brown with black streaks on the back and flanks, and dark stripes on the head; their wings and tails are darker. The bobolink breeds in the summer in North America and southern Canada, often wintering in South America. Considered a pest by some farmers, the numbers of these birds are declining and are a species at risk throughout Canada. 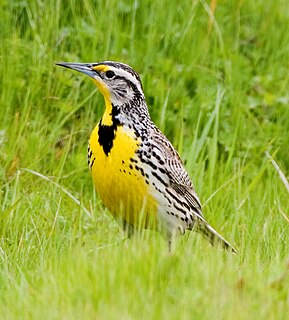 The western meadowlark is a medium-sized icterid bird, about 8.5 in (22 cm) in length. It nests on the ground in open grasslands across western and central North America. It feeds mostly on bugs, but will also feed on seeds and berries. The western meadowlark has distinctive calls described as watery or flute-like, which distinguish it from the closely related eastern meadowlark. It is also the state bird of Wyoming

The Washington ground squirrel is a squirrel found in the Pacific Northwest, in the states of Washington and Oregon of the Northwestern United States. 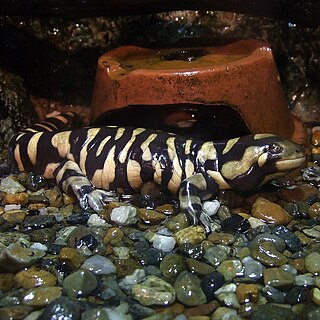 The barred tiger salamander or western tiger salamander is a species of mole salamander found from southwestern Canada in British Columbia, Alberta, Saskatchewan, and Manitoba, south through the western United States to Texas and northern Mexico.

Freshwater fish are those that spend some or all of their lives in fresh water, such as rivers and lakes, with a salinity of less than 1.05%. These environments differ from marine conditions in many ways, the most obvious being the difference in levels of salinity. To survive fresh water, the fish need a range of physiological adaptations.

The Synetinae are a small subfamily within the leaf beetle family (Chrysomelidae). They are found entirely within the Holarctic, mainly in North America but also appearing in parts of Europe and Asia.

The brown marmorated stink bug is an insect in the family Pentatomidae, native to China, Japan, the Korean Peninsula, and Taiwan. In September 1998 it was collected in Allentown, Pennsylvania, where it is believed to have been accidentally introduced. The nymphs and adults of the brown marmorated stink bug feed on over 100 species of plants, including many agricultural crops, and by 2010–11 had become a season-long pest in orchards in the Eastern United States. In 2010, in the Mid-Atlantic United States, $37 million in apple crops were lost, and some stone fruit growers lost more than 90% of their crops.. It is now established in many parts of North America, and has recently become established in Europe and South America.

The northern yellow bat is a non-migratory bat in the family Vespertilionidae, typically active year-round except during abnormally frigid winter weather, during which they will induce torpor. 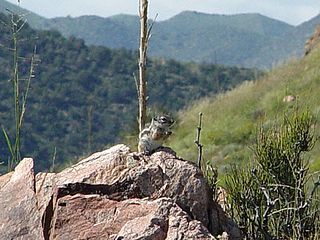 The Texas antelope squirrel is a species of rodent in the family Sciuridae. It is found in Mexico and in both Texas and New Mexico within the United States. 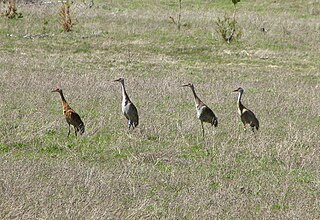 Conboy Lake National Wildlife Refuge is located on the east slope of the Cascade Mountains at the base of 12,281-foot (3,743 m) Mount Adams in southern Washington state.

Xiphopenaeus kroyeri, commonly called the Atlantic seabob, is a commercially important prawn. It is up to 140 mm (5.5 in) long and is the most intensely fished prawn species in the Guianas and along much of the Gulf Coast of the United States.