Thujacorticium is a genus of corticioid fungi in the Cyphellaceae family. The genus, circumscribed by J. Ginns in 1988, [1] contains two species. [2] 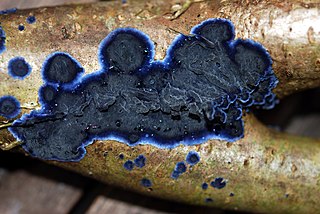 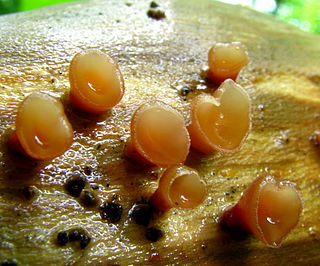 The Cyphellaceae are a family of fungi in the Agaricales order. The family contains 16 genera and, in 2008, 31 species. 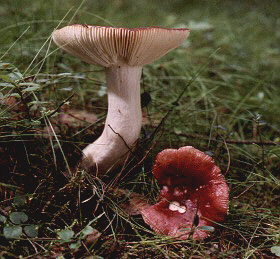 The Hymenochaetales are an order of fungi in the class Agaricomycetes. The order in its current sense is based on molecular research and not on any unifying morphological characteristics. According to one 2008 estimate, the Hymenochaetales contain around 600 species worldwide, mostly corticioid fungi and poroid fungi, but also including several clavarioid fungi and agarics. Species of economic importance include wood decay fungi in the genera Phellinus and Inonotus sensu lato, some of which may cause losses in forestry. Therapeutic properties are claimed for Inonotus obliquus ("chaga") and Phellinus linteus, both of which are now commercially marketed. 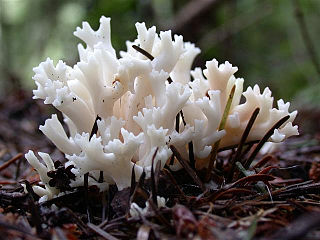 The Clavulinaceae are a family of fungi in the order Cantharellales. The family is not well defined, but currently comprises species of clavarioid fungi as well as some corticioid fungi. These species are nutritionally diverse, some being ectomycorrhizal, others wood-rotting saprotrophs, others lichenized, and yet others lichenicolous.

Filobasidiella is a genus of fungi in the family Tremellaceae. Species are parasitic on other fungi and do not produce distinct basidiocarps. The genus is the teleomorphic (sexual) state of the yeast genus Cryptococcus, some species of which are human pathogens. 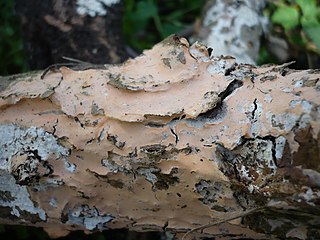 The Corticiaceae are a family of fungi in the order Corticiales. The family formerly included almost all the corticioid fungi, whether they were related or not, and as such was highly artificial. In its current sense, however, the name Corticiaceae is restricted to a comparatively small group of mainly corticioid genera within the Corticiales, though the family is as yet not well defined. 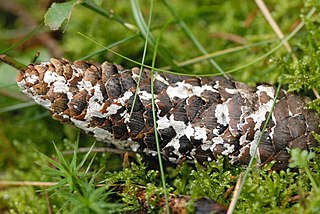 The Atheliaceae are a family composed exclusively of corticioid fungi, placed under the monotypic order Atheliales. Both the order and the family were described by Walter Jülich in 1981. According to a 2008 estimate, the family contains 20 genera and approximately 100 species. However, many genera formerly considered to belong in the Atheliaceae have since been moved to other families, including Amylocorticiaceae, Albatrellaceae, and Hygrophoraceae. Despite being a relatively small group with inconspicuous forms, Atheliaceae members show great diversity in life strategies and are widespread in distribution. Additionally, being a group strictly composed of corticioid fungi, they may also provide insights on the evolution of fruiting body forms in basidiomycetes. 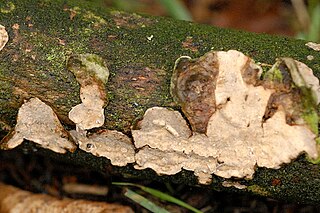 The Phanerochaetaceae are a family of mostly crust fungi in the order Polyporales.

Peniophora is a genus of fungi which are plant pathogens. Members of the genus belong to the class Agaricomycetes, order Russulales, and family Peniophoraceae. The genus is widespread, and contains 62 species. The species of Peniophora are resupinate, or crust-like, and are described as corticioid. A number of its members are parasitised by other fungi. For example, Tremella mesenterica is a parasite to several species of Peniophora.

Amylobasidium is a fungal genus in the family Corticiaceae. It is a monotypic genus, containing the single species Amylobasidium tsugae. First reported by J. Ginns in 1988, it was found growing on wood and in the bark crevices of logs of Tsuga mertensiana from the volcanic peaks in the cordillera of western North America.

Phlebia is a genus of mostly crust fungi in the family Meruliaceae. The genus has a widespread distribution. Phlebia species cause white rot.

Dextrinocystis is a fungal genus in the family Hydnodontaceae. The genus is monotypic, containing the single white rot species Dextrinocystis capitata, found in the Gulf Coast region of the United States. 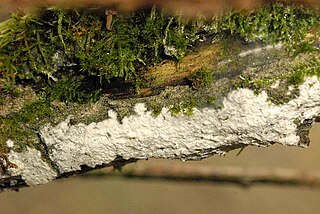 Hyphoderma is a genus of crust fungi in the family Meruliaceae. It was circumscribed by German botanist Karl Friedrich Wilhelm Wallroth in 1833. 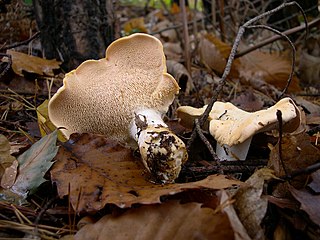 Brunneocorticium is a genus of two fungi in the order Agaricales. It is incertae sedis with respect to familial placement within the order. The genus, described in 2007, contains two corticioid species. 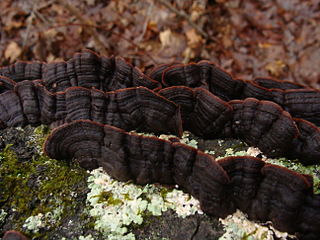 The Punctulariaceae are a family of fungi in the order Corticiales. The family in its current sense is based on molecular research and contains just three genera of corticioid fungi. 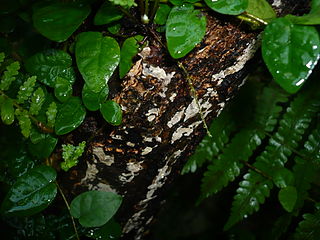 Clavulicium is a genus of corticioid fungi in the family Stereopsidaceae. It was formerly placed in the family Clavulinaceae in the order Cantharellales but was found to belong in a new order along with Stereopsis in 2014. The widespread genus was circumscribed by the French mycologist Jacques Boidin in 1957. The spores and the basidia of species in the genus are similar to those in Clavulina but also similar to those in Stereopsis. Clavulicium globosum is now a species of Stereopsis.

Boreostereum is a genus of corticioid fungi. The genus was circumscribed in 1968 by Erast Parmasto to contain the type species, which was formerly known as Stereum radiatum. Boreostereum has four species that are widely distributed in northern temperate areas. Species in the genus have a dimitic hyphal system, and the hyphae have with brown encrustations that turn greenish when potassium hydroxide is applied. Boreosterum vibrans produces vibralactones, chemical metabolites that inhibit various enzymes. Recent phylogenetic research indicates that Boreostereum is a sister group to the rest of the Gloeophyllales.