Thumper is a rhythm game developed and published by Drool and released in October 2016 on Microsoft Windows and PlayStation 4, with optional virtual reality (VR) support for the Oculus, HTC Vive, and PlayStation VR headsets. It was later released on the Nintendo Switch in May 2017, the Xbox One in August 2017, iOS in January 2018, Oculus Go in September 2018, Android in February 2019, Oculus Quest in May 2019, and Stadia in November 2019. The game was shown at the Experimental Game Workshop during the 2015 Game Developers Conference.

The objective of Thumper is to guide a beetle-like creature along a single or multi-track through a series of unnerving worlds. [1] The player must press a button to hit lit "notes" on the track in time with the background music, while also bracing against obstacles, turning against curved walls, jumping over spikes, and defeating enemies. The game is played in a third-person point of view with an extremely fast scrolling speed.

Each level is broken up into segments. After each segment, the player is given a score and a rating showing how well they performed. The beetle can sustain one hit (a missed turn or crashing into an obstacle), and at certain places it can regain its shield if it is lost. However, taking a second hit without its wing-shield in place will destroy it, and the level starts over at the last checkpoint. The player can repeat the segment as many times as is necessary to beat the level.

Each level in the game features rhythms corresponding to a time signature related to the level number, from 1/2 through to 9/8

A secondary mode, 'Play+', is unlocked for each level after it has been completed. In this mode, the player must progress through the level on one 'life' (though still with the shield allowing one hit to be taken). Dying requires re-starting from the beginning of the level. In addition, the speed increases with the player's score multiplier.

Thumper was developed by the two-man team of Drool, consisting of Marc Flury, the programmer of the game, and Brian Gibson, the bassist for Lightning Bolt, who composed the music and created the artwork for the game. The design of the game was a collaboration between Flury and Gibson. [2]

The game runs on a proprietary engine of Flury's design and has been ported to many different platforms and includes VR support. The game was praised for its rejection of the object-oriented programming paradigm in favor of a procedural programming approach.[ citation needed ] Much of the game's code was organized via a small handful of large files, some of which reached 6000 lines of C++ code. [3]

The Game Critics Awards are a set of annual awards held after the E3 video game conference since 1998. The awards are given to products displayed at E3 with the title Best of E3 of their category. 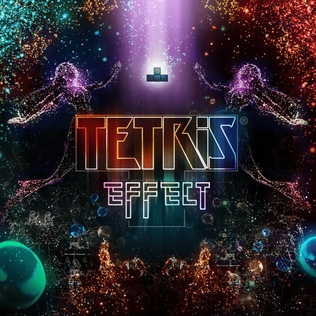 Tetris Effect is a Block-dropping arcade-styled puzzle video game developed by Japanese studios Monstars and Resonair and published by Enhance Games. The game was released worldwide exclusively for the PlayStation 4 on November 9, 2018, and features support for the PlayStation VR. A Microsoft Windows version, with support for Oculus Rift and HTC Vive, was released on July 23, 2019. A version for the Meta Quest standalone VR headset was released on May 14, 2020. The game garnered high praise from critics and was named Game of the Year by several publications. An enhanced version, named Tetris Effect: Connected, was announced for Xbox One, Xbox Series X/S and Windows 10 during Xbox Games Showcase on July 23, 2020, and was released on November 10, 2020. The expansion was made available for existing platforms in August 2021. A Nintendo Switch version was released on October 8, 2021.

Terraria is an action-adventure sandbox game developed by Re-Logic. The game was first released for Windows on May 16, 2011, and has since been ported to several other platforms. The game features exploration, crafting, building, painting, and combat with a variety of creatures in a procedurally generated 2D world. Terraria received generally positive reviews and sold over 44 million copies by 2022, making it one of the best-selling video games.

République is an episodic action-adventure stealth video game developed by Camouflaj and Logan Games and published by GungHo Online Entertainment. The game was originally released for iOS devices but has since expanded to Android, Microsoft Windows and OS X. A PlayStation 4 version, containing all five episodes, was released on March 22, 2016, while a version for the Stadia cloud gaming service was released on September 15, 2020. A VR version debuted on the Oculus Go, followed by a release onto Oculus Quest in July 2019, and Steam on 15 June 2020 and Oculus Go. In June 14, 2021, Camouflaj announced an Anniversary Edition of the game for the Nintendo Switch, PlayStation 4 and PlayStation VR which will release on March 10, 2022.

Superhot is an independent first-person shooter (FPS) video game developed and published by Superhot Team. Though the game follows traditional first-person shooter gameplay mechanics, with the player attempting to take out enemy targets using guns and other weapons, time within the game progresses at normal speed only when the player moves; this creates the opportunity for the player to assess their situation in slow motion and respond appropriately, making the gameplay similar to strategy video games. The game is presented in a minimalist art style, with enemies in red and weapons in black, in contrast to the otherwise white and grey environment.

Crypt of the NecroDancer is a roguelike rhythm video game developed and published by Canadian independent game studio Brace Yourself Games. The game takes fundamental elements of a roguelike dungeon exploration game and adds a beat-matching rhythm game set to an original soundtrack written by Danny Baranowsky. The player's actions are most effective when moving the character set to the beat of the current song and are impaired when they miss a beat, so it is necessary to learn the rhythmic patterns that the various creatures follow. The mixed-genre game includes the ability to import custom music, and the option to use a dance pad instead of traditional controllers or the keyboard. The game was released for Microsoft Windows, OS X, and Linux in April 2015, being co-published by Klei Entertainment, for the PlayStation 4 and Vita in February 2016, for the Xbox One in February 2017, and for Nintendo Switch in February 2018. Crypt of the NecroDancer Pocket Edition, developed for iOS, was released in June 2016. 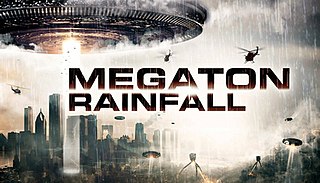 Megaton Rainfall is an action video game developed by Pentadimensional Games for PlayStation 4 and Microsoft Windows. It was released on October 17, 2017 for PlayStation 4 as a timed exclusive and later on November 17, 2017, for Microsoft Windows. It was released on the Nintendo Switch and Xbox One on August 9, 2018. It is also compatible with Sony's virtual reality headset, PlayStation VR, and was made compatible with the Oculus Rift and HTC Vive on August 9, 2018. 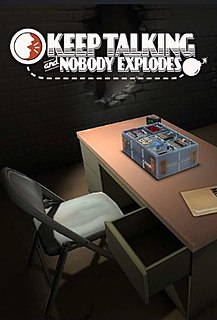 Keep Talking and Nobody Explodes is a puzzle video game developed and published by Canadian studio Steel Crate Games. The game tasks a player with disarming procedurally generated bombs with the assistance of other players who are reading a manual containing instructions. It was designed around virtual reality support, with availability first on Android-driven Samsung Gear VR, with later ports to supported devices on Microsoft Windows, OS X, PlayStation 4, and Linux; though could be played without virtual reality in some cases. An update for the game released in August 2018 removed the virtual reality requirement for these existing systems, as well as included releases for the Nintendo Switch and Xbox One. Non-VR ports for iOS and Android were released in August 2019.

SkyBox Labs Inc. is a Canadian independent video game developer located in Burnaby, British Columbia. Founded in 2011 by Derek MacNeil, Shyang Kong and Steven Silvester formerly from EA Vancouver, they are mostly known for their work with Xbox Game Studios on the Halo, Age of Empires and Minecraft franchises. 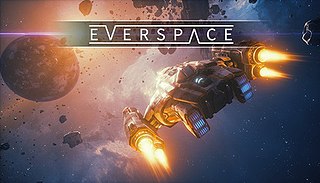 Everspace is a 3D space shooter with roguelike elements developed and published by German studio Rockfish Games. It was released in 2017. A sequel, Everspace 2 is set to be released in 2023. 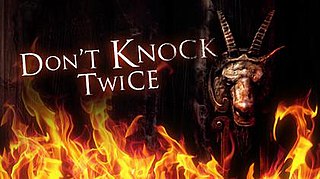 Don't Knock Twice is a first-person survival horror video game developed and published by Wales Interactive. The game is compatible with the PlayStation VR, HTC Vive and Oculus Rift virtual reality platforms. It was released worldwide in September 2017. A version for the Nintendo Switch was released in October 2017. Don't Knock Twice shares the same name as the film and is loosely based on the same story. The player takes the role of a guilt-ridden mother who must save her estranged daughter by uncovering the truth behind the urban tale of a vengeful, demonic witch. 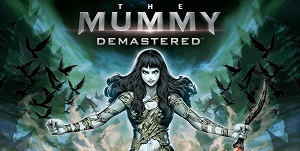 The Mummy Demastered is a Metroidvania video game released in October 2017 by WayForward Technologies based on the 2017 film The Mummy. It takes place concurrently with the events of the film, with players playing Prodigium soldiers under the command of Dr. Henry Jekyll who must fight the evil forces of Princess Ahmanet. The game released for Windows, PlayStation 4, and Xbox One in October 2017. The Nintendo Switch version was released in Japan on July 30, 2020. 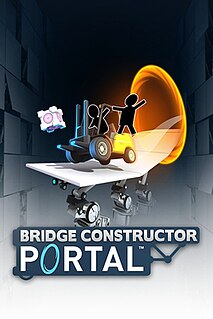 Bridge Constructor Portal is an engineering simulation and puzzle video game developed by ClockStone and published by Headup Games. The game is part of the Bridge Constructor series, and incorporates elements of Valve's Portal series, taking place in Aperture Laboratories. The game was released on Android, iOS, Linux, macOS and Windows in December 2017, and for the Nintendo Switch, PlayStation 4, and Xbox One in February 2018. By August 2018, the game had sold over 500,000 copies.

Just Shapes & Beats is an action rhythm video game developed and published by Canadian indie team Berzerk Studio. It was released on May 31, 2018 for Microsoft Windows and Nintendo Switch, February 24, 2019 for macOS and Linux, May 10, 2019 for PlayStation 4 in the US, and May 30, 2019 for PlayStation 4 in Europe, Russia and Australia. It was also released on June 30, 2020 for Stadia, and on May 31, 2022 for Xbox One and Xbox Series X/S. In this game, players move a colorful shape to the beat of background music and dodge pink shapes. 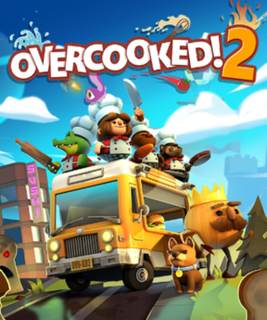 Five Nights at Freddy's: Help Wanted is a 2019 virtual reality survival horror video game developed by Steel Wool Studios and published by ScottGames. It is the eighth main game in the Five Nights at Freddy's series and the ninth installment overall, following Ultimate Custom Night. It presents itself as "The Freddy Fazbear Virtual Experience", produced for the fictitious corporative entity Fazbear Entertainment to help improve its public image after a series of debilitating lawsuits, following several incidents and disasters that allegedly occurred at their various locations.

Trover Saves the Universe is a 2019 action platform game developed and published by Squanch Games for Microsoft Windows, PlayStation 4, Nintendo Switch, Xbox One and Oculus Quest. Envisioned as a comedy game, the title features an optional virtual reality component. Justin Roiland, who was the founder of Squanch Games and the co-creator of Rick and Morty, provided voice work for many characters in this game. It received generally positive reviews upon release. 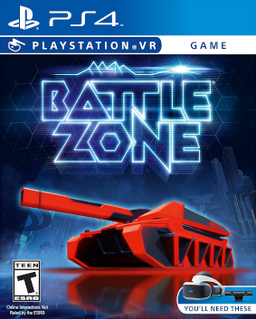 Battlezone is an arcade game released by Rebellion in 2016. It is an update of the original 1980 arcade game. The game was one of the launch titles for PlayStation VR in October 2016.

Chronos is a 2016 action role-playing game developed and published by Gunfire Games for the Oculus Rift virtual reality (VR) headset. The game received generally positive reviews upon release. An overhauled version of the game, titled Chronos: Before the Ashes was released for Microsoft Windows, PlayStation 4, Nintendo Switch, Xbox One and Stadia on December 1, 2020. 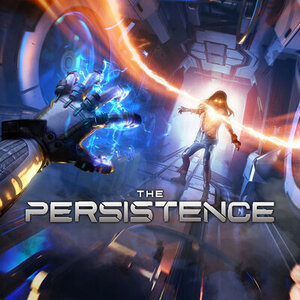