A mysterious beautiful girl Maria (Linda Christian) is discovered unconscious and alone on board a small damaged yacht at sea. Some fishermen including Diego (Carlos Thompson) take Maria back to the nearest coastal Spanish Fishing Village for her to recover and offer to repair her small yacht. While all of the men in the village are infatuated with Maria, the women of the village view her with jealousy and suspicion, saying that she is a curse on their village and blaming her for the recent scarcity of fishing which the village solely relies on for income. When Maria is attacked by a mob of village women tearing her hair and clothes and bruising her, only the local Padre (José Marco Davó) saves her while also reprimanding the village women and telling them that Pablo (Charles Korvin) is the person to blame. The film ends with Maria quietly leaving by setting out to sea in her repaired small yacht with Diego (Carlos Thompson) watching from the small harbor.

In April 1955 it was announced the film would be made by Hemisphere Productions, the company of Mike Frankovich. [2] Filming would take place in London and Spain with Carlos Thompson and Linda Christian starring. Allied Artists were to distribute in the western hemisphere, British Lion in England and Columbia elsewhere. The script was to be by Geoffrey Holmes (the nom de plume for Daniel Mainwaring). [3]

The official producer was Binnie Barnes and Victor Pahlen. [4]

It was John Guillermin's return to features after directing TV for a time. [5]

Charles Korvin was a Hungarian-American film, television and stage actor. He was also a professional still and motion picture photographer and a master chef.

Corazón salvaje is a Mexican telenovela, which was produced by and broadcast on Televisa in 1977. It is the fourth of five screen adaptations of the novel of the same name by Caridad Bravo Adams, and the second telenovela. The first telenovela starred singer Julissa while the 1977 production starred singer Angélica María who had previously had the role of Mónica in the 1968 film version. Actor Ernesto Alonso produced this version and after not casting Julissa and instead repeating Angélica María the first allegedly declared "Since my father (Luis de Llano) is not employed in this company (Televisa) anymore Ernesto Alonso has forgotten me in his castings".

Magic Fire is a 1955 American biographical film about the life of composer Richard Wagner, released by Republic Pictures. 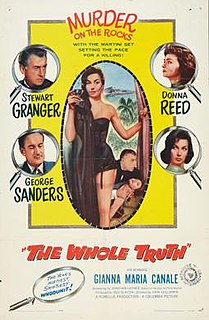 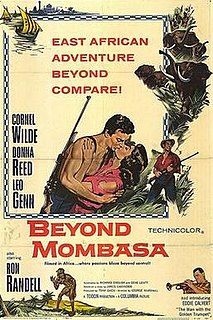 Beyond Mombasa is a 1956 British/American Technicolor adventure film starring Cornel Wilde and Donna Reed. It was directed by George Marshall, set in Kenya and filmed there and at a London studio. 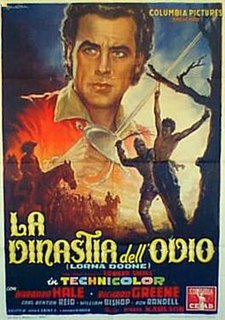 Sangaree is a 1953 American 3-D color period costume drama film by director Edward Ludwig. It was adapted from the 1948 novel of the same name by Frank G. Slaughter.

Pirates of Monterey is a 1947 American Technicolor Western film directed by Alfred L. Werker starring Maria Montez and Rod Cameron. It was the last movie she made for Universal. 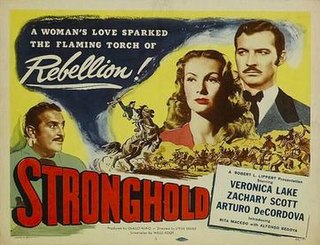 Stronghold is a 1951 American-Mexican Western historical film directed by Steve Sekely and starring Veronica Lake, Zachary Scott and Arturo de Córdova. A separate Spanish version Red Fury was also made. The cost of both films was $519,000.

Mujer con pantalones is a Venezuelan telenovela created by Julio César Mármol and produced by Radio Caracas Television in 2004.