Tarzan Goes to India (1962) is the first film featuring Jock Mahoney as Tarzan. It was written by Robert Hardy Andrews and directed by John Guillermin, who also directed Tarzan's Greatest Adventure . The film also stars Indian Bollywood actors Feroz Khan, Simi Garewal and Murad in pivotal roles. It was followed by Tarzan's Three Challenges (1963) which was set in Thailand. It was one of two Mahoney films that took Tarzan out of Africa and sent him to the Far East. It was a co-production between Switzerland, the United Kingdom and the United States. Jock Mahoney had appeared as the villain in the previous Tarzan film, Tarzan the Magnificent .

Tarzan is called to India to save three hundred elephants, that will be drowned if a dam is opened to create a man-made lake to power an electric plant. Tarzan is pitted against two engineers who ignore the catastrophic results their work will create.

Gordon Scott had played Tarzan for the previous six movies in the series. Don Bragg was reportedly cast as his replacement but injured his foot and was unable to go to India. [1]

Jock Mahoney's casting was announced in December 1961 just as the unit left for India. He was the twelfth actor to play Tarzan, and had just appeared in the previous Tarzan movie, Tarzan the Magnificent, as a villain (he had also auditioned for the role a decade previously as a replacement for Johnny Weissmuller but lost out to Lex Barker). The director was John Guillermin, who had made Tarzan's Greatest Adventure , the first movie in the series produced by Sy Weintraub. [2]

Guillermin later said it was difficult dealing with a dam and elephants. "It's especially difficult when you're making a film for two cents in six weeks," he said. "It really was an absurd bit of business. Technically, we did construct a bamboo wall that was used to charge 50 elephants through. You couldn't stop them for two or three miles. But, we did manage to stop them in a river bed. It was all very exciting." [4]

Guillermin said "I'm not sure why Gordon [Scott] didn't do Tarzan Goes to India, but Jock did a good job. He was an ex-stuntman. Jock was an extremely tough guy." [4]

Mahoney said that Guillermin would regularly abuse him during the shoot.

The poor man got sick, just very ill. He called me some names, things like yellow-bellied son-of-a-bitch. I explained to him that the last guy who talked to me that way got beaten to a pulp. But Guillermin was ill! I had to let many things slide. I was riding an elephant named Mahaveeta. And an elephant, after they're captured, decides whether to live or commit suicide. This one had a tough time getting accustomed to captivity. Whenever we' would do a scene where the guns, beaters and firecrackers were surrounding her, she would be frightened to death and lie down. She would start crying, literally cry. This happened one time when I was beyond a rise and out of camera range. The idea was to lead the elephant over the rise and into camera. Well, Guillermin never saw any of this happening. I came back over the rise and he gave me an improper tongue-lashing. I didn't bother to explain to him what had happened. He was so sick out of his head. The producer, Sy Weintraub, came to me later to apologize. I was ready to leave the picture. I just didn't have to eat that kind of slop. [5]

In August 1962 Hedda Hopper reported the film was "cleaning up" at the box office. [6] Mahoney said ""Metro-Goldwyn-Mayer had just released Mutiny on the Bounty , that three-hour remake. And then came Tarzan Goes to India. Well, oP Tarzan saved Metro's bacon. Mutiny wasn't doing very good at all. They really needed to make the bucks. The picture had all the elements going for it. They even billed me as 'The World's Greatest Stuntman' but in my opinion, Dave Sharpe was the world's greatest." [5]

Filmink said the movie "has two interesting concepts, neither really developed – Tarzan as a stranger in a strange land, and Tarzan is played by someone over 40. However, the action is excellent, the visuals spectacular and Mahoney ideal in the lead." [8]

Warner Bros. released the film on Blu-ray on January 29, 2019 as part of their Archive Collection line. [9] 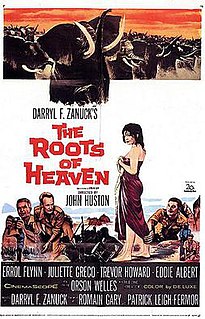 The Roots of Heaven is a 1958 American adventure film made for 20th Century Fox, directed by John Huston and produced by Darryl F. Zanuck. The screenplay by Romain Gary and Patrick Leigh Fermor is based on Romain Gary's 1956 Prix Goncourt-winning novel of the same name. The film stars Errol Flynn, Juliette Gréco, Trevor Howard, Eddie Albert, Orson Welles, Paul Lukas, Herbert Lom and Grégoire Aslan. Huston later said that Roots of Heaven "could have been a very fine film. And largely owing to me was not a good film at all." 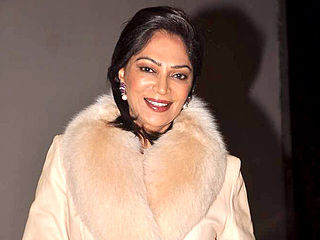 Simi Garewal is an Indian actress, director, producer and a talk show host. She is the recipient of two Filmfare awards and a ITA Award. She is known for her work in Hindi films like Do Badan, Saathi, Mera Naam Joker, Siddhartha, Karz and Udeekaan. She acted in the Bengali movie Aranyer Din Ratri directed by Satyajit Ray. She is also known for her celebrity talk show, Rendezvous with Simi Garewal. 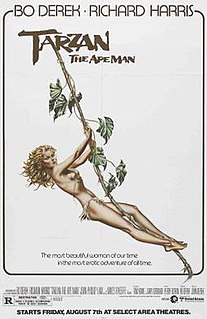 Tarzan, the Ape Man is a 1981 American adventure film directed by John Derek and starring Bo Derek, Miles O'Keeffe, Richard Harris, and John Phillip Law. The screenplay by Tom Rowe and Gary Goddard is loosely based on the 1912 novel Tarzan of the Apes by Edgar Rice Burroughs, but from the point of view of Jane Parker. 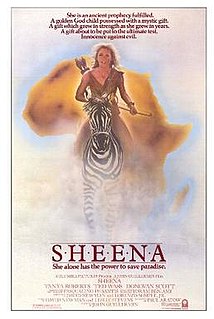 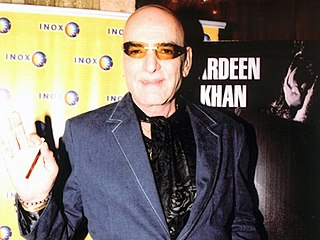 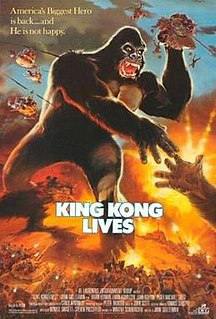 King Kong Lives is a 1986 American monster adventure film directed by John Guillermin. Produced by De Laurentiis Entertainment Group and featuring special effects by Carlo Rambaldi, the film stars Linda Hamilton and Brian Kerwin. The film is a sequel to the 1976 remake of King Kong. 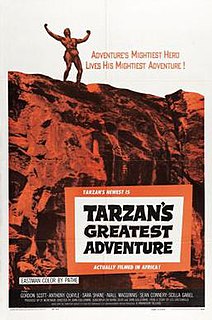 Tarzan's Greatest Adventure is a 1959 Eastmancolor adventure film directed by John Guillermin, produced by Sy Weintraub and Harvey Hayutin, and written by Les Crutchfield, based on the character created by Edgar Rice Burroughs. With a strong supporting cast that included Anthony Quayle and Sean Connery, and a focus on action and suspense, the film won critical praise as a Tarzan film that appealed to adults as well as children. 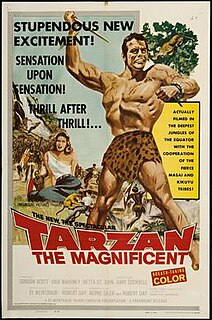 Tarzan the Magnificent is a 1960 British Eastmancolor film, the follow-up to Tarzan's Greatest Adventure (1959). Its plot bears no relation to that of the 1939 Edgar Rice Burroughs novel of the same name. The film was directed by Robert Day and produced by Sy Weintraub and Harvey Hayutin. Gordon Scott made his last appearance as Tarzan in the film, while Jock Mahoney appeared as villain Coy Banton. Mahoney would take over the Tarzan role himself beginning in the next film, Tarzan Goes to India, in 1962. The motion picture does not include Jane. 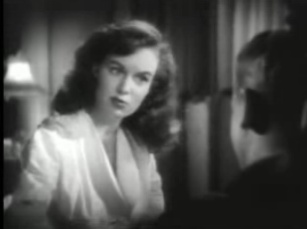 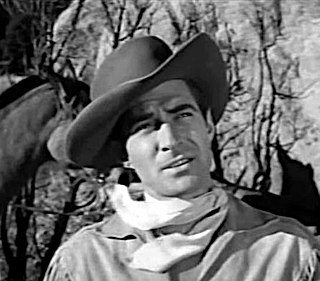 Jacques Joseph O'Mahoney, known professionally as Jock Mahoney, was an American actor and stuntman. He starred in two Action/Adventure television series, The Range Rider and Yancy Derringer. He played Tarzan in two feature films and was associated in various capacities with several other Tarzan productions. He was credited variously as Jacques O'Mahoney,Jock O'Mahoney, Jack Mahoney, and finally Jock Mahoney.

Sy Weintraub was a film and television producer best known for his series of Tarzan films and television episodes between 1959 and 1968. Weintraub broke with the Johnny Weissmuller formula of portraying Tarzan as a pidgin-speaking noble savage who lives in a treehouse with Jane and Boy. Instead, his Tarzan was an educated loner, much closer to Edgar Rice Burroughs's original conception of the character and Boy is replaced by a young orphan named Jai. Weintraub also produced two Sherlock Holmes films for television and was an owner of Panavision. 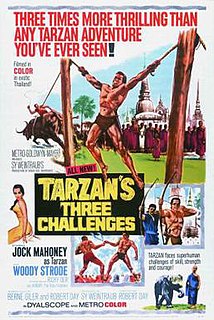 Tarzan's Three Challenges is a 1963 British-American adventure film filmed in Metrocolor. It is a follow-up to 1962's Tarzan Goes to India. The film was Jock Mahoney's second and final turn as the apeman, was produced by Sy Weintraub, written by Robert Day and Berne Giler, and directed by Robert Day. The film was released in June 1963.

Madame X is a 1966 American drama film directed by David Lowell Rich and starring Lana Turner. It is based on the 1908 play Madame X by French playwright Alexandre Bisson.

Gerry Crampton was a British stunt performer and stunt coordinator best known for his work in the James Bond film series.