The Thurston Teal is a family of two- and four-seat all-aluminium amphibious aircraft designed by David Thurston in the United States and first flown in 1968. [1]

The Teal design features a high wing with tip floats for lateral stability. The horizontally opposed engine is mounted tractor fashion in a strut-supported pylon above the wing root. The T-tail includes a water rudder and tailwheel that swings up against the bottom of the rudder. Conventional undercarriage includes flat, spring-steel main undercarriage legs that rotate aft for water landings. The aircraft was designed to be very rugged and simple, with manually operated flaps and landing gear. The conventional (taildragger) configuration was chosen to make beaching the aircraft more practical, with no nosewheel to be damaged when running up on shore. The aircraft may be left floating with the mainwheels extended, to act as fenders to the bottom.[ citation needed ]

Pilot and passenger sit side by side under a clear perspex canopy. Side windows slide up into opening overhead windows.

One unusual characteristic of the Teal design is that it cruises slightly faster with the landing gear in the down position than with it up. The Teal's wheels do not retract, but instead swing to the rear until the gear is horizontal and clear of the water. The drag produced having the landing gear stowed in the up position is higher than in the extended position, and this reduces cruise speed. [3]

David B. Thurston established Thurston Aircraft Corporation at Sandford, Maine, in 1966 to produce a lightweight amphibian of his own design, which had the designation Thurston TSC-1A Teal.

First flown in 1968, production began after certification was gained in August 1969; the 16th and subsequent aircraft, which introduced some refinements, were designated TSC-1A1 Teal. In 1972 David Thurston joined the Schweizer Aircraft Corporation, which continued to build the Teal in the form of the TSC-1A2 Teal II before selling the production rights to the Teal Aircraft Corporation of Markham, Ontario, in early 1976. This last company built a developed TSC-1A3 Marlin before running out of financial steam in early 1979.[ citation needed ]

Before the Schweizer acquisition, Thurston had designed, in conjunction with an aviation magazine, a landplane version designated TSC-2 Explorer, and Marvin Patchen Inc., which financed this development, acquired the production rights for this aircraft, planning to build civil and law-enforcement versions as the Explorer and Observer respectively. Subsequently, Dr Maitland Reed's National Dynamics (Pty) Ltd of Durban, South Africa, acquired this project from Patchen, but later decided not to build either version of this aircraft.[ citation needed ]

The TSC-1 T-Boat was a proposed flying boat. The aircraft was to have no landing gear to save weight and folding wings were to be incorporated to aid storage. The model development was discontinued to concentrate on the amphibious TSC-1A instead. [5]

The TSC-1A was the first to the series to actually be completed and featured retractable conventional landing gear and non-folding wings. The prototype TSC-1A was registered as N1968T, given serial number 1 and was first flown in June 1968. The TSC-1A certified under FAA Type Certificate A15AE on 28 August 1969 at a gross weight of 1,850 lb (840 kg), land and water. An increase in gross weight to 1,900 lb (860 kg) was approved on 9 December 1969. Fifteen Model TSC-1A Teals were built by the Thurston Aircraft. [5]

The TSC-1A1 Teal Amphibian was an improved model with extra range and payload. The aircraft incorporated 23 US gallon fuel tanks in the wing leading edges, which replaced the single 24.5 US gal fuselage tank of the earlier TSC-1A. The gross weight was increased to 2,200 lb (998 kg) (land) and 2,100 lb (953 kg) (water). The prototype TSC-1A, N1968T was upgraded and used as the prototype for the TSC-1A1. The TSC-1A1 was certified on 23 September 1971 and Thurston Aircraft built the first three. Three more were built by Schweizer Aircraft. Six additional existing TSC-1As were upgraded to TCS-1A1 status. [5]

The TSC-1A2 Teal II was a development of the TSC-1A1, It incorporated slotted flaps, a change in horizontal stabilizer incidence and larger elevator trim tab travel. The fitted engine was a 150 hp (110 kW) Lycoming O-320-A3B. The new flaps reduced stalling speed and thus permitted an increase in gross weight to 2,200 lb (1,000 kg) for land and water operations, as well as shorter take off and landing distances. The TSC-1A2 was certified on 28 June 1973, including IFR in non-icing conditions. Schweizer built nine Teal IIs and seven were built by Teal Aircraft as the "Marlin 150". [5]

The TSC-1A3/EWF was a proposed aircraft that would have been identical to the TSC-1A3/EW, except with flaps. [5]

In 1983 there was a proposal to form a new company, to be called Advanced Aircraft, which would develop a tricycle version of the Teal, to be designated the TSC-1A2T. This was to be a conversion of existing TSC-1A2 aircraft. The conversion would have included: [5]

An up-engined version, designated TSC-1A3T, would have been powered by either 160 Lycoming O-320 or Lycoming O-360 180 hp (130 kW) conversion. In the end the company was not formed and the prototype never completed. [5] 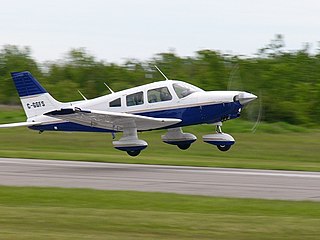 The Cessna 182 Skylane is an American four-seat, single-engined light airplane, built by Cessna of Wichita, Kansas. It has the option of adding two child seats, installed in the baggage area.

The Barrows Bearhawk, now also called the Barrows 4-Place Bearhawk, is an American amateur-built aircraft, designed by Bob Barrows and produced by R&B Aircraft of Fincastle, Virginia, AviPro Aircraft and now Bearhawk Aircraft of Austin, Texas. The aircraft is supplied as a kit or as plans for amateur construction. 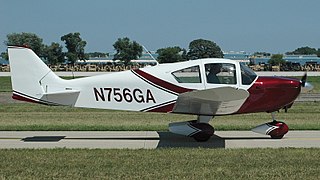 The Zenair Zodiac CH 640 is a Canadian light aircraft that was designed by Chris Heintz and is produced by Zenair in the form of a kit for amateur construction. 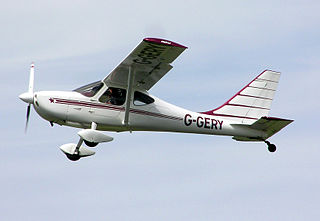 The Glasair GlaStar is an American amateur-built aircraft that was designed by Tom Hamilton and produced by Stoddard-Hamilton Aircraft and later Glasair Aviation. It was first flown in 1994 and was superseded in production by the Glasair Sportsman 2+2 c. 2005. When it was available the aircraft was supplied as a kit for amateur construction.

The Peña Joker and Super Joker are a family of French amateur-built aircraft that were designed by Louis Peña of Dax, Landes and are made available in the form of plans for amateur construction.

The Dakota Cub Super 18 is an American amateur-built aircraft, designed and produced by Dakota Cub of Sioux Falls, South Dakota. The aircraft is supplied as a kit for amateur construction. 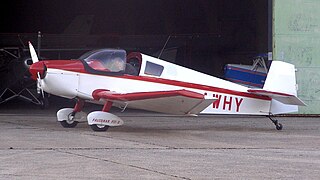 The Falconar F11 Sporty is a Canadian amateur-built aircraft, that was designed by Chris Falconar and produced by Falconar Avia. Falconar supplied it as a kit or as plans for amateur construction. Today both the F11A and E models are available as plans from Manna Aviation. 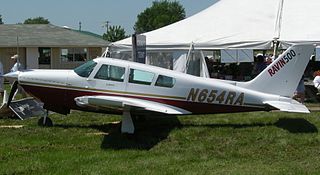 The Ravin 500 is a South African amateur-built aircraft, designed and produced by Ravin Aircraft of Pretoria. The aircraft first flew on 15 September 2002 and is supplied as a kit for amateur construction or as a complete ready-to-fly aircraft.

The Tapanee Levitation 2 is a Canadian STOL amateur-built aircraft, designed and produced by Tapanee Aviation of Mont-Saint-Michel, Quebec. The aircraft is supplied as a kit for amateur construction.

The Explorer Ellipse is an American homebuilt aircraft that was designed by Dean Wilson and produced by Explorer Aviation of Grangeville, Idaho. When it was available the aircraft was supplied as a kit for amateur construction.

The Sea Storm is an Italian homebuilt amphibious flying boat that was designed and produced by Storm Aircraft of Sabaudia. Storm Aircraft was originally called SG Aviation srl. When it was available the aircraft was supplied as a kit for amateur construction.

The Ibis GS-501 Urraco (Magpie) is a Colombian homebuilt aircraft that was designed and produced by Ibis Aircraft of Cali, introduced in 2000. The aircraft is supplied as a complete ready-to-fly-aircraft or as a kit for amateur construction.

The Ibis GS-750 Grand Magic is a Colombian homebuilt aircraft, designed and produced by Ibis Aircraft of Cali, introduced in 2006. The aircraft is supplied as a complete ready-to-fly-aircraft or as a kit for amateur construction.