Thuuz (derived from the word "enthusiast") is a sports discovery service that alerts users to sporting events via a proprietary "excitement rating." [1]

The Thuuz website was launched September 2010 to help sports fans solve the problem of information overload by identifying the best content "...like your buddy who calls and tells you there’s a great game going on," according to Thuuz CEO Warren Packard. [2]

Thuuz attempts to create an objective rating for each game by analyzing live feeds of play-by-play statistics, and measuring six different factors: pace, parity, momentum, social media buzz, novelty, and context. Proprietary algorithms process this data and rate games on a color-coded 0-100 point excitement scale. The score 0-39 is rated as "dull", 40-64 as "OK", 65-84 as "Good" and 85-100 as "Great" with the color becomes darker red as the score increases. Real-time and archived game ratings are displayed. Thuuz also forecasts the ratings for the upcoming games as well. [8]

Thuuz sends registered fans live alerts by SMS text or email, permitting a user to tune into a game of interest. Fans may personalize the sports and leagues they are interested in, list favorite teams, and the level of excitement at which they wish to receive an alert. [9]

Thuuz has teamed with partners such as Dish Network and Google TV to integrate Thuuz ratings with televised sports, helping interactive TV viewers to discover, watch, and record exciting games. [10] [11]

Post-game ratings provide guidance for fans who have recorded multiple events for time-shifted viewing or who wish to watch televised or online replays. Game results are not displayed, so fans can choose the best games to watch without losing the element of suspense, and avoid wasting time on games that turn out to be dull. Thuuz will also suggest the best point in each game to start watching. [12]

Thuuz also employs its algorithms to offer predictions on which upcoming games are anticipated to be most exciting. [13]

By aggregating minute-by-minute excitement ratings over the course of a season, Thuuz generates lists of the most exciting games, teams, leagues [14] performances, and players [15] which offer a different perspective than traditional statistics.

Their sole competitor is Are You Watching This?!. [16] 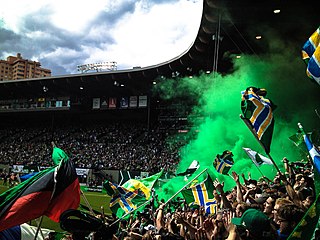 Soccer in the United States is run by different organizations. The United States Soccer Federation governs most levels of soccer in the country, including the national teams, professional leagues, and amateur leagues. The National Collegiate Athletic Association (NCAA) governs colleges and the National Federation of State High School Associations (NFHS) governs schools. The match regulations are generally the same between the three governing bodies although there are many subtle differences.

NFL Sunday Ticket is an out-of-market sports package that broadcasts National Football League (NFL) regular season games unavailable on local affiliates. It carries all regional Sunday afternoon games produced by Fox and CBS. The ideal customer of this package is presumed to be a fan of a team who is unable to see their team on local television because they do not reside in one of that team's markets, or sports bars who want to increase business by attracting fans of out of town teams. The package is distributed in the United States exclusively by DirecTV ; in Canada on streaming service DAZN, in Mexico and Latin America on SKY México, in South America and the Caribbean on Vrio, and several cable providers in The Bahamas and Bermuda.

ESPN Deportes is an American multinational Spanish-language pay television sports channel owned by ESPN Inc., a joint venture between The Walt Disney Company and Hearst Communications. The network is aimed primarily at the Hispanic community in the United States. The channel broadcasts from studio facilities at ESPN's traditional bases of operations in Los Angeles, and Bristol, Connecticut, along with their Mexican base in Mexico City.

Stuart Alistair Holden is an American retired professional soccer player who played as a midfielder, and is currently a lead TV game analyst for Fox Sports. Holden is part of the ownership group for Spanish La Liga soccer club, RCD Mallorca. 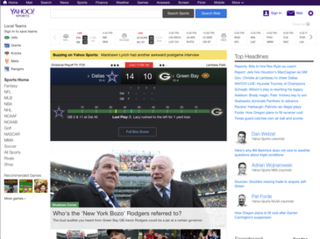 Yahoo! Sports is a sports news website launched by Yahoo! on December 8, 1997. It receives a majority of its information from STATS, Inc. It employs numerous writers, and has team pages for teams in almost every North American major sport. Before the launch of Yahoo Sports, certain elements of the site were known as Yahoo! Scoreboard.

LFCTV is the dedicated official channel for English football club Liverpool F.C. which launched on 20 September 2007. It was formerly offered as part of the Setanta Sports package, but is currently a stand-alone channel.

Luis Arturo Montes Jiménez is a Mexican professional footballer who captains and plays as a midfielder for Liga MX club León. He is popularly known by his nickname "Chapito".

Giovani dos Santos Ramírez is a Mexican professional footballer. A versatile forward, dos Santos can play as an attacking midfielder, winger and secondary striker. He is an Olympic gold medalist. 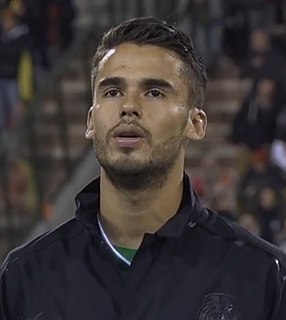 Diego Antonio Reyes Rosales is a Mexican professional footballer who plays as a centre-back for Liga MX club Tigres UANL. He is an Olympic gold medalist.

Jesús Manuel Corona Ruíz is a Mexican professional footballer who plays as a winger or right-back for Primeira Liga club Porto and the Mexico national team.

TUDN (pronounced tu-de-ene; formerly called Univision Deportes Network is an American Spanish language sports channel. Owned by Univision Communications, it is an extension of the company's sports division of the same name. It launched on April 7, 2012, along with Univision Tlnovelas and FOROtv.

Major League Soccer has been broadcast live in the U.S. nationally since the league's inception in 1996 and in Canada since 2007. In the United States the game is broadcast in English on ESPN, ABC, Fox, and Fox Sports 1, in Spanish on Univision Networks. In Canada, MLS is broadcast on TSN and DAZN in English and TVA Sports in French.

FanXT is a fantasy sports site that provides fantasy sports platforms, namely for The Football Association, MotoGP, and Formula One. They are one of the first to develop a fantasy platform for the Premier League which allows users to set up their own leagues and act as commissioners, and the first few that launched a daily fantasy sports platform for football (soccer). They are also the official provider of fantasy platforms for the Finnish Football League, Hong Kong First Division League, I-League, United Football League (Philippines) and S.League. FanXT is supported by the GIST Initiative programme, a partnership led by the U.S. Department of State and implemented by CRDF Global

Are You Watching This?! (RUWT?!) is an Austin, Texas-based Sports Excitement Analytics company that uses algorithms to identify sporting events that viewers would find exciting or compelling. It was founded by Mark Phillip, an African-American MIT Computer Science Major.