Thyatira Presbyterian Church, Cemetery, and Manse is a historic church at 220 White Road off NC 150 in Mill Bridge in Rowan County, North Carolina, ten miles west of the town of Salisbury. Presbyterians have been worshiping at this site since at least 1753. [2] [3]

The current Gothic Revival church building was constructed between 1858 and 1860 and added to the National Register of Historic Places in 1984. The church was originally organized as early as 1753 as Cathey's Meeting Place on its current site on Cathey's Creek. The adjacent cemetery features gravestones dating back to 1755. [4] The church is still in active use, and the congregation is currently affiliated with the Presbyterian Church (USA). [5]

In 1764 Elihu Spencer and Alexander McWhorter, two visiting Presbyterian ministers, carefully selected the name "Thyatira". Mentioned in the Bible in Acts 16:14 and Revelation 1:11 and 2:18-29, Thyatira was one of the seven churches of Asia. This early church had a record of faith, love, and endurance until an evil temptress, Jezebel, led many of the townspeople into disbelief and immorality, and some of the congregation followed their example. By choosing the name Thyatira, the two ministers demonstrated their knowledge of the Scriptures and left a reminder to the congregation. Church members were called to keep their faith in God and to prevent the prevailing materialism of the frontier society from leading them into immorality or infidelity. [7]

The deed for the land on which the church and cemetery are located was made on January 17, 1753. At this time, the land was in Anson County, North Carolina in an area that became Rowan County on March 27, 1753. A copy of the deed is on display in the current church building and reads as follow: [3]

"This Indenture, made the Eighteenth day of January in ye year of our Lord one thousand seven hundred and Fifty Three, between Jno. Lynn of yet County of Anson in the Province of North Carolina, of the one part, And the Congregation Known by Ye Congregation belonging to Ye Lower Meeting house between ye yatkin river & the Cutabo River, adhering to a Minister Licensed From or by a Presbytery belonging to & the old synod of Philadelphia..." (sic)

The deed indicates that there was a congregation prior to the date of the deed. The name was changed by December 1755 to "Cathey's Meeting House". Prior to the American Revolution, the word "church" was reserved for use by the Anglican (Episcopal) Church. [3]

The name of the licensed minister mentioned in the deed is not known. The church evidently was served by itinerant ministers until August 2, 1777 when the Rev. Samuel Eusebius McCorkle was ordained and installed as pastor. Rev. McCorkle was known for his Zion-Parnassus classical school, which was located about a mile from the Church. [3]

During the later part of Rev. McCorkle's pastorate, a split of the congregation between revivalists and non-revivalists occurred in 1805. A revival was sweeping through the area with people shouting, dancing, barking like dogs, swooning and having the "jerks". The congregation was divided on whether this was a true manifestation of the Holy Spirt. Dr. McCorkle believed it was not. Feelings were so strong that 20 or 30 church families, including five elders, left Thyatira to form Back Creek Presbyterian Church on September 6, 1805. [3]

There have been four house of worship buildings at Thyatira. The first building was a log building located above and west of the old part of the church cemetery. Nothing is known about the second building. The third church building was very large and had galleries on three sides. One gallery was reserved for use by slaves. The high pulpit was reached by winding stairs and an ornamental sounding board suspended above the minister's head. The church building that stands in the 21st century is a brick structure and was completed in 1860 and renovated in 1864. [3]

The oldest known graves in the cemetery at Thyatira include: [3]

Graves of notable persons buried at Thyatira include: [3]

The cemetery also contains four pirate tombstones. According to tradition, four pirates from the coast of North Carolina made their way inland and settled in Rowan County and became farmers. They were later identified, convicted and executed. Their burial in the Thyatira cemetery was permitted only if the skull and crossbones, or just the crossbones were used on their gravestones. [3]

Iredell County is a county located in the U.S. state of North Carolina. According to US Census projections in 2018, the population was 178,435. Its county seat is Statesville, and its largest town is Mooresville. The county was formed in 1788, subtracted from Rowan County. It is named for James Iredell, one of the first justices of the Supreme Court of the United States. Iredell County is included in the Charlotte–Concord–Gastonia, NC–SC Metropolitan Statistical Area, as defined in 2013 by the Office of Management and Budget with data from the U.S. Census Bureau.

Joseph Montgomery (1733–1794) was an American Presbyterian minister and a delegate to the Continental Congress from Pennsylvania.

Rev. John Brown was the third president of the University of Georgia. He served in that capacity from 1811 until his resignation in 1816. 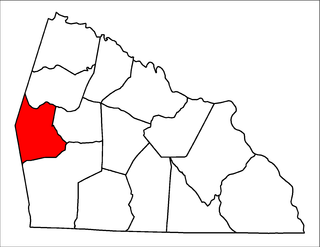 Mount Ulla Township is one of fourteen townships in Rowan County, North Carolina, United States. It is currently the smallest township in Rowan County by population. 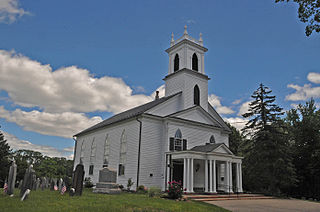 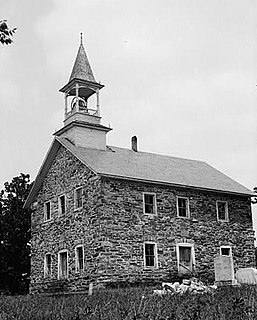 Grace Church is one of the oldest churches in North Carolina, having been organized about 1745 as a Reformed congregation. The current church building dates from 1795.

Third Creek Presbyterian Church and Cemetery is a historic Presbyterian church and cemetery located near Cleveland, Rowan County, North Carolina. The cemetery was added to the National Register of Historic Places in 1983. 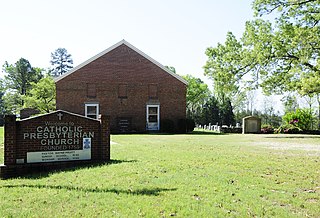 Catholic Presbyterian Church is a historic Presbyterian church in Chester, South Carolina. The church congregation was founded in 1759 and sixty-two men from the church served in the Revolutionary War. Several are buried nearby. The current brick church building, the third located on the same site, was constructed in 1842 and added to the National Register of Historic Places in 1971. 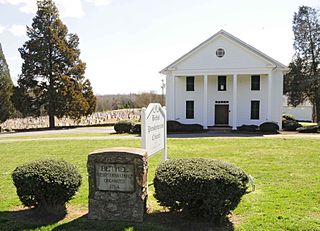 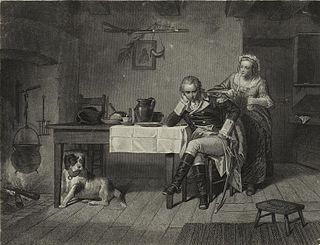 Elizabeth Maxwell Steele was an active supporter of the American Revolution. She helped run a prominent tavern in Salisbury, North Carolina that served as a "resort" for many notable figures of the time. Her involvement with the tavern allowed her to support the Revolution by offering hospitality and charity to other supporters of the American cause. 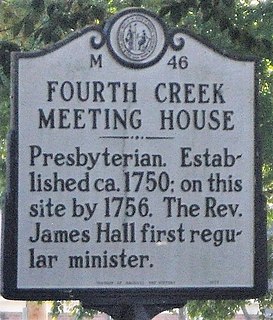 Mill Bridge is an unincorporated town and populated place officially registered as Mill Bridge in 1874. It is located in Mount Ulla Township, Rowan County, North Carolina, United States. The prominent features include the Kerr Mill and Thyatira Presbyterian Church.

Rev. James Hall, D.D. was a Presbyterian minister, chaplain in the Rowan County Regiment during the American Revolution, educator, and missionary in the Natchez area of the Mississippi Territory. He helped to found the Fourth Creek Congregation as its second minister. He was the first minister of Concord Presbyterian Church and Bethany Presbyterian Church in Iredell County, North Carolina on April 8, 1778.