Kalman was born in Budapest and became a U.S. resident in 1956, after he and his family fled Hungary to escape the Soviet invasion, settling in Poughkeepsie, New York. [5] Both of his parents had Jewish ethnic roots, and converted to Catholicism to avoid persecution, so 'Kalman only became aware that he was Jewish at the age of 18'. [6] In 1967, he enrolled in NYU, dropping out after one year of Journalism classes to travel to Cuba to harvest sugar cane and learn about Cuban culture, as a member of the Venceremos Brigade. [5] [7]

In 1971, Kalman returned to New York City where he was hired by Leonard Riggio for a small bookstore that eventually became Barnes & Noble. He later became the creative director of their in-house design department where he created advertisements, store signs, shopping bags, and the original B&N bookplate trademark. [7] [8] In 1979, Kalman - along with Carol Bokuniewicz, and Liz Trovato - started the design firm M & Co., which did corporate work for such diverse clients as the Limited Corporation, the new wave rock group Talking Heads, and Restaurant Florent in New York City's Meatpacking District. [9] He sought to challenge mundane design thinking and aspired to create unpredictable work. [10] Kalman also worked as creative director of Interview magazine in the early 1990s. [5]

By the 1980s, Kalman was known for being 'the 'bad boy' of graphic design' because of his antics and radical consciousness. He believed that award-winning design was only possible when the client was ethical, and frequently called other designers out when he did not agree with their actions. He defined good design as a benefit to everyday life and should be used to increase public awareness of social issues. [10] [11] Kalman adopted a vernacular style as a way to protest corporate International Style which was the primary design style of the time. [8]

Kalman became founding editor-in-chief of the Benetton-sponsored magazine Colors, in 1991. Two years later, Kalman closed M & Co. and moved to Rome, to work exclusively on Colors. [3] Billed as 'a magazine about the rest of the world', Colors focused on multiculturalism and global awareness. This perspective was communicated through bold graphic design, typography, and juxtaposition of photographs and doctored images, including a series in which highly recognizable figures such as the Pope and Queen Elizabeth were depicted as racial minorities. [5] [10]

In 1999, Kalman won the AIGA medal as the 'design profession's moral compass and its most fervent provocateur'. [10]

From 1981 up until his death, Kalman was married to the illustrator and author Maira Kalman.[ citation needed ]

Tibor Kalman: Perverse Optimist, a book about Kalman's work and that with M&Co, was published by Princeton Architectural Press in 1999. [5]

Stefan G. Bucher is an American writer, graphic designer and illustrator. He works through his design studio, 344 Design.

Lucian Bernhard was a German graphic designer, type designer, professor, interior designer, and artist during the first half of the twentieth century.

Herbert F. "Herb" Lubalin was an American graphic designer. He collaborated with Ralph Ginzburg on three of Ginzburg's magazines: Eros, Fact, and Avant Garde, and was responsible for the creative visual beauty of these publications. He designed a typeface, ITC Avant Garde, for the last of these; this font could be described as a reproduction of art-deco, and is seen in logos created in the 1990s and 2000s.

The American Institute of Graphic Arts (AIGA) is a professional organization for design. Its members practice all forms of communication design, including graphic design, typography, interaction design, user experience, branding and identity. The organization's aim is to be the standard bearer for professional ethics and practices for the design profession. There are currently over 18,000 members and 73 chapters, and more than 200 student groups around the United States. In 2005, AIGA changed its name to “AIGA, the professional association for design,” dropping the "American Institute of Graphic Arts" to welcome all design disciplines.

Steven Heller is an American art director, journalist, critic, author, and editor who specializes in topics related to graphic design.

Maira Kalman is an Israeli-born American illustrator, writer, artist, and designer. She is known for her playful and witty illustrations, featured in publications such as The New York Times and The New Yorker, and the children's books that she has both written and illustrated. The urban environment of New York City brings Kalman's creativity to life. She has collaborated with New York institutions, such as The Museum of Modern Art. She has also drawn inspiration from the city's geography and well known landmarks. Her picture book, Fireboat: The Heroic Adventures of the John J. Harvey, can be found in WorldCat library. This book was both written and illustrated by Kalman. It won the annual Boston Globe–Horn Book Award for Nonfiction in 2003.

P. Scott Makela was a graphic designer, multimedia designer and type designer. Among other work, he was especially noted for the design of Dead History, a postmodern typeface that combined features of a rounded sans serif typeface and a crisp neo-classical serif typeface. With the emergence of the personal computer in the mid-1980s, Makela was among the first to explore digital programs such as Photoshop and Adobe Illustrator. As a result, he created an idiosyncratic, original and highly controversial design aesthetic. In particular, his disregard for clean, modernist, problem-solving design agendas—synonymous with contemporary corporate graphic design—caused much debate among powerful, old-guard designers such as Massimo Vignelli, Paul Rand, and Henry Wolf.

Jennifer Morla is a graphic designer and professor.

Alexander Isley is an American graphic designer and educator.

Katherine McCoy is an American graphic designer and educator, best known for her work as the co-chair of the graduate Design program for Cranbrook Academy of Art. 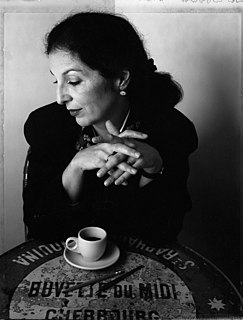 Louise Fili is an Italian-American graphic designer recognized for her elegant use of typography and timeless quality in her design. Her work often draws on inspiration from her love of Italy, Modernism, and European Art Deco styles. Considered a leader in the postmodern return to historical styles in book jacket design, Fili explores historic typography combined with modern colors and compositions.

Gail Anderson is an American graphic designer, writer, and educator.

Emily Oberman is a New York-based multidisciplinary designer and a partner at design studio Pentagram. Formerly, Oberman was a co-founder of design studio Number Seventeen and a designer at Tibor Kalman's studio M & Co..

Janet Froelich is an American graphic designer and creative director.

Anne Quito is a design reporter and architecture critic for Quartz living in New York. She is also the founding director of Design Lab, the in-house design team for Family Health International (FHI). In 2017, Quito won the inaugural Steven Heller Prize for Cultural Commentary from the American Institute of Graphic Arts (AIGA). In 2018 a story she co-authored received a silver medal in the Malofiej Infographic Awards.