The ticto barb or twospot barb (Pethia ticto) is a species of subtropical freshwater fish belonging to the family Cyprinidae. It is a native of the upper Mekong, Salwen, Irrawaddy, Meklong and upper Charo Phraya basins in the countries of Nepal, India, Pakistan, Myanmar, Bangladesh, Thailand, and Sri Lanka. [2] [3] It has frequently been confused with the Odessa barb in the aquarium trade, but in that species the male is reddish-orange (lacking in P. ticto). [4] [5]

The ticto barb is silver and gold with two black spots; one just before the pectoral fin and one near the back tail. It grows to a maximum length of 10 cm (4 in). [3]

It is natively found in still, shallow, marginal waters of lakes and rivers, usually with muddy bottoms. It browses close to the substrate in shallow water. Ticto barbs natively live in a subtropical environment and prefer water with a 6.0—7.0 pH, a water hardness of up to 10 dGH, and a temperature range of 14–22 °C (57–72 °F). [3] Their diet consists of small crustaceans, insects and plankton. [3]

The ticto barb is one of many barbs undergoing revisions in their taxonomic classification. It is frequently confused with its sympatric relative P. stoliczkana .

The ticto barb is an active schooling fish, which is usually kept in groups. When in large enough groups, they will not bother any other species of fish. They prefer a well planted environment that is similar to the still and shallow waters with mud bottoms of their native habitat.

Ticto barbs are egg-layers that spawn among a coarse gravel bed. During spawning, they will lay approximately 150 eggs, laying around 20 at a time. Once spawning is finished, they will usually eat any of the eggs that they find. It is usually necessary to separate the fish from the eggs after spawning in order to prevent the eggs from being eaten. The eggs will hatch in approximately 1 day and will be free-swimming a day later.

Barbodes semifasciolatus, the Chinese barb, is a species of cyprinid fish native to the Red River basin in southeast Asia where they occur in fresh waters at depths of 5 metres (16 ft) or less. The captive variant popularly known as the gold barb or Schuberti barb is an extremely popular aquarium fish.

The rosy barb is a subtropical freshwater cyprinid fish found in southern Asia from Afghanistan to Bangladesh. 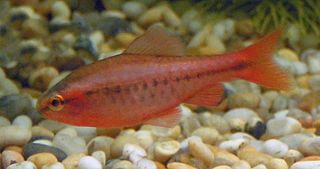 The cherry barb is a tropical freshwater fish belonging to the family Cyprinidae. It is native to Sri Lanka, and introduced populations have become established in Mexico and Colombia. The cherry barb was named Puntius titteya by Paules Edward Pieris Deraniyagala in 1929. Synonyms include Barbus titteya and Capoeta titteya.

The fiveband barb is a species of cyprinid freshwater fish from Southeast Asia. This species is restricted to blackwater streams and peat swamps in northwestern Borneo and possibly Peninsular Malaysia, but it has often been confused with the more widespread, closely related D. hexazona, which is similar except that it lacks the black spot at the rear base of the dorsal fin seen in D. pentazona.

The black ruby barb or purplehead barb is a tropical cyprinid fish endemic to Sri Lanka, where it occurs in forested streams from the Kelani basin to the Nilwala basin. They are found in streams on hills around 1000 ft in elevation. The brightly colored population introduced to Mahaweli at Ginigathena, Sri Lanka, is said to have diminished in number due to the aquarium export trade. 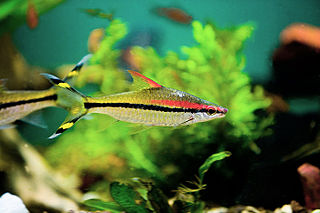 The Denison barb, Denison's barb, Miss Kerala, red-line torpedo barb, or roseline shark is an endangered species of cyprinid fish endemic to the fast-flowing hill streams and rivers of the Western Ghats in India. It is commonly seen in the aquarium trade; pet collection caused it to become endangered and is its single major threat.

The golden barb or golden dwarf barb is a species of cyprinid fish native to inland waters in Asia, and is found in Pakistan, India, and Bangladesh. It has also been introduced to waters in Colombia. It natively inhabits rivers, and standing water with a silty bottom. They live in a tropical climate in water with a 6.0 - 6.5 pH, a water hardness of 8 - 15 dGH, and a temperature range of 68 - 77 °F. It feeds on benthic and planktonic crustaceans, and insects. This species can grow in length up to 5.1 centimetres (2.0 in) TL. It can also be found in the aquarium trade.

The Malabar danio is a tropical fish belonging to the minnow family (Cyprinidae). Originating in Sri Lanka and the west coast of India, the fish has been circulated throughout the world through the aquarium fish trade. It grows to a maximum length of 6 in (15 cm) rarely exceeds 4 in (10 cm) in a home aquarium.

The Arulius barb is a tropical cyprinid fish native to the Kaveri River basin of south east India. Other common names include Tamiraparani barb, Silas barb and longfin barb.

Barbodes binotatus, commonly known as the spotted barb or common barb, is a tropical species of cyprinid fish native to Southeast Asia. It has also become established as an exotic species in Palau and Singapore.

The swamp barb or chola barb, Puntius chola, is a tropical freshwater fish belonging to the subfamily Cyprininae of the family Cyprinidae. It originates in inland waters in Asia, and is found in Pakistan, India, Nepal, Bangladesh, Sri Lanka, Bhutan, and Myanmar. Puntius brevis is also sometimes known as swamp barb.

The spottedsail barb, dwarf barb, phutuni barb, or pygmy barb is a tropical freshwater fish belonging to the subfamily Cyprininae of the family Cyprinidae. It originates in inland waters in Asia, and is found in Pakistan, India, Bangladesh, and Myanmar.

The onespot barb or Teri barb is a tropical freshwater fish belonging to the Cyprininae sub-family of the family Cyprinidae. It originates in inland waters in Asia, and is found in Pakistan, India, Bangladesh, Myanmar. It was originally described as Cyprinus terio by Dr. Francis Buchanan-Hamilton in 1822, and has also been referred to in scientific literature as Systomus terio or Barbus terio. 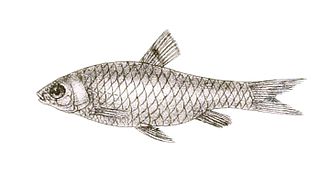 The greenstripe barb, silver barb or striped barb is a tropical freshwater and brackish fish belonging to the subfamily Cyprininae of the family Cyprinidae. It originates in inland waters in Asia, and is found in Pakistan, India, and Sri Lanka.

The pool barb, spotfin swamp barb, or stigma barb is a tropical freshwater and brackish fish belonging to the Puntius genus in the family Cyprinidae. It is native to inland waters in Asia and is found in India, Nepal, Bangladesh, Myanmar, Bhutan, Afghanistan, Pakistan and Yunnan, China.

Pethia cumingii, known as the Cuming's barb or the two spot barb, is a species of cyprinid fish endemic to Sri Lanka. 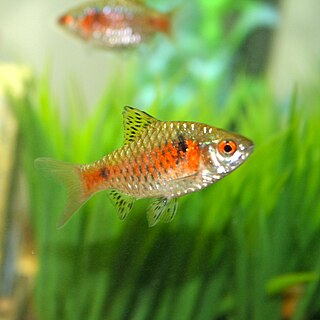 The Odessa barb is a species of cyprinid fish known from Central Myanmar, where it is known to occur in an artificial pond above the Anisakan Falls and also from the lower Chindwin River. For many years it has been known to the aquarium hobby, where it has frequently been confused with the less colourful ticto barb), but it was only described scientifically in 2008.