Thacker was born in and grew up in Covington, Kentucky across the Ohio River from Cincinnati, the son of William and Velma Arvin Thacker. He attended Our Savior's High School until integration closed it in 1956. [1] He then attended the all-black William Grant High School, where he played basketball. He averaged 31.7 points per game as a junior and led the team to a 26–5 record. As a senior, he averaged 33.8 points as the team went 31–7. [2] He scored 36 points in his final high school game as the team lost the Kentucky state championship game, 85–84. [3]

In 1959 he needed a few credits to earn his degree, so he attended Holmes High School during the summer and graduated. [1]

Thacker attended the University of Cincinnati and played three varsity seasons for the Bearcats under coach Ed Jucker. As a sophomore in 1960–61, he averaged 12.3 points per game and was named All-Missouri Valley Conference (MVC) as the Bearcats won the league title. [4] The Bearcats finished the season with a record of 27–3 and, on March 25, 1961, Cincinnati, led by the balanced attack of Thacker, Bob Wiesenhahn, Tony Yates, Paul Hogue and Carl Bouldin, [4] won the NCAA Championship with a 70–65 overtime win over the Ohio State Buckeyes. [4]

As a senior in 1962–63, he averaged 15.8 points per game, led the team in assists with 4.0 per game, [4] and was named the team MVP. [4] He was also named All-MVC for the third consecutive season. [4] In addition, he was a consensus first-team All-American along with teammate Bonham. [4] The Bearcats, with the same starting lineup as the year before except for Larry Shingleton replacing the departed Hogue, won the league crown yet again and, for the third straight season, advanced to the NCAA championship game. However, on March 23, 1963, the Bearcats lost to Loyola University Chicago. [4]

Thacker was chosen in the first round (fifth overall) of the 1963 NBA draft as a territorial pick by the Cincinnati Royals. During his three seasons with the Royals, he played about nine minutes per game as a backup guard, averaging 2.8, 2.5, and 3.7 points per game, respectively during the 1963–64 through 1965–66 seasons. [5] On May 1, 1966 he was drafted by the Chicago Bulls in the NBA expansion draft, but he decided to retire and did not play that season.

On August 4, 1967, he returned to the NBA and was signed as a free agent by the Boston Celtics. It turned out to be a fortuitous trade for Thacker. Averaging about 12 minutes per game and 4.2 points and 2.5 rebounds per game, he earned a championship ring as the Celtics won the NBA title in a six-game finals series over the Los Angeles Lakers. [6] He also posted a career single-game high of 17 points twice, on February 11, 1968 against the Lakers and again on March 7 against the Bulls. [7]

After Thacker's fourth NBA season, on May 6, 1968, he was drafted by the Milwaukee Bucks in the NBA expansion draft. [5] However, he opted to play in the American Basketball Association (ABA) for the Indiana Pacers. In 1968–69, playing just 18 games, he averaged 5.4 points, 3.7 rebounds and 2.9 assists per game, all career personal bests. In 1969–70, he played 70 games, averaging 2.7 points per game and helped the Pacers capture the ABA championship [8] in six games over the Los Angeles Stars. In his third and final ABA season of 1970–71, he played eight games and his seven-year professional career ended. [5]

He became the first African-American coach at the University of Cincinnati, leading the women's basketball program from 1974 to 1978. [9] Thacker was the second coach for the Cincinnati Bearcats women's basketball team and would go on to have an 55–43 record over four seasons, leading three winning campaigns during his coaching time.

Thacker earned both a bachelor's degree and a master's degree from the University of Cincinnati. [1] He is also a member of the Beta Eta chapter of Kappa Alpha Psi fraternity.

He was inducted into the Ohio Basketball Hall of Fame at the 11th Annual Ceremony on May 21, 2016 in Columbus.

Oscar Palmer Robertson, nicknamed "the Big O", is an American former professional basketball player who played for the Cincinnati Royals and Milwaukee Bucks in the National Basketball Association (NBA). Robertson played point guard and was a 12-time All-Star, 11-time member of the All-NBA Team, and one-time winner of the MVP award in 14 seasons. In 1962, he became the first player in NBA history to average a triple-double for a season. In the 1970–71 NBA season, he was a key player on the team that brought the Bucks their first NBA title. His playing career, especially during high school and college, was plagued by racism.

Frank Vernon Ramsey Jr. was an American professional basketball player and coach. A 6-3 forward/guard, he played his entire nine-year (1954–1964) NBA career with the Boston Celtics and played a major role in the early part of their dynasty, winning seven championships as part of the team. Ramsey was also a head coach for the Kentucky Colonels of the ABA during the 1970–1971 season. Ramsey was inducted into the Naismith Basketball Hall of Fame in 1982.

Clifford Oldham Hagan is an American former professional basketball player. A 6-4 forward who excelled with the hook shot, Hagan, nicknamed "Li'l Abner", played his entire 10-year NBA career (1956–1966) with the St. Louis Hawks. He was also a player-coach for the Dallas Chaparrals in the first two-plus years of the American Basketball Association's existence (1967–1970). 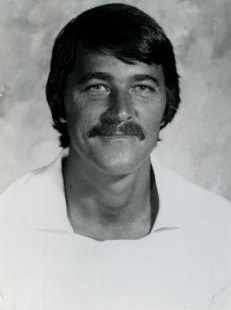 Clarence Glover is a retired American National Basketball Association (NBA) player, who played in college at Western Kentucky (1968–1971). Glover was a forward at 6'8" and 210 lb. 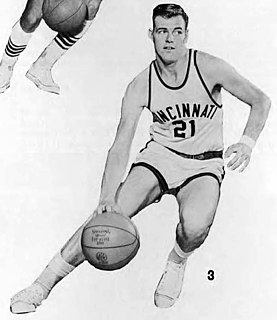 Ronald D. Bonham was an American professional basketball player. He won two NBA championships with the Boston Celtics and a college national title at the University of Cincinnati. 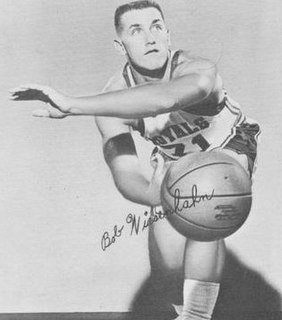 The Cincinnati Bearcats men's basketball program represents the University of Cincinnati in Cincinnati, Ohio. The school's team competes in NCAA Division I as part of the American Athletic Conference though they will move to the Big 12 conference within the next few years. The Bearcats are currently coached by Wes Miller.

Carl Edward Bouldin is an American former Major League Baseball pitcher who also played college baseball and college basketball for the University of Cincinnati, where he was a member of the NCAA Championship-winning 1960–61 Cincinnati Bearcats men's basketball team. He played in an NCAA national championship game and in Major League Baseball the same year. Bouldin was listed as 6 feet 2 inches (1.88 m) and 180 pounds (82 kg); in baseball, he was a switch hitter who threw right-handed.

Ralph E. Davis Jr. was an American professional basketball player who played two seasons in the National Basketball Association (NBA) and was a starter on two NCAA Final Four teams at the University of Cincinnati.

The 1963 NCAA University Division Basketball Championship Game was the final of the 1963 NCAA University Division Basketball Tournament and determined the national champion in the 1962–63 NCAA University Division men's basketball season. The game was held on March 23, 1963, at Freedom Hall in Louisville, Kentucky. The matchup pitted the Loyola Ramblers, who were making their first NCAA Tournament appearance, against the Cincinnati Bearcats, the two-time defending national champions. After trailing by 15 points in the second half, Loyola rallied to force an overtime period, and won the game 60–58 on a basket by Vic Rouse with one second left. The Ramblers earned their first championship in men's college basketball.

Jacob Evans III is an American professional basketball player for the Santa Cruz Warriors of the NBA G League. He played college basketball for the Cincinnati Bearcats. As a junior in 2018, he earned first-team all-conference honors in the American Athletic Conference (AAC). He was selected by the Golden State Warriors in the first round of the 2018 NBA draft with the 28th overall pick.

Jarron Cumberland is an American professional basketball player for the Delaware Blue Coats of the NBA G League. He played college basketball for the Cincinnati Bearcats.