Like the other studios, MGM reissued and edited its cartoons when rereleased to theaters. Many pre-1952 cartoons were reissued with Perspecta Sound, which was introduced in 1954. MGM also reissued its cartoons before the introduction of Perspecta Sound. Because of the 1965 MGM vault fire, all original film of pre-September-1951 MGM cartoons are lost, but luckily the backup prints is still (in spite of the altered reissue prints), although some production artwork relating to the missing material has survived, like pencil sketches. [2]

The following thirteen cartoons were directed by Gene Deitch, produced by William L. Snyder, and animated at Snyder's Rembrandt Films in Prague, Czechoslovakia (now in the Czech Republic, and Slovakia). All cartoons were released to theaters by Metro-Goldwyn-Mayer.

The following 34 cartoons were produced by Chuck Jones in Hollywood, California. Earlier cartoons were produced in conjunction with Walter Bien's "Sib Tower 12 Productions" (one or the other credited on the 1963 and 1964 productions), until it was integrated into a new animation department called MGM Animation/Visual Arts. Directors (if other than Jones) or co-directors for each short are listed. All cartoons were released to theaters by Metro-Goldwyn-Mayer. Note: All the Chuck Jones MGM Tom and Jerry shorts were in Metrocolor.

All were released on DVD in 2009 as part of Tom and Jerry: The Chuck Jones Collection .

Spin-offs and other appearances 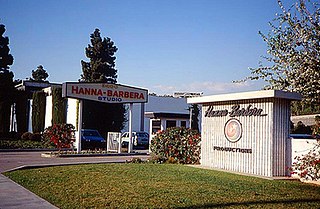 Hanna-Barbera Cartoons, Inc. was an American animation studio and production company that produced animated and live-action programming until 2001. It was founded on July 7, 1957, by Tom and Jerry creators and former MGM cartoon studio staff William Hanna and Joseph Barbera. 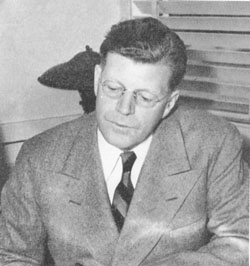 Frederick Clinton Quimby was an American animation producer and journalist best known for producing the Tom and Jerry cartoon series, for which he won seven Academy Awards for Best Animated Short Film. He was the film sales executive in charge of the Metro-Goldwyn-Mayer cartoon studio, which included Tex Avery, as well as William Hanna and Joseph Barbera, the creators of Tom and Jerry. 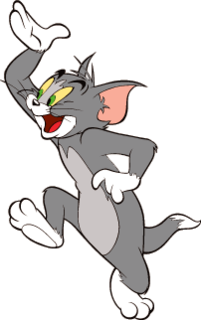 Thomas Jasper "Tom" Cat Sr. is a fictional character and one of the two titular main protagonists in Metro-Goldwyn-Mayer's series of Tom and Jerry theatrical animated short films. Created by William Hanna and Joseph Barbera, he is a grey and white anthropomorphic domestic short haired mute tuxedo cat who first appeared in the 1940 MGM animated short Puss Gets the Boot. The cat was known as "Jasper" during his debut in the short; however, beginning with his next appearance in The Midnight Snack he was known as "Tom" or "Thomas".

Droopy is an animated character from the golden age of American animation. He is an anthropomorphic white Basset Hound with a droopy face; hence his name. He was created in 1943 by Tex Avery for theatrical cartoon shorts produced by the Metro-Goldwyn-Mayer cartoon studio. Essentially the polar opposite of Avery's other MGM character, the loud and wacky Screwy Squirrel, Droopy moves slowly and lethargically, speaks in a jowly monotone voice, and—though hardly an imposing character—is shrewd enough to outwit his enemies. When finally roused to anger, often by a bad guy laughing heartily at him, Droopy is capable of beating adversaries many times his size with a comical thrashing. 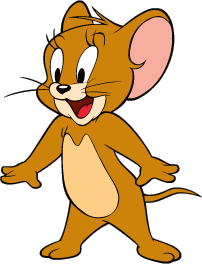 Gerald Jinx "Jerry" Mouse is a fictional character and one of the two titular characters in Metro-Goldwyn-Mayer's series of Tom and Jerry theatrical animated short films and other animated media, usually acting as the protagonist opposite his rival Tom Cat. Created by William Hanna and Joseph Barbera, Jerry is a cute brown mute anthropomorphic house mouse, who first appeared as a mouse named Jinx in the 1940 MGM animated short Puss Gets the Boot. Hanna gave the mouse's original name as "Jinx", while Barbera claimed the mouse went unnamed in his first appearance.

William Denby Hanna was an American animator, voice actor, cartoonist, and musician, who was the creator of Tom and Jerry as well as the creator of the animation studio and production company Hanna-Barbera. 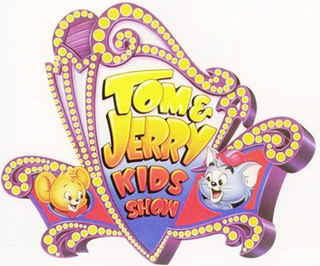 The Tom and Jerry Comedy Show is an American animated television program produced by Filmation for MGM Television featuring the popular cartoon duo Tom and Jerry. The show first aired on September 6, 1980 on CBS and continued until December 13, 1980. Its episodes were eventually added to syndicated Tom and Jerry packages in 1983. Episodes of the show also occasionally appeared on Cartoon Network and Boomerang. 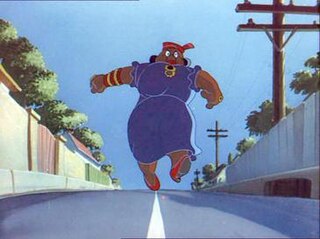 Mammy Two Shoes is a fictional character in MGM's Tom and Jerry cartoons. She is a heavy-set middle-aged African American woman who takes care of the house in which Tom and Jerry reside. Whether she is a housemaid or the owner of the house is never made clear, but the fact that she has her own bedroom in the short "Sleepy Tom" raises the possibility of her being the owner of the house, as no other human is present in the house in shorts she appears. She would scold and attack Tom whenever she believed he was misbehaving; Jerry would sometimes be the cause of Tom's getting in trouble.

MGM Animation/Visual Arts was an American animation studio established in 1962 by animation director/producer Chuck Jones and producer Les Goldman as Sib Tower 12 Productions. Its productions include the last series of Tom and Jerry theatrical shorts, the TV specials Horton Hears a Who and How the Grinch Stole Christmas!, and the feature film The Phantom Tollbooth, all released by Metro-Goldwyn-Mayer.

Tom and Jerry Tales is an American animated television series featuring the cat-and-mouse duo Tom and Jerry. Produced by Warner Bros. Animation and Turner Entertainment, it is the seventh installment in the Tom and Jerry franchise as well as the first Tom and Jerry production to emulate the original theatrical shorts created by Hanna-Barbera founders and former Metro-Goldwyn-Mayer cartoon studio staff William Hanna and Joseph Barbera for Metro-Goldwyn-Mayer; it originally ran in the United States from September 23, 2006 to March 22, 2008 on Kids' WB. This is the first Tom and Jerry television series from Warner Bros. Animation after parent company Time Warner had bought Turner Broadcasting System, then-owners of the franchise, in 1996.

Tot Watchers is a 1958 American one-reel animated Tom and Jerry short produced and directed by William Hanna and Joseph Barbera with music by Scott Bradley. The short was released by Metro-Goldwyn-Mayer on August 1, 1958. It is the 114th and last Tom and Jerry theatrical cartoon produced or directed by both Hanna and Barbera, and the last cartoon short of the series until Gene Deitch's Switchin' Kitten in 1961. Barbera would return to direct one final Tom and Jerry theatrical short, The Karate Guard, in 2005. 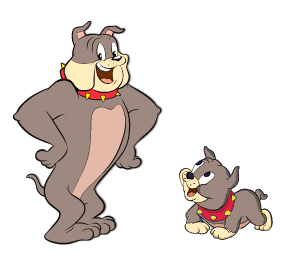 Spike and Tyke are fictional characters from the Tom and Jerry animated film series, created by William Hanna and Joseph Barbera. Spike is portrayed as an American Bulldog, who is generally amiable and friendly, and a loving father to his son Tyke in several episodes. However, Spike's character also has a very stern, and fierce side, for occasions such as when he is defending his son Tyke.