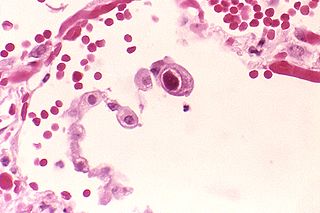 Cytomegalovirus (CMV) is a genus of viruses in the order Herpesvirales, in the family Herpesviridae, in the subfamily Betaherpesvirinae. Humans and monkeys serve as natural hosts. The eight species in this genus include the type species, Human betaherpesvirus 5, which is the species that infects humans. Diseases associated with HHV-5 include mononucleosis, and pneumonia. In the medical literature, most mentions of CMV without further specification refer implicitly to human CMV. Human CMV is the most studied of all cytomegaloviruses.

A satellite is a subviral agent that depends on the coinfection of a host cell with a helper virus for its replication. Satellites can be divided into two major classes: satellite viruses and satellite nucleic acids. Satellite viruses, which are most commonly associated with plants, but are also found in mammals, arthropods, and bacteria, encode structural proteins to enclose their genetic material, which are therefore distinct from the structural proteins of their helper viruses. Satellite nucleic acids, in contrast, do not encode their own structural proteins, but instead are encapsulated by proteins encoded by their helper viruses. The genomes of satellites range upward from 359 nucleotides in length for satellite tobacco ringspot virus RNA (STobRV). 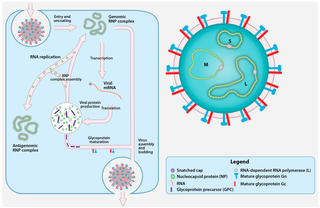 Bunyavirales is an order of segmented negative-strand RNA viruses with mainly tripartite genomes. Member viruses infect arthropods, plants, protozoans, and vertebrates. It is the only order in the class Ellioviricetes. The name Bunyavirales derives from Bunyamwera, where the original type species Bunyamwera orthobunyavirus was first discovered. Ellioviricetes is named in honor of late virologist Richard M. Elliott for his early work on bunyaviruses.

Bromoviridae is a family of viruses. Plants serve as natural hosts. There are currently 36 species in this family, divided among 6 genera.

Tombusviridae is a family of single-stranded positive sense RNA plant viruses. There are currently 76 species in this family, divided among three subfamilies. The name is derived from the type species of the genus Tombusvirus, tomato bushy stunt virus (TBSV). 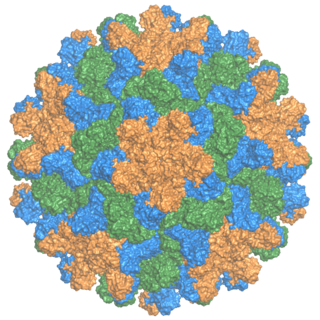 Tomato bushy stunt virus (TBSV) is a virus that is the type species of the tombusvirus family. It was first reported in tomatoes in 1935 and primarily affects vegetable crops, though it is not generally considered an economically significant plant pathogen. Depending upon the host, TBSV causes stunting of growth, leaf mottling, and deformed or absent fruit. The virus is likely to be soil-borne in the natural setting, but can also transmitted mechanically, for example through contaminated cutting tools. TBSV has been used as a model system in virology research on the life cycle of plant viruses, particularly in experimental infections of the model host plant Nicotiana benthamiana.

Beet curly top virus (BCTV) is a pathogenic plant virus of the family Geminiviridae, containing a single-stranded DNA. The family Geminiviridae consists of nine genera based on their host range, virus genome structure, and type of insect vector. BCTV is a Curtovirus affecting hundreds of plants. The only known vector is the beet leafhopper, which is native to the Western United States. 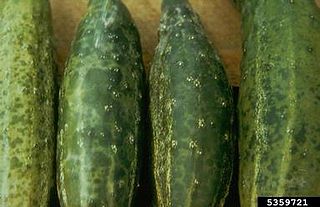 Cucumber mosaic virus (CMV) is a plant pathogenic virus in the family Bromoviridae. It is the type member of the plant virus genus, Cucumovirus. This virus has a worldwide distribution and a very wide host range. In fact it has the reputation of having the widest host range of any known plant virus. It can be transmitted from plant to plant both mechanically by sap and by aphids in a stylet-borne fashion. It can also be transmitted in seeds and by the parasitic weeds, Cuscuta sp. (dodder).

Tobacco necrosis virus A is a plant pathogenic virus of the family Tombusviridae.

Raspberry ringspot virus (RRSV) is a plant pathogenic virus of the family Secoviridae. It was first described by Cadman in 1958. It causes ringspots in raspberries and strawberries and can cause rasp-leaf symptoms in cherry. It also has been found in many other plants including those in the Vitis and Narcissus genera. There are many strains of the virus, the most important including the Scottish strain, the English strain, and the Lloyd George yellow blotch strain. The Scottish strain is the type virus.

Anelloviridae is a family of viruses. They are classified as vertebrate viruses and have a non-enveloped capsid, which is round with isometric, icosahedral symmetry and has a triangulation number of 3. 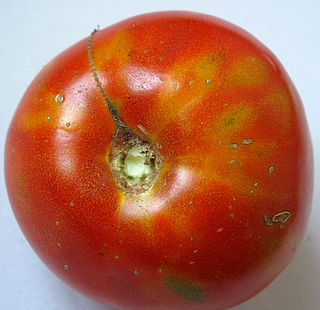 Picobirnavirus is a genus of double-stranded RNA viruses. It is the only genus the family Picobirnaviridae. Although amniotes, especially mammals, were thought to serve as hosts, it has been recently suggested that these viruses might infect bacteria and possibly some other invertebrates. There are currently three species in this genus including the type species human picobirnavirus. Associated symptoms include gastroenteritis in animals and humans, though the disease association is unclear. 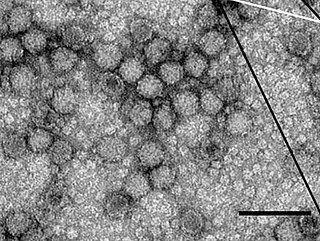 Iflaviridae is a family of positive sense RNA viruses insect-infecting viruses. Some of the insects commonly infected by iflaviruses include aphids, leafhoppers, flies, bees, ants, silkworms and wasps. The name "Ifla" is derived from the name "Infectious flacherie virus", for the type species. There is only one genus (Iflavirus) and 15 species in this family, including the type species Infectious flacherie virus.

Secoviridae is a family of viruses in the order Picornavirales. Plants serve as natural hosts. There are currently 86 species in this family, divided among 8 genera or not assigned to a genus. The family was created in 2009 with the grouping of families Sequiviridae, now dissolved, and Comoviridae, now subfamily Comovirinae, along with the then unassigned genera Cheravirus, Sadwavirus, and Torradovirus.

Hytrosaviridae is a family of double stranded DNA viruses that infect insects.

Nyamiviridae is a family of negative-strand RNA viruses in the order Mononegavirales. Ecdysozoa and birds serve as natural hosts. The name is a portmanteau of Nyamanini Pan and Midway Atoll and the suffix -viridae used to denote a virus family. There are currently twelve species in this family divided among six genera. 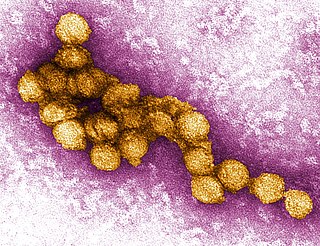 West Nile virus (WNV) is a single-stranded RNA virus that causes West Nile fever. It is a member of the family Flaviviridae, specifically from the genus Flavivirus, which also contains the Zika virus, dengue virus, and yellow fever virus. West Nile virus is primarily transmitted by mosquitoes, mostly species of Culex. The primary hosts of WNV are birds, so that the virus remains within a "bird–mosquito–bird" transmission cycle. 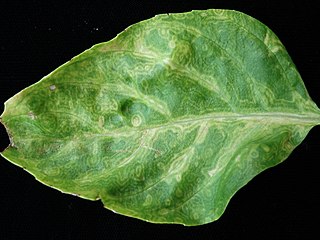 Tomato spotted wilt orthotospovirus (TSWV) is a spherical negative-sense RNA virus that has a diameter between 80-110 nanometers.