Robb began riding in trials and scrambles during 1950. His first event was a road time-trial riding a 197 cc James. He then competed on Irish grasstracks, winning six national titles and a 25-mile sand race between 1954 and 1956, before turning to short circuits on tarmac and road-racing. His first road race was at Lurgan Park, outside of Belfast, in 1957 riding a 197 HJH. He was noticed by Belfast sponsor Terry Hill, himself a trials rider, who provided a 173  MV and a 250 cc NSU Sportmax for 1957 and 1958 with Robb finishing third in the 1957 Ulster Grand Prix and second in the 1958 race. [1] [2]

Robb was then sponsored by tuners Geoff Monty and his business partner Allen Dudley-Ward until joining the works Honda team from 1962, [1] winning his first world championship race in the 1962 250 class at the Ulster Grand Prix with two further wins at the inaugural Japanese Grand Prix in Tokyo. [1]

In the 1962 season, Robb became one of the first non-Japanese riders hired by the Honda factory racing team. He enjoyed his greatest success with Honda, finishing second to his teammate, Jim Redman, in the 1962 350 world championship. [3]

Towards the end of his competitive riding, Robb established a road-race school in conjunction with former Motor Cycle magazine journalist and retail motorcycle shop owner David Dixon, using Yoshimura-equipped CB250, and CB450 Hondas, with Dixon being the UK importer and distributor of Yoshimura tuning equipment. [5] [6] 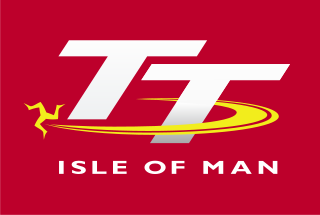 The Isle of Man TT or Tourist Trophy races are an annual motorcycle racing event run on the Isle of Man in May/June of most years since its inaugural race in 1907. The event is often called one of the most dangerous racing events in the world as many competitors have died. 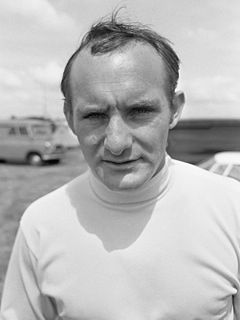 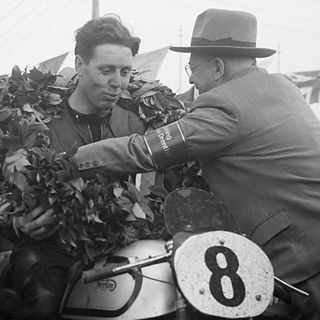 Geoffrey Ernest Duke was a British multiple motorcycle Grand Prix road racing world champion. Born in St. Helens, Lancashire, after retirement from competition he was a businessman based in the Isle of Man. He raced several brands of motorcycle: Norton, Gilera, BMW, NSU and Benelli. 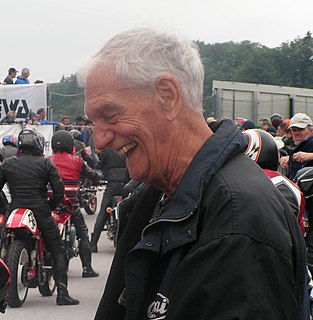 James Albert Redman, is a British-born Zimbabwean former professional motorcycle racer. He competed in Grand Prix motorcycle racing from 1959 to 1966. Redman is notable for being a six-time Grand Prix road racing world champion. In 2012, Redman was named an FIM Legend for his motorcycling achievements. 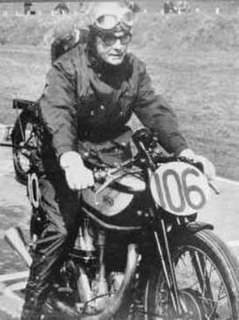 Frederick Lee Frith OBE was a British Grand Prix motorcycle road racing world champion. A former stonemason and later a motor cycle retailer in Grimsby, he was a stylish rider and five times winner of the Isle of Man TT. Frith was one of the few to win TT races before and after the Second World War.

William David Ivy was an English professional Grand Prix motorcycle racer from Maidstone, Kent. He died during practice for a race in East Germany. 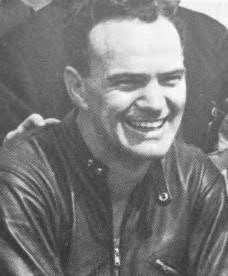 Robert MacGregor McIntyre was a Scottish motorcycle racer. The first rider to achieve an average speed of 100 mph (160 km/h) for one lap of the Snaefell Mountain Course in 1957, McIntyre is also remembered for his five motorcycle Grand Prix wins which included three wins at the Isle of Man TT races, and four victories in the North West 200. He died nine days after injuries sustained racing at Oulton Park, Cheshire, England in August 1962.

Bruce Anstey is a professional motorcycle road racer. He is a former lap record holder on the world-famous Snaefell Mountain Course with a time of 17 minutes 6.682 seconds, at an average speed of 132.298 mph (212.913 km/h) set during the 2014 Superbike TT Race. Anstey was signed to race for the Padgett's Honda Racing Team having previously ridden for TAS Suzuki Racing, Valmoto Triumph and DTR Yamaha. For thirteen consecutive seasons, from 2002 - 2015, Bruce Anstey managed to secure a top three finish at the world's three most prestigious road races; the North West 200, the Isle of Man TT and the Ulster Grand Prix.

Phil Mellor was a Yorkshire, England, based motorcycle racer. His career included racing on both road and race circuits. Mellor, from Shelley, near Huddersfield, West Yorkshire, died after an accident at Doran's Bend during the 1989 TT races on the Isle of Man.