The Tonga ground skink (Tachygyia microlepis) is an extinct species of skink endemic to the island of Tonga.

The moonlight gourami, also known as the moonbeam gourami, is a labyrinth fish of the family Osphronemidae native to Indochina. This peaceful, attractive species is a popular aquarium fish.

This timeline of extinctions is an historical account of species that have become extinct during the time that modern humans have occupied the Earth.

The small-scaled skink is a species of skink in the family Scincidae. It is endemic to New Zealand. The holotype is in the collection of the Museum of New Zealand Te Papa Tongarewa. 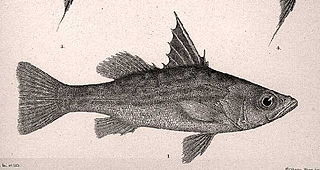 The forktail lates is a species of lates perch endemic to Lake Tanganyika. Juveniles inhabit inshore habitats, moving as adults to open-water pelagic zones where it preys on other fishes. This species can reach a length of 93 centimetres (37 in) TL and the greatest reported weight of this species is 8.3 kilograms (18 lb). It is a commercially important species and is also popular as a game fish.

Perissodus microlepis is a species of cichlid endemic to Lake Tanganyika. This species reaches a length of 11 centimetres (4.3 in) TL. This species can also be found in the aquarium trade. It is a scale-eating 'parasite' on other fish species. It occurs in two distinct morphological forms. One morph has mouth parts twisted to the left, enabling it to eat scales off its victim's right flank. In contrast, the other morph, whose mouth is twisted to the right, eats scales off its victim's left flank. The relative abundance of the two morphs in populations is regulated by frequency-dependent selection.

The smallscale mud carp is a species of ray-finned fish in the genus Cirrhinus.

Oxyurichthys microlepis, the maned goby, is a species of goby native to tropical marine and brackish waters along the coasts of the Indian Ocean from Africa to the western Pacific Ocean where it occurs in estuaries and inshore waters to depths of about 75 metres (246 ft). It occurs in the Mekong Delta and is suspected to use the tidal flow up the river to reach as far inland as Cambodia. This species can reach a length of 13.5 centimetres (5.3 in) TL. It is of minor importance to local commercial fisheries and can also be found in the aquarium trade.

Neobarynotus microlepis is a species of cyprinid fish found is Southeast Asia. It is the only member of its genus.

Plagiognathops microlepis, the smallscale yellowfin, is a species of cyprinid fish found in China and Russia. It is the only member of its genus.

Boesemania is a genus of freshwater fish in the family Sciaenidae. This genus contains the single species Boesemania microlepis. Also known as the boeseman croaker and smallscale croaker, this fish lives in southeast Asian rivers.

Acanthobrama microlepis, called the blackbrow bleak or the Caucasian bream, is a species of freshwater fish in the family Cyprinidae. It reaches a maximum size of 25 cm (9.8 in) TL. The species is found in lakes and rivers of the southwestern Caspian Sea drainage basin, including Sefīd-Rūd, Kura River and Aras River. It has also been introduced to Iraq.

The Indian carplet is a species of carplet in the family Cyprinidae. It is found in India and Bangladesh.

Lepidoblepharis microlepis is a species of gecko, a lizard in the family Sphaerodactylidae. The species is endemic to Colombia. 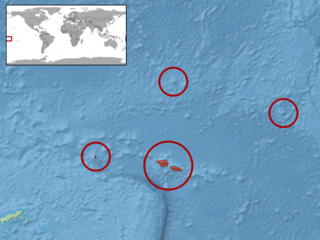 Steindachner's emo skink, Micronesian skink, dark-sided emoia, dark-sided skink, or dateline emoia is a species of lizard in the family Scincidae. It is found in Micronesia. The species has also been noted to occur on Niuafoʻou, the northernmost island of Tonga, with sightings in 1930 and 1994. The species is not present on other Tongan islands, and is possibly present due to waif dispersal occurring during Polynesian migration.

Günther's emo skink or olive small-scaled skink is a species of skink. It is found in Niue, Samoa, and Tonga.

The black emo skink is a species of lizard in the family Scincidae. It is found from the Solomon Islands, Vanuatu, eastward through Fiji to Tonga and western Samoa, Toga, Lo, Tegua, and Hiu Island.

Tropidophorus microlepis, the small-scaled water skink, is a species of skink found in Laos, Vietnam, Cambodia, and Thailand.