Last updated October 10, 2020
This article is about the reptile. For other uses, see Skink (disambiguation).

Skinks look like lizards of the family Lacertidae (sometimes called true lizards), but most species of skinks have no pronounced neck and relatively small legs. Several genera (e.g., Typhlosaurus ) have no limbs at all. This isn't true for all skinks, however, as some species such as the Red Eyed Crocodile Skink have a head that is very distinguished from the body. These lizards also have legs that are relatively proportional to their body size. [3]

The skink skull is covered by substantial bony scales, usually matching up in shape and size, while overlapping. [4] Other genera, such as Neoseps , have reduced limbs and fewer than five toes (digits) on each foot. In such species, their locomotion resembles that of snakes more than that of lizards with well-developed limbs. As a general rule, the longer the digits, the more arboreal the species is likely to be. A biological ratio can determine the ecological niche of a given skink species. The Scincidae ecological niche index is a ratio based on anterior foot length at the junction of the ulna/radius-carpal bones to the longest digit divided by the snout-to-vent length. [5]

Most species of skinks have long, tapering tails they can shed if predators grab onto them. Such species generally can regenerate the lost part of a tail, though imperfectly. A lost tail can grow back within around three to four months. [6] Species with stumpy tails have no special regenerative abilities.

Some species of skinks are quite small; Scincella lateralis typically ranges from 7.5 to 14.5 cm (3.0 to 5.7 in), more than half of which is the tail. [7] Most skinks, though, are medium-sized, with snout-to-vent lengths around 12 cm (4.7 in), although some grow larger; the Solomon Islands skink (Corucia zebrata) is the largest known extant species and may attain a snout-to-vent length of some 35 cm (14 in).

Skinks can often hide easily in their habitat because of their protective colouring (camouflage). [8]

Skinks in the genus Prasinohaema have green blood because of a buildup of the waste product biliverdin. [9]

The word "skink", which entered the English language around 1580–90, comes from classical Greek skinkos and Latin scincus, names that referred to various specific lizards. [10]

Skink-like lizards first appear in the fossil record about 140 million years ago, during the early Cretaceous, mostly in the form of jawbones that appear very skink-like. Definitive skink fossils appear later, during the Miocene period. [11] [12]

Skink genera known from fossils include the following: [13]

A trait apparent in many species of skink is digging and burrowing. Many spend their time underground where they are mostly safe from predators, sometimes even digging out tunnels for easy navigation. They also use their tongues to sniff the air and track their prey. When they encounter their prey, they chase it down until they corner it or manage to land a bite and then swallow it whole. They can be voracious hunters.

Skinks are generally carnivorous and in particular insectivorous. Typical prey include flies, crickets, grasshoppers, beetles, and caterpillars. Various species also eat earthworms, millipedes, centipedes, snails, slugs, isopods (woodlice etc), moths, small lizards (including geckos), and small rodents. Some species, particularly those favored as home pets, are omnivorous and have more varied diets and can be maintained on a regimen of roughly 60% vegetables/leaves/fruit and 40% meat (insects and rodents). [14]

Although most species of skinks are oviparous, laying eggs in clutches, some 45% of skink species are viviparous in one sense or another. Many species are ovoviviparous, the young (Skinklets) developing lecithotrophically in eggs that hatch inside the mother's reproductive tract, and emerging as live births.

In some genera, however, such as Tiliqua and Corucia , the young developing in the reproductive tract derive their nourishment from a mammal-like placenta attached to the female – unambiguous examples of viviparous matrotrophy. [15] Furthermore, an example recently described in Trachylepis ivensi is the most extreme to date: a purely reptilian placenta directly comparable in structure and function, to a eutherian placenta. [16] Clearly, such vivipary repeatedly has developed independently in the evolutionary history of the Scincidae and the different examples are not ancestral to the others. In particular, placental development of whatever degree in lizards is phylogenetically analogous, rather than homologous, to functionally similar processes in mammals. [15]

Skinks typically seek out environments protected from the elements, such as thick foliage, underneath man-made structures, and ground-level buildings such as garages and first-floor apartments. When two or more skinks are seen in a small area, it is typical to find a nest nearby. Skinks are considered to be territorial and often are seen standing in front of or "guarding" their nest area. If a nest is nearby, one can expect to see 10-30 lizards within the period of a month. In parts of the southern United States, nests are commonly found in houses and apartments, especially along the coast. The nest is where the skink lays it white small eggs, they can lay up to 250 eggs at a time. [17]

Skinks are very specific in their habitat as some can depend on vegetation while others may depend on land and the soil. [18] As a family, skinks are cosmopolitan; species occur in a variety of habitats worldwide, apart from boreal and polar regions. Various species occur in ecosystems ranging from deserts and mountains to grasslands.

Many species are good burrowers. More species are terrestrial or fossorial (burrowing) than arboreal (tree-climbing) or aquatic species. Some are "sand swimmers", especially the desert species, such as the mole skink or sand skink in Florida. Some use a very similar action in moving through grass tussocks. Most skinks are diurnal (day-active) and typically bask on rocks or logs during the day.

Raccoons, foxes, possums, snakes, coatis, crows, cats, dogs, herons, hawks, lizards, and other predators of small land vertebrates also prey on various skinks. This can be troublesome, given the long gestation period for some skinks, making them an easy target to predators such as the mongoose, which often threaten the species to at least near extinction, such as the Anguilla Bank skink. Invasive rodents are a major threat to skinks that has been overlooked, especially tropical skinks. [19]

Skinks are also hunted for food by indigenous peoples in New Guinea, including by the Kalam people in the highlands of Madang Province, Papua New Guinea. [20]

Many genera, Mabuya for example, are still insufficiently studied, and their systematics are at times controversial, see for example the taxonomy of the western skink, Eumeces skiltonianus. Mabuya in particular, is being split, many species being allocated to new genera such as Trachylepis , Chioninia , and Eutropis .

Egernia is a genus of skinks that occurs in Australia. These skinks are ecologically diverse omnivores that inhabit a wide range of habitats. However, in the loose delimitation the genus is not monophyletic but an evolutionary grade, as has long been suspected due to its lack of characteristic apomorphies.

Emoia is a genus of skinks, lizards in the subfamily Eugongylinae. The genus Emoia belongs to a group of genera mainly from the southwestern Pacific-Australian region.

Lampropholis, the Indo-Australian ground skinks or sunskinks, are a genus of skinks in the lizard subfamily Eugongylinae. The genus Lampropholis was previously found to belong to a clade with the genera Niveoscincus, Leiolopisma and others of the Eugongylus group within Lygosominae. They are found mainly in Indonesia and Australia. For similar skinks see genera Bassiana, Pseudemoia, and Niveoscincus.

Mabuya is a genus of long-tailed skinks restricted to species from various Caribbean islands. They are primarily carnivorous, though many are omnivorous. The genus is viviparous, having a highly evolved placenta that resembles that of eutherian mammals. Formerly, many Old World species were placed here, as Mabuya was a kind of "wastebasket taxon". These Old World species are now placed in the genera Chioninia, Eutropis, and Trachylepis. Under the older classification, the New World species were referred to as "American mabuyas", and now include the genera Alinea, Aspronema, Brasiliscincus, Capitellum, Maracaiba, Marisora, Varzea, and Copeoglossum. 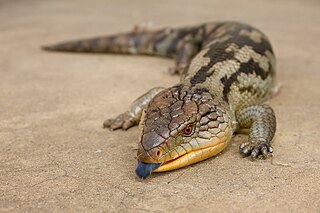 Blue-tongued skinks comprise the Australasian genus Tiliqua, which contains some of the largest members of the skink family (Scincidae). They are commonly called blue-tongued lizards or simply blue-tongues or blueys in Australia. As suggested by these common names, a prominent characteristic of the genus is a large blue tongue that can be bared as a bluff-warning to potential enemies. Blue-tongued skinks are also bred in captivity and sold as house pets. They are relatively shy in comparison with other lizards, and also significantly slower due to their short legs.

Eutropis bibronii, also known commonly as Bibron's skink or the seashore skink, is a species of skink, a lizard in the family Scincidae. The species is endemic to India and Sri Lanka. 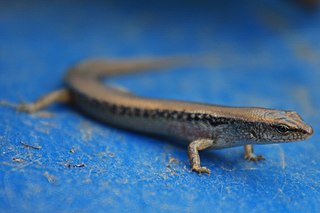 Scincella reevesii is a species of skink, a lizard in the family Scincidae. The species is endemic to Asia.

Trachylepis is a skink genus in the subfamily Lygosominae found mainly in Africa. Its members were formerly included in the "wastebin taxon" Mabuya, and for some time in Euprepis. As defined today, Trachylepis contains the clade of Afro-Malagasy mabuyas. The genus also contains a species from the Brazilian island of Fernando de Noronha, T. atlantica, and may occur in mainland South America with Trachylepis tschudii and Trachylepis maculata, both poorly known and enigmatic. The ancestors of T. atlantica are believed to have rafted across the Atlantic from Africa during the last 9 million years.

Acontinae is a subfamily of limbless skinks within the family Scincidae. 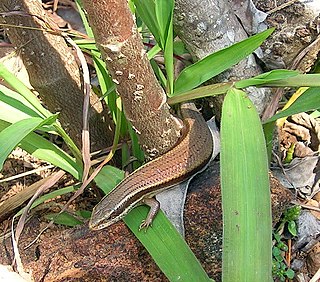 Lygosominae is the largest subfamily of skinks in the family Scincidae. The subfamily can be divided into a number of genus groups. If the rarely used taxonomic rank of infrafamily is employed, the genus groups would be designated as such, but such a move would require a formal description according to the ICZN standards.

The African striped skink, commonly called the striped skink, is a species of lizard in the skink family (Scincidae). The species is widespread in East Africa and Southern Africa. It is not a close relation to the Australian striped skink, Ctenotus taeniolatus.

The Noronha skink is a species of skink from the island of Fernando de Noronha off northeastern Brazil. It is covered with dark and light spots on the upperparts and is usually about 7 to 10 cm in length. The tail is long and muscular, but breaks off easily. Very common throughout Fernando de Noronha, it is an opportunistic feeder, eating both insects and plant material, including nectar from the Erythrina velutina tree, as well as other material ranging from cookie crumbs to eggs of its own species. Introduced predators such as feral cats prey on it and several parasitic worms infect it.

Trachylepis tschudii is an enigmatic skink, purportedly from Peru. First described in 1845 on the basis of a single specimen, it may be the same as the Noronha skink (T. atlantica) from Fernando de Noronha, off northeastern Brazil. T. tschudii represents one of two doubtful records of the otherwise African genus Trachylepis on mainland South America; the other is T. maculata from Guyana.

Saiphos equalis, commonly known as the yellow-bellied three-toed skink or simply three-toed skink, is a species of burrowing skink found in eastern Australia. It is the only species classified under the genus Saiphos.

Bayão’s skink, Bayon's mabuya, or Bayon’s skink is a species of skink, a lizard in the family Scincidae. The species is endemic to Africa.

Rodenburg's mabuya is a species of skink, a lizard in the family Scincidae. The species is endemic to West Africa.

Eugongylinae is a subfamily of skinks within the family Scincidae. The genera in this subfamily were previously found to belong the Eugongylus group in the large subfamily Lygosominae.

Egerniinae is the subfamily of social skinks within the family Scincidae. The genera in this subfamily were previously found to belong the Egernia group in the large subfamily Lygosominae.

Mabuyinae is a subfamily of skinks within the family Scincidae. The genera in this subfamily were previously found to belong the Mabuya group in the large subfamily Lygosominae.