Anthony Neary (born 25 November 1948) [2] is a former England international rugby union player. He represented England at U18s basketball as well as rugby. He attended De La Salle College in Pendleton, Salford and Liverpool University before qualifying as a solicitor.

Neary played club rugby for Broughton Park. An open-side wing-forward whose international career ran from 1971 to 1980, his 43 appearances for the England team were a record (subsequently beaten) at the time of his retirement. He captained England in seven international matches between March 1975 and March 1976, played for the Barbarians, and toured twice with the British and Irish Lions - to South Africa in 1974 and New Zealand in 1977, playing one international. He was a member of the famous North team which beat the All Blacks at Otley on 17 November 1979. He was one of four Broughton Park players in this side and was joined by teammates Kevin O’Brien at full back, Tony Bond in the centre and Jim Sydall in the second row. [3] Along with Broughton Park team mate Mike Leadbetter, he was also part of a famous North West Counties team which defeated the All Blacks, 16-14, in Workington in 1972. [3]

Neary was jailed for theft in February 1998 after admitting stealing money from a trust fund of millionaire friend John Gorna. After his release, he commented on living in London since his release - recently said: "I don't follow rugby any more, I'm just looking to get on with my life." [3] [4]

Samuel Arthur Doble was an English rugby union full-back who played international rugby for England and club rugby for Moseley. He was a Wolverhampton school teacher by profession. Doble won only three caps for his country, but he was one of the game's most popular characters and his death in 1977 at the age of 33 was mourned throughout English rugby. 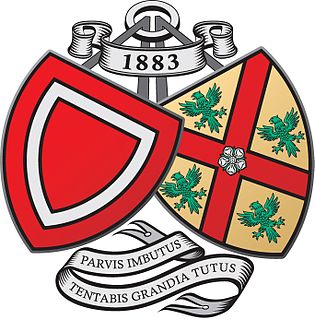 Barnard Castle School is a co-educational independent day and boarding school in the market town of Barnard Castle, County Durham, in the North East of England. It is a member of The Headmasters' and Headmistresses' Conference (HMC). It was founded in 1883 with funding from a 13th-century endowment of John I de Balliol and the bequest of the local industrialist Benjamin Flounders. The ambition was to create a school of the quality of the ancient public schools at a more reasonable cost, whilst accepting pupils regardless of their faith.

Philip John Larder MBE, is an English rugby league and rugby union coach, and former player in both codes.

Tony Roy Iro is the head coach of the Cook Islands national rugby league team, and a former rugby league footballer. He is a former New Zealand international player - a veteran of 25 Tests, playing either on the wing or in the second row.

The 1975 England rugby union tour of Australia was a series of eight matches played by the England national rugby union team in Australia in May and June 1975. England won only four of the eight matches and lost both internationals to Australia. In addition to the two test defeats they also lost to the Sydney and New South Wales Country representative teams. 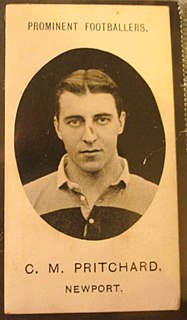 Charles Meyrick Pritchard was a Welsh international rugby union player. He was a member of the winning Welsh team who beat the 1905 touring All Blacks. He played club rugby for Newport RFC and county rugby for Monmouthshire. Pritchard was one of 13 Wales international players to be killed serving in the First World War.

Ernest Knapman was an English rugby union and professional rugby league footballer who played in the 1920s. He played representative level rugby union (RU) for England (non-Test), South of England and Devon, and at club level for Torquay RUFC, as a fullback, i.e. number 15, and representative level rugby league (RL) for Great Britain and England, and at club level for Oldham, as a fullback, i.e. number 1.

Frank William Whitcombe, also known by the nickname of "The Big Man", was a Welsh rugby union, and professional rugby league footballer who played in the 1930s and 1940s. He played rugby union (RU) for Cardiff RFC, London Welsh RFC, Aldershot Services and Army Rugby Union, as a prop, i.e. number 1 or 3, and representative level rugby league (RL) for Great Britain, Rugby League XIII, and Wales, and at club level for Broughton Rangers and Bradford Northern, as a prop, i.e. number 8 or 10, during the era of contested scrums. 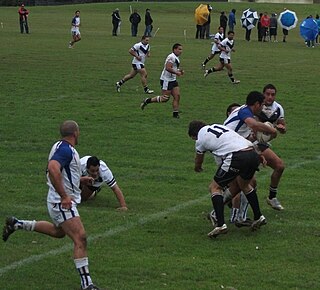 The New Zealand rugby league season 2010 was the 103rd season of rugby league that was played in New Zealand. The main feature of the year was the new National Zonal competition run by the New Zealand Rugby League. The premier teams competed for the Albert Baskerville Trophy, which was won by Auckland when they defeated Counties Manukau 14 - 6 in the Grand Final. 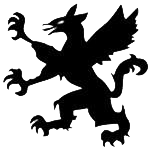 Kevin O'Brien is a former rugby union international who represented Ireland from 1980 to 1981.

Michael Maurice Leadbetter (1946–2009) was a rugby union international who represented England in 1970.

Barry K. Jackson was a rugby union international who represented England in 1970.

Tony Bond, is a former rugby union international who represented England from 1978 to 1982.