He won a total of 51 England caps and captained the team on three occasions, retiring from international rugby in 2004.

Bracken was born in Dublin, Ireland. His father was a dentist and his mother had played hockey for Ireland. They originally lived in Balbriggan but moved to England when Bracken was four.

He was brought up in Liverpool and was educated at St. Edward's College, and later at Stonyhurst College in Lancashire, where he was coached by former England Rugby Union Head Coach, Brian Ashton. [2] He attended a trial for Liverpool FC and scored three goals. He also flirted with the idea of playing rugby league for St. Helens.

After school he read Law at the University of Bristol whom he represented at rugby union and later qualified as a solicitor. He was turned down by Ireland as 'not good enough' but signed up by Bristol.

Bracken made his England debut in November 1993 against the All Blacks. However, a stamp from Jamie Joseph seriously injured his ankle, putting him out of action for three months and leaving him with a permanent weakness. He started the 1994 Five Nations, but was dropped halfway through in favour of Dewi Morris. He missed the summer tour to South Africa, studying for law exams, but played in the 1995 Five Nations. Injury kept him out of the 1995 World Cup.

Bracken joined Saracens in 1996 and was part of the team that won the Tetley's Bitter Cup against Wasps in 1998.

He missed out on selection for the 1997 British and Irish Lions tour to South Africa in favour of Matt Dawson and Austin Healey, but was called up as injury replacement for Rob Howley but did not play in the tests.

He then became an irregular scrum half for England, with Dawson generally having the upper hand but being frequently injured. Bracken himself had a serious back injury that kept him out for most of the 1999-2000 season, including the 1999 World Cup.

He missed out on selection for 2001 Lions tour to Australia, instead captaining England on a three match development tour of North America. By then he was mostly having to compete with Matt Dawson as first-choice "number 9". In 2003 he played in the summer tour beating Australia and New Zealand. He appeared four times for England during the 2003 World Cup, mostly as a substitute or blood replacement, becoming a world-cup winner as England lifted the trophy. He won his 50th cap against Wales in the quarter-final, and gained his last cap in the semi-final against France.

Bracken was also the player who drew groans from the cast of Friends after being tackled in the episode "The One with All the Rugby".

Bracken starred in and won ITV's celebrity ice dancing competition Dancing on Ice in 2007, with partner Melanie Lambert. In the semi-final he received the highest score in the history of Dancing on Ice at that time (29.5 out of a possible 30) matched only by rival Clare Buckfield the next week. He was then was voted into the final alongside actress Clare Buckfield and former Blue member Duncan James.

He won the final on 17 March 2007 after a performance which included the required element of "flying" on wires and a final performance of Bolero.

On 24 March 2007 he won the special edition of Dancing on Ice 'The Champion of Champions', after repeating his record 29.5-point score.

He toured with Holiday on Ice in their show "Romanza".

Bracken made an appearance during preparations for Dancing on Ice 2008, week 5, to help contestant and friend Steve Backley with his performance. After finishing the tour with Holiday on Ice Bracken has confirmed he was appearing in the Dancing on Ice Live tour 2008.

He also created his own Ice Party, held at the Hand Stadium, home of Clevedon Town, which starred himself, Clare Buckfield, Suzanne Shaw and many world-famous skaters.

Bracken placed 5th in the 2014 'all stars' series of Dancing on Ice being eliminated in the Quarter-Finals. He was partnered with professional ice skater Nina Ulanova.

Bracken and his wife, Victoria, have three sons, [3] Charlie, Jack and Lochlan, and they live in Hadley Wood.

Bracken is an Honorary President of the rugby charity Wooden Spoon improving the lives of disadvantaged children and young people in Britain and Ireland. He is also an Ambassador of the Royal National Children's Foundation (formerly the Joint Educational trust) which helps support vulnerable, disadvantaged young people at state and independent boarding schools throughout the UK.

In 2009 he presented awards for Amersham & Wycombe College in their first awards ceremony.

Austin Sean Healey (born 26 October 1973 in Wallasey, is a former English rugby union player who played as a utility back for Leicester Tigers, and represented both England and the British and Irish Lions.

Saracens Football Club are an English professional rugby union football club based in London, England. Established in 1876, they play in the Gallagher Premiership, the Top level of rugby in England. They are the current title holders of the European Rugby Champions Cup, a tournament which they have won more times than any other English team, with three titles, won in 2016, 2017 and 2019. They are the current title holders of Premiership Rugby having defeated Exeter Chiefs in the Premiership Final in June 2019. 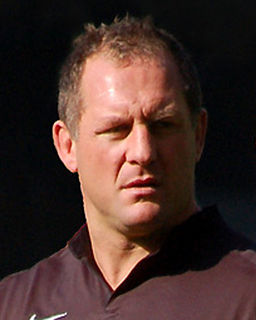 Richard Anthony Hill is a former rugby union footballer who played as a flanker for Saracens and England.

Matthew James Sutherland Dawson, MBE is an English retired rugby union player who played scrum half for Northampton Saints and then London Wasps. During his international career he toured with the British and Irish Lions three times and was part of England's 2003 Rugby World Cup winning side. He won 77 caps for his country in total, including nine as captain and was England's most capped scrum half until passed by Danny Care.

Harry Alistair Ellis is a retired English rugby union footballer who played scrum half for Leicester Tigers, England and the British & Irish Lions. 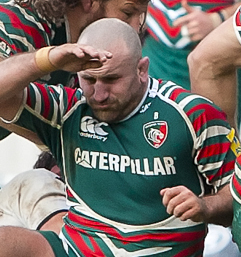 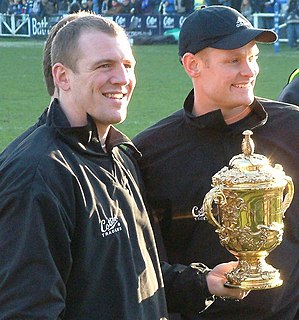 Iain Robert Balshaw, MBE is an English former rugby union player who played on the wing or at full back for Bath, Leeds Carnegie, Gloucester and Biarritz Olympique. He won 35 international caps for England between 2000 and 2008, and 3 for the British and Irish Lions in 2001. He was a member of the England squad that won the 2003 Rugby World Cup.

Trevor James Woodman MBE is a former English rugby union footballer. He was born in Plymouth, but went to Liskeard School in Cornwall and won representative honours with Cornwall Under 16s.

Daniel Jonathan Grewcock MBE is a retired English rugby union player. A lock, he played for Coventry, Saracens and Bath. He won 69 caps for England and 5 for the British and Irish Lions. 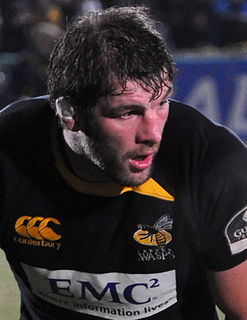 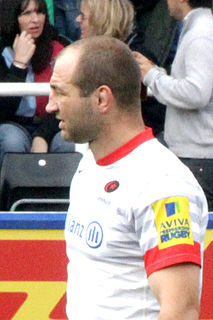 William Brian Ashton MBE is an English rugby union coach and former player. He has been head coach of the England and Ireland national teams.

Clare Buckfield is an English actress, best known for playing the role of Jenny Porter in the BBC sitcom 2point4 Children for most of the nineties and Natasha Stevens in the CBBC series Grange Hill.

Peter Bracken is a rugby union coach and former player and retired cage fighter. He played as a prop, primarily at tighthead. 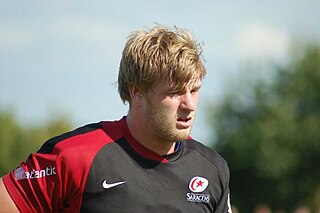 The 1993 England rugby union tour of Canada was a series of five matches played by the England national rugby union team in Canada in May and June 1993. The English team won four matches and lost one. They drew their two match international series against the Canada national rugby union team, losing the first game and winning the second to share the series one-all. Sixteen England players were taking part in the 1993 British Lions tour to New Zealand at the time so the team was not fully representative of England's strength. England did not award full international caps for the matches with Canada.