top (table of processes) is a task manager program, found in many Unix-like operating systems, that displays information about CPU and memory utilization.

The program produces an ordered list of running processes selected by user-specified criteria, and updates it periodically. Default ordering is by CPU usage, and only the top CPU consumers are shown. top shows how much processing power and memory are being used, as well as other information about the running processes. Some versions of top allow extensive customization of the display, such as choice of columns or sorting method. top is useful for system administrators, as it shows which users and processes are consuming the most system resources at any given time.

There are several different versions of top. The traditional Unix version was written by William LeFebvre and originally copyrighted in 1984. [1] It is hosted on SourceForge, [2] and release 3.7 was announced in 2008. [3]

The Linux version of top is part of the procps-ng group of tools. It was originally written by Roger Binns [4] but shortly thereafter taken over by others. [5]

On Solaris, the roughly equivalent program is prstat. Microsoft Windows has the tasklist command and the graphical Task Manager utility. IBM AIX has an updating running processes list as part of the topas and topas_nmon commands.

The ps program is similar to top, but instead produces a snapshot of processes taken at the time of invocation. top's n (number of iterations) option can product a similar result, causing the program to run the specified number of iterations, then exit after printing its output.

AIX is a series of proprietary Unix operating systems developed and sold by IBM for several of its computer platforms. Originally released for the IBM RT PC RISC workstation, AIX now supports or has supported a wide variety of hardware platforms, including the IBM RS/6000 series and later POWER and PowerPC-based systems, IBM System i, System/370 mainframes, PS/2 personal computers, and the Apple Network Server.

Processor affinity, or CPU pinning or "cache affinity", enables the binding and unbinding of a process or a thread to a central processing unit (CPU) or a range of CPUs, so that the process or thread will execute only on the designated CPU or CPUs rather than any CPU. This can be viewed as a modification of the native central queue scheduling algorithm in a symmetric multiprocessing operating system. Each item in the queue has a tag indicating its kin processor. At the time of resource allocation, each task is allocated to its kin processor in preference to others.

In UNIX computing, the system load is a measure of the amount of computational work that a computer system performs. The load average represents the average system load over a period of time. It conventionally appears in the form of three numbers which represent the system load during the last one-, five-, and fifteen-minute periods.

Uptime is a measure of system reliability, expressed as the percentage of time a machine, typically a computer, has been working and available. Uptime is the opposite of downtime.

In Unix-like operating systems, /dev/random, /dev/urandom and /dev/arandom are special files that serve as pseudorandom number generators. They allow access to environmental noise collected from device drivers and other sources. /dev/random typically blocks if there is less entropy available than requested; /dev/urandom typically never blocks, even if the pseudorandom number generator seed was not fully initialized with entropy since boot. /dev/arandom blocks after boot until the seed has been securely initialized with enough entropy, and then never blocks again. Not all operating systems implement the same methods for /dev/random and /dev/urandom and only a few provide /dev/arandom.

nice is a program found on Unix and Unix-like operating systems such as Linux. It directly maps to a kernel call of the same name. nice is used to invoke a utility or shell script with a particular CPU priority, thus giving the process more or less CPU time than other processes. A niceness of -20 is the highest priority and 19 is the lowest priority. The default niceness for processes is inherited from its parent process and is usually 0. 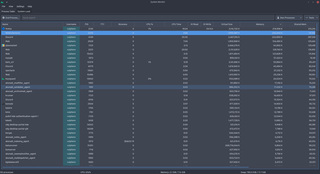 A task manager is a system monitor program used to provide information about the processes and applications running on a computer, as well as the general status of the computer. Some implementations can also be used to terminate processes and applications, as well as change the processes' scheduling priority. In some environments, users can access a task manager with the Control-Alt-Delete keyboard shortcut.

The proc filesystem (procfs) is a special filesystem in Unix-like operating systems that presents information about processes and other system information in a hierarchical file-like structure, providing a more convenient and standardized method for dynamically accessing process data held in the kernel than traditional tracing methods or direct access to kernel memory. Typically, it is mapped to a mount point named /proc at boot time. The proc file system acts as an interface to internal data structures in the kernel. It can be used to obtain information about the system and to change certain kernel parameters at runtime (sysctl).

In computing, preemption is the act of temporarily interrupting a task being carried out by a computer system, without requiring its cooperation, and with the intention of resuming the task at a later time. Such changes of the executed task are known as context switches. They are normally carried out by a privileged task or part of the system known as a preemptive scheduler, which has the power to preempt, or interrupt, and later resume, other tasks in the system.

In computing, a dynamic linker is the part of an operating system that loads and links the shared libraries needed by an executable when it is executed, by copying the content of libraries from persistent storage to RAM, filling jump tables and relocating pointers. The specific operating system and executable format determine how the dynamic linker functions and how it is implemented.

A system monitor is a hardware or software component used to monitor system resources and performance in a computer system.

mpstat is a computer command-line software used in unix-type operating systems to report processor related statistics. It is used in computer monitoring in order to diagnose problems or to build statistics about a computer's CPU usage.

nmon is a computer performance system monitor tool for the AIX and Linux operating systems. The nmon tool has two modes a) displays the performance stats on-screen in a condensed format or b) the same stats are saved to a comma-separated values (CSV) data file for later graphing and analysis to aid the understanding of computer resource use, tuning options and bottlenecks. 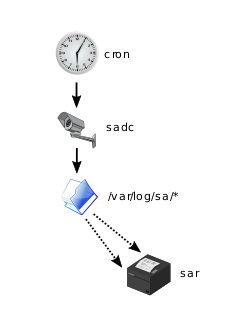 ptrace is a system call found in Unix and several Unix-like operating systems. By using ptrace one process can control another, enabling the controller to inspect and manipulate the internal state of its target. ptrace is used by debuggers and other code-analysis tools, mostly as aids to software development.